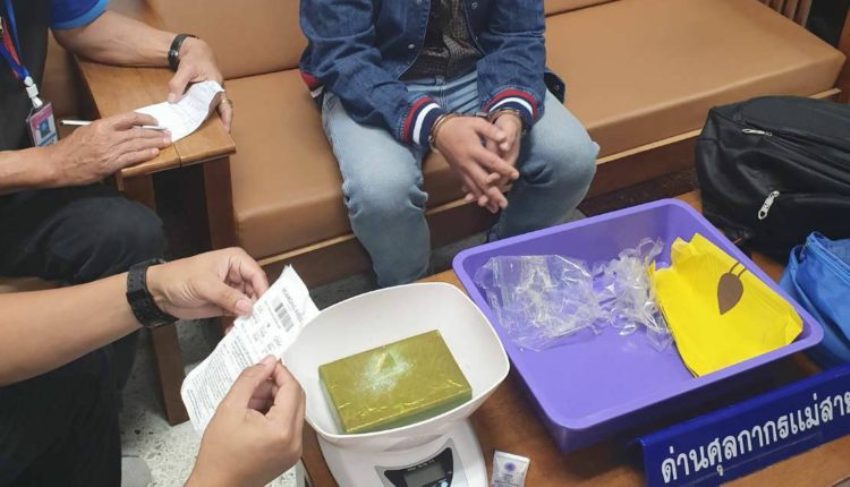 Authorities at Chiang Rai’s Mae Fah Luang Airport have arrested a 27 year-old man for trying to smuggle heroin on a flight to Bangkok. Mr. Jatuporn Saeuan, was detained and searched after security found him acting suspiciously.

According to airport security officers Mr. Jatuporn kept wandering back and forth in front of the entrance to Mae Fah Luang Airport. Finding his actions suspicious security personnel asked to search his luggage. His luggage was put through the airport x-ray and he proceeded through the personal scanner.

Upon raising his arms for scanning an airport security official noticed a yellow plastic bag tucked into the back of his trousers. The security staff opened the package to find it contained a white power. Mr. Jatuporn was then led to the airport security office where the white powder was tested. Upon a test the liquid turned purple indicating a narcotic.

Airport security then contacted police at the BanDu detachment to take Mr. Jatuporn into custody for prosecution.

Police Lt. Colonel Ratchapol told Thai media that under questioning Mr. Jatuporn admitted to travelling to Myanmar to buy the heroin. He snuck across the border at Mae Sai, Chiang Rai into Tachilek Province Myanmar. There he met an unnamed man and purchased the heroin. He then suck back into Thailand with help from the heroin dealer.

Mr. Jatuporn then drove to Chiang Rai’s Mae Fah Luang Airport where he was subsequently arrested. The man further admitted that he had planned to sell the heroin in Bangkok to make a tidy profit.

He has been charged with possession of an illegal narcotic with the intent to sell. He faces up to a 100,000 baht fine and or 10 years in jail.