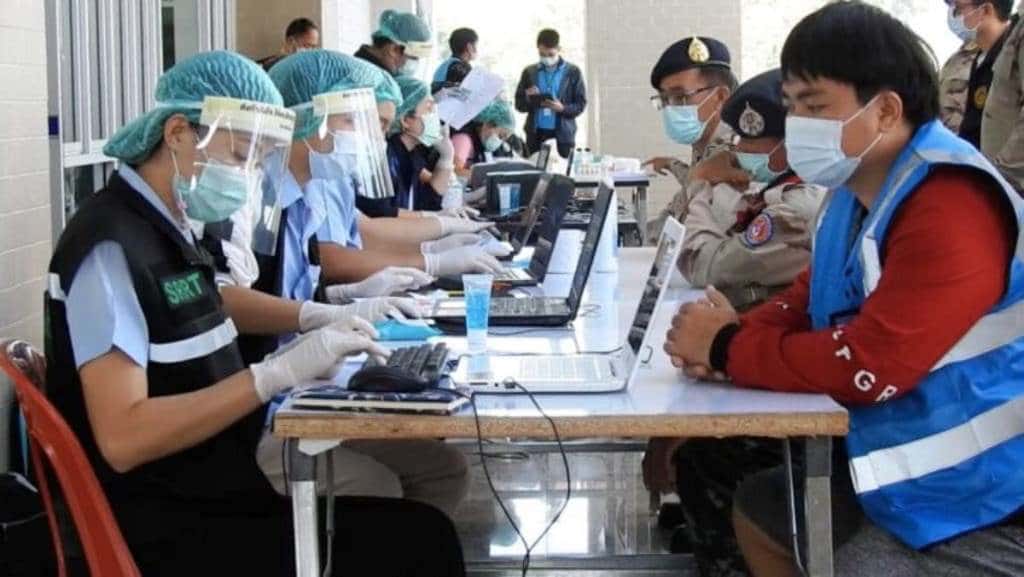 Thai Health officials have prepared a second hospital to receive Covid-19 patients, with six new cases reported in Chiang Rai. Among Thai people returning from working in the border town of Tachilek, in Myanmar.

Chiang Rai governor Prachon Pratsakul on Monday announced the six new infections found in Thai returnees, which had not yet been included in the daily update by the Centre for Covid-19 Situation Administration.

The centre reported on Monday that nine Thais returning from Tachilek were among 21 new cases. The six new cases in Chiang Rai will be added in the centre’s tally on Tuesday, for a total of 15.

Provincial public health chief Thossathep Boonthong said the new cases included four women who worked at  the 1G1-7 Hotel in Tachilek. They returned and reported to authorities last Wednesday. Their tests on Sunday confirmed their infections.

The other two women had worked at the Hollywood nightclub and Karaoke bar in the Myanmar town, and returned on Saturday. Their tests on Sunday were also positive. All are being treated at Chiang Rai Prachanukroh Hospital in Muang district.

Infections on the Rise

Thailand has 38 cases directly and indirectly linked to people returning from Tachilek, 26 of them found in Chiang Rai, since the first was detected on Nov 24.

With the number of infections found in Chiang Rai on the rise, officials in Chiang Rai are working with their Myanmar counterparts. The Thai-Myanmar Border Committee (TBC) is encouraging Thais working in Tachilek, Myanmar town to return through the official border checkpoint. Its at the second Thai-Myanmar Friendship Bridge, hoping to contain the outbreak.

But although they return through the checkpoint they will still be charged with crossing illegally, because the border is officially closed.

Deputy provincial governor Narong Rojanasothorn said at least 42 Thais were due to return from Tachilek on Monday. “We are closely coordinating with Myanmar through the TBC,” Mr Narong told the Bangkok Post.

The hotspot in Tachilek is the 1G1-7 Hotel. It promotes itself as an entertainment complex and is just 1.5 kilometres from the Thai border, Mae Sai district, and 2-3km from the permanent border crossing. It has foreign investors and offers a full range of pubs, young women, drinks, karaoke and also a casino.

Hundreds of Thais work there, according to Sophon Iamsirithaworn, director of the Communicable Diseases Division. The hotel has been closed since Nov 24 due to the coronavirus outbreak in that area of Myanmar.

Chiang Rai authorities also said they expect more Thais will flee Tachilek in fear of catching the virus. Chiang Rai uses Chiang Rai Prachanukroh Hospital as the main base to treat infected people, including those from the Myanmar town.

He sought to ease concerns about the virus situation in the province, saying the cases from Tachilek were not severe infections, and health personnel could handle them.

The provincial health chief also said the new facility at the university was prepared because authorities do not know how many Thais intend to return from Myanmar.

How Athletes Can Fight Drug Abuse And Effectively Overcome It