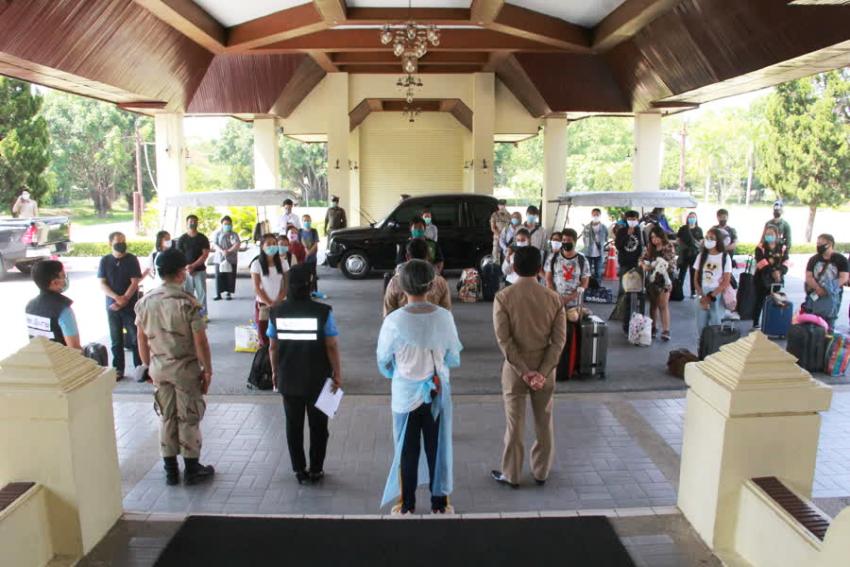 The Deputy Governor of Chiang Rai, Prasert Jittpleecheep, welcomed the 26 returnees. He asked them to adhere to the precautionary measures set by the health department. Thorough screening is said to have been conducted by Chiang Rai health officials. They have also been reminded to consume well cooked food; use a personal serving spoon when eating meals; wash their hands regularly; practice social distancing and above all wear face masks at all times.

The hotels have been health department approved for Thai people returning from abroad. Some 2,000 returnees are being quarantined there for 14 days. The 400 Thais returnees, had been stranded in Italy, Malaysia, Japan and Taiwan. They arrived at Suvarnabhumi Airport before traveling to the quarantine facilities in Chonburi.

hai department health officials on Thursday reported 11 returnees from overseas were all tested positive for the covid-19 coronavirus. Of the 11 returnees five of them masseurs, raising Thailand’s total covid-19 cases to 3,065. The health department also stated that there were no new deaths.

D. Taweesilp Visanuyothin, spokesman for the Health department, said one new case was a 32 year-old Thai woman, 32. She returned from India last Friday. She had no symptoms and was quarantined in Samut Prakan province. On Monday she tested positive for the virus and was sent to a hospital in Samut Prakan.

Six other cases were aged 27-52 years and had returned from working in Qatar. Five of them were masseurs and the other a maid. They were quarantined in Bangkok and tested positive on Tuesday. Three of them were asymptomatic and the others had sore throats. They also had no sense of smell or taste, headaches, muscle pain and excessive phlegm.

All that tested positive are also in Quarantine

The four other cases were male construction workers aged 39-51. They had been in the employ of a foreign company in Kuwait. The workers also returned on Sunday, and quarantined in Bangkok. They also tested positive for covid-19 on Tuesday. Furthermore they had headaches, no sense of smell, runny noses and fever.

“We can say that there are no new locally infected covid-19 cases as far as official reports are concerned. Even more all the new cases reported daily were infected in other countries,” Dr Taweesilp said.

Of the 3,065 accumulated cases, 2,945 (96%) had recovered with 14 more patients released over the previous 24 hours. Sixty-three patients remained at hospitals. The death toll remained at 57.

Since February, 128 covid-19 cases in Thailand, mostly Thais, were detected at quarantine facilities. Or 0.47% of all quarantined people, Dr Taweesilp said.