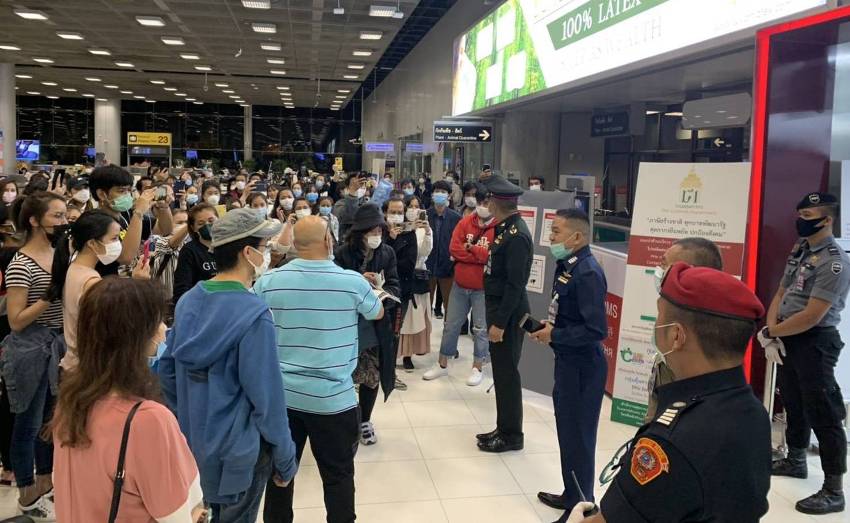 The citizens were returning home to be with family during the Covid-19 coronavirus pandemic.

However, many were unaware of strict government measures introduced on Thursday. Requiring all arrivals to be quarantined for 14 days and undergo government health checks.

Furthermore, a curfew that became active at 10pm that prohibited them from leaving the airport building. Cars, taxis and trains were banned and violators faced up to two years in prison.

The rules sparked chaos in the flight-side arrivals area near the baggage carousels. Some passengers allegedly tried to run past airport security guards and health personnel.

Footage shows crowds of jet-lagged passengers – who thought they would be heading straight home after long flights – angrily surrounding police.

An officer says that he is ”taking orders from the government” and the passengers would have to go to a quarantine facility for 14 days.

Thailand had already banned any non-residents from entering the country on March 26 but citizens were allowed to return if they had a letter from their Embassy and a ‘fit to fly’ certificate before boarding.

Prime Minister Prayut Chan-o-cha introduced the strict new rules as it needs time to properly prepare for state quarantine. “Related agencies will coordinate with Thai embassies to ensure all Thais returning home will be quarantined and get proper medical checks,” he said.

Dr Taweesin Visanuyothin, spokesman of the government’s Centre for Covid-19 Situation Administration, said the new measures started immediately on Thursday and would continue until April 15.

Furthermore ff the number of arrivals does not drop, people in our country will be infected, he said.

Military Ordered to Assist Police with Enforcing Curfew in Thailand