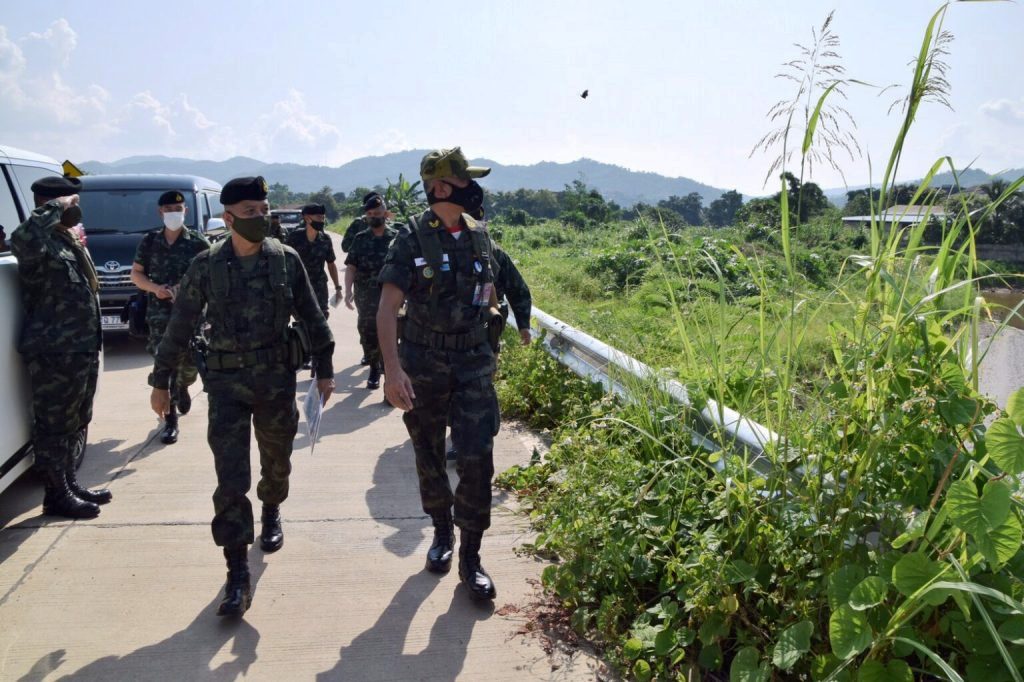 Border security has been stepped up due to concerns of covid-19 infected migrants crossing from Myanmar into Thailand. The Ministry of Public Health is about Covid-19 infections in Myanmar following predictions that the virus could reach the Thai-Myanmar border within weeks.

The director of the Division of Communicable Diseases, Sophon Iamsirithavorn, said the Covid-19 situation in Myanmar was a great concern as the country was now reporting more than 100 cases per day in many cities.

The disease had started to spread from Rakhine state on the west coast to the central region, he said, and although Myanmar’s Covid-19 hotspots were still far from Thailand, it was forecast that the virus would spread to the border areas in two weeks’ time.

Dr Sophon said stringent measures had already been put in place along Thailand’s borders with Myanmar.

Col Akekapong Krittayakiatchuti, Commander of the 12th Ranger Forces Regiment on Monday led a team of officers to at-risk patrol areas along the Thai-Cambodia borders. In Aranyaprathet district, Sa Kaeo, including the famous Rong Kluea Market, in an effort to prevent Covid-19 entering Thailand.

Three Cambodian men were arrested while crawling under razor wire fences from Cambodia. Consequently they were all immediately screened for Covid-19.

They admitted trying to sneak into Thailand to sell goods at the market. Saying they used to be stall vendors there but the pandemic had prevented them from reentering Thailand.

The Department of Disease Control on Monday reported the results of Covid-19 investigations after a male inmate tested positive for the virus on Sept 3, saying that 520 of 990 people who had been in contact with him had tested negative for the virus.

Bangkok governor Aswin Kwanmuang said the Department of Health of the Bangkok Metropolitan Administration had dispatched a team to the condominium where the infected man lived and found that 149 people there had been in close contact with him.

Six people in his family tested negative, however, and were now staying in a local quarantine facility. The other 143 also tested negative and had self-quarantined. The inmate works as a DJ at two bars, on Rama III Road and Khao San Road. The authorities have shut both places until further notice.

The government on Monday reported one new case of the coronavirus over the past 24 hours. A returnee from India, as total cases rose to 3,445, the Bangkok Post reported.

The Centre for Covid-19 Situation Administration said the Thai worker, aged 27, arrived last Tuesday. On the same flight as a previously confirmed case. He has been quarantined in Bangkok and the infection confirmed in his first test on Saturday. Even though he was asymptomatic.