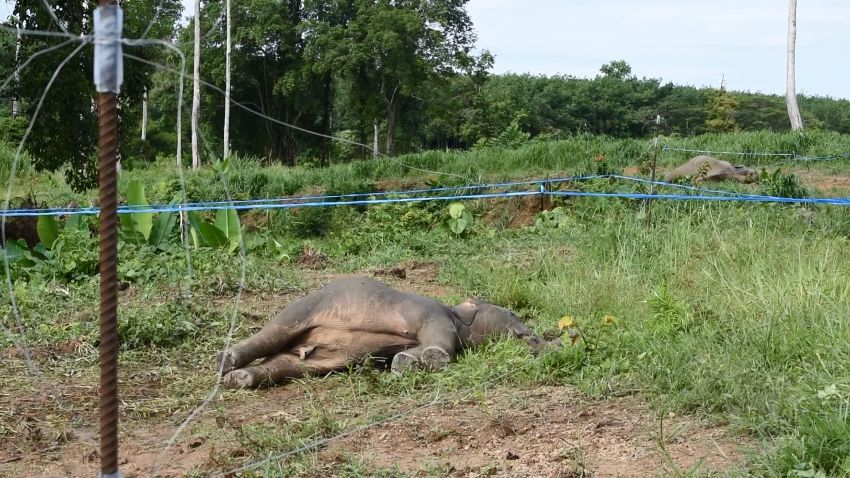 Parks and Wildlife conservation officers have reported two baby elephants were electrocuted to death in eastern province of Chanthaburi,Thailand. The owner of a fruit orchard erected and electric fence to keep foraging elephants out.

A police officer, attached to Tha Mai district police station, said he will summon the orchard owner for questioning about the fence. Police are also awaiting the autopsy results on two elephants. Veterinarians believed them both to be about two years old.

Parks and Wildlife officials said that the elephants might have become separated from the herd and ventured into the fruit orchard. One of them stepped on the electric fence and the other, which lay dead about 30 meters away, had its trunk touching the same fence, Thai media reported.

The elephant is Thailand’s national symbol

From elephants being electrocuted or killed by farmers more needs to be done to protect elephants. The Department of National Parks and Wildlife estimates there are roughly 3,340 wild elephants live in 69 wildlife sanctuaries and national parks across the country.

Thailand’s population of wild elephants has been rising. However, it’s a far cry from a century ago when at least 100,00 elephants roamed the heavily forested Kingdom. Loss of habitat and poaching helped lead to the steep decline in the elephant population.

Some poaching is still taking place despite harsh penalties and valiant efforts by forest rangers to stop it. Several forest rangers have been killed or wounded in recent years battling poachers.

With the wild elephant population on the rise, more conflicts have been developing between elephants and farmers. Even more as the elephants, searching for food, sometimes eat their crops.

The Department of National Parks said it would try additional measures to reduce those conflicts including by providing additional food sources into the elephant habitat. Also compensating farmers whose crops have been damaged by hungry elephants. Furthermore creating buffer zones between elephants and communities.