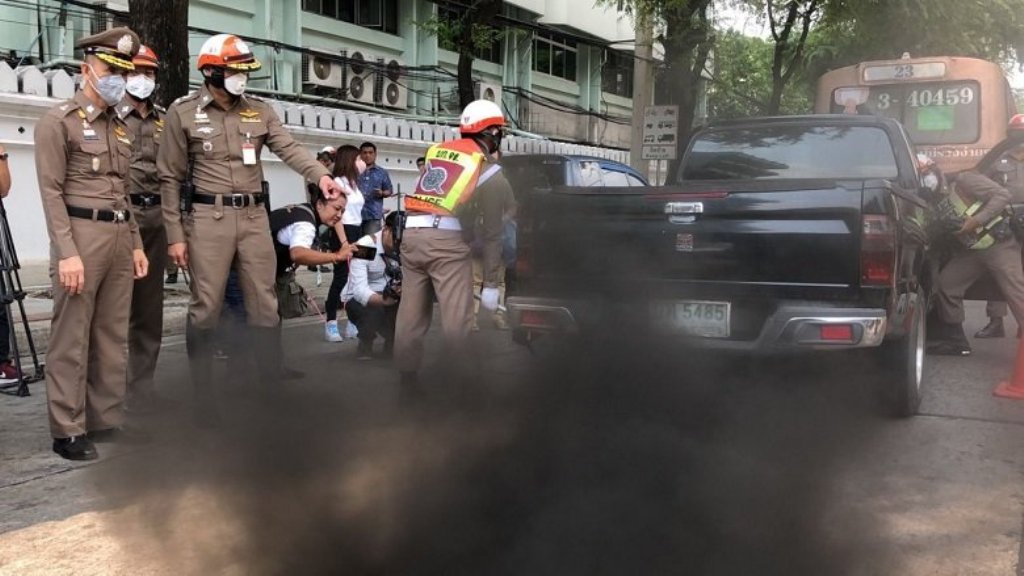 Thailand’s government is considering whether to impose a ban on personal car use in areas affected with high levels of hazardous PM2.5 dust particles. Above all if levels exceed 100 micrograms per cubic meter (µg/m³), twice the safety level.

The harsh proposal unveiled by Prime Minister Prayut Chan-o-cha after a mobile cabinet meeting in Narathiwat.

The prime minister said only public transport services will be allowed to use the roads during a ban.

“Is that what we want? Do we really have to go that far?” asked Gen Prayut.

However, the ban would only be employed on a case-by-case basis to avoid an unnecessarily negative impact.

He said the government is ready to step in with such measures when PM2.5 levels exceed the National safe limit.

If the dust levels rise to more than 100 µg/m³, his government step in Gen Prayut said.

He was responding to questions on 2 major issues; tougher measures to deal with sources of particulate matter 2.5 micrometers or less in diameter (PM2.5); and accusations that it hasn’t done enough to deal with the problem.

The PM also offered an explanation as to who is doing what in the current fight to contain the problem.

Stepping up screening for sources of PM2.5 particles

As PM2.5 levels tend to be around 50 µg/m³, considered the highest allowable level in Thailand. All concerned agencies begin stepping up screening for sources of the dust. Including vehicles emitting black smoke, he said.

In areas where the PM2.5 levels rise to between 50 and 75 µg/m³, provincial governors are responsible for targeting the key sources of the pollution, said the PM.

In areas where the PM2.5 levels rise to between 75 and 100 µg/m³ the provincial governor will have to implement more stringent measures such as prohibiting heavy trucks from entering certain inner areas of the province on at certain times, he said.

And in the event the PM2.5 levels exceed 100 µg/m³, the government will then take control and may implement even more stringent regulations, which may affect everyone, according to the PM.

He said, the government has begun working on a long-term master plan to combat pollution. It includes the development of the electric rail network; and also replacing diesel-powered public buses with electric ones.

Natural Resources and Environment Minister Varawut Silpa-archa, meanwhile, hinted that if measures against lorries emitting black smoke prove to be insufficient, personal cars could be targeted next.

“It has been found that 72% of the PM2.5 dust particles come from traffic emissions,” he said.

Among the short-term measures to be implemented next in Bangkok is a ban on heavy trucks from entering certain parts of the city every other day, possibly in February only, he said.

In another development, Bangkok governor Aswin Kwanmuang on Tuesday signed an order to shut 437 schools in Bangkok today due to a forecast of higher dust levels.

As of 6pm on Tuesday, PM2.5 ranged from 71 to 86 µg/m³ in several areas of Bangkok, while the highest level nationally was 99 µg/m³ in tambon Na Phralan in Chaloem Phrakiat district of Saraburi, according to the Pollution Control Department.