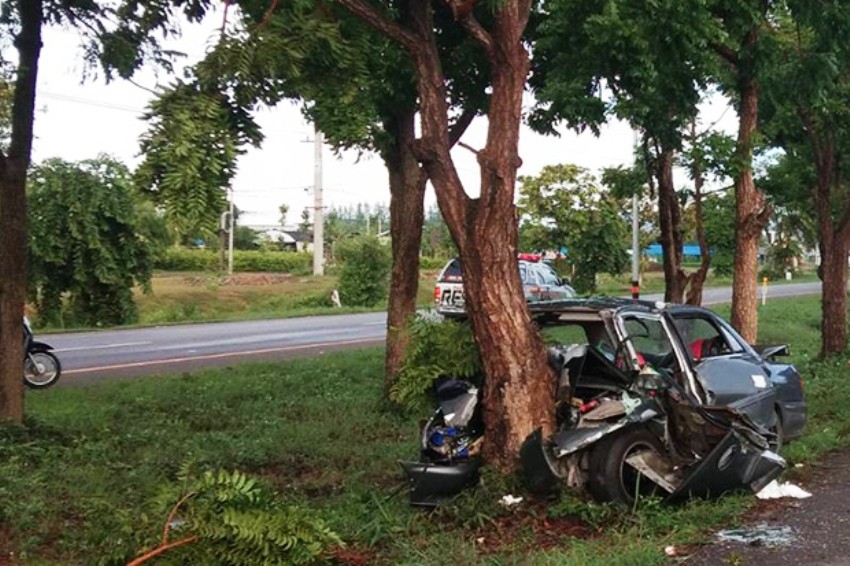 As Thailand eases lockdowns country wide from the covid-19 pandemic more people are hitting the roads, which also means accidents. On Saturday alone 6 people were killed in road accidents across Thailand.

A mother and her 3 year-old daughter were killed and father seriously injured after their car skidded off the road and crashed into a tree. The tragic accident happened in the western province of Kanchanaburi, Sunday.

Police investigators said the accident occurred at about 6.30am when a Mitsubishi Lancer skidded off the Saeng Chuto in tambon Wang Sala and rammed into a tree in the median.

Police and rescue workers arrived at the scene soon afterwards. They found a 25 year-old woman and her daughter dead in the car. Her who was the driver, was seriously injured. He was rushed to a local hospital where he remains in serious condition. An investigation also was underway to find the cause of the accident.

Meanwhile, in Southern Thailand’s Nakhon Si Thammarat province and elderly woman was killed and a man injured when their motorcycle was hit by a car.

Witnesses said the motorcycle was hit from behind by the car, which was travelling at high speed. The woman, Chamnian Taluang, 80, the motorcycle’s pillion rider, was killed instantly. Her right leg was cut off and her neck was also broken on impact. The motorcycle driver, who was not identified, was seriously injured.

The car’s driver, who was not identified, also stayed at the scene and surrendered to the police. Furthermore two people were killed after a lorry rammed into a roadside power pole in Phuket, Thailand.

The power pole fell across the road after being hit by the lorry. The driver of the lorry was killed. Another man passing by on his motorcycle was seriously injured by the falling power pole. He was admitted to Chalong Hospital where he also died.