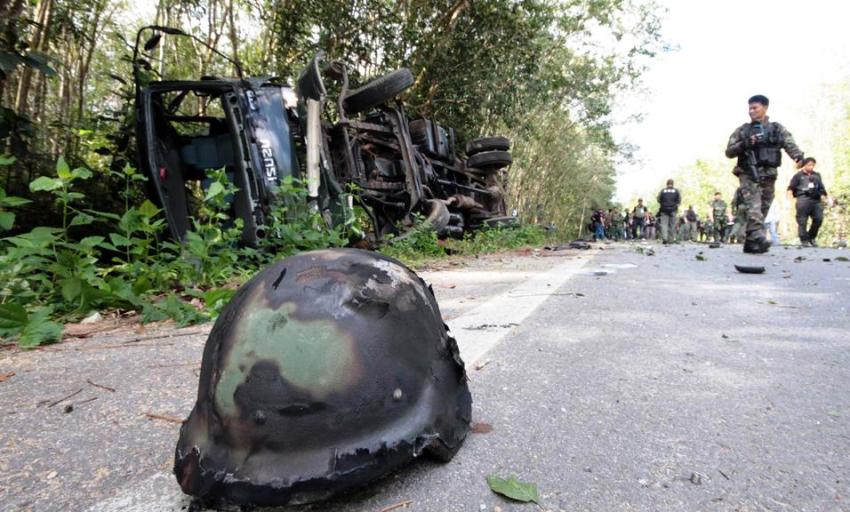 Two Army Rangers were killed and six others wounded by insurgent bomb blasts in southern Thailand’s Pattani and Narathiwat provinces on Thursday. The two bomb blasts occurred at approximately the same time.

In Narathiwat, one ranger was killed and six others wounded by a bomb blast in Rangae district.

The bomb was planted at a bridge near the office of the tambon administration. It went off around 8.20am as an army ranger team providing protection for teachers passed. the team was on its way back from Kalisa School in tambon Rangae, police said.

Meanwhile, in Southern Thailand’s Pattani, an army ranger providing protection for teachers was killed and others were wounded by a bomb explosion in Nong Chik district.

The bomb went off around 8.10am at the entrance of Pakaluesong village in tambon Tuyong, said Police said.

It was detonated as the army ranger patrol passed the spot. Volunteer ranger Emlukman Hayeesamae was killed. Other members of the team were also injured. It was not clear how many.

Violence continues to simmer in Thailand’s deep south, despite hopes a rare ceasefire called during the coronavirus pandemic would be a stepping stone to peace.

More than 7,000 people have been killed in the slow-burning insurgent conflict in Thailand’s southern provinces, where an insurgency pushing for independence or greater autonomy for the region’s Malay Muslim minority was re-ignited in 2004.

The Barisan Revolusi Nasional (BRN), the main insurgent movement controlling the majority of the conflict’s insurgents, announced a unilateral ceasefire in April, citing the “grave threat” posed by the coronavirus.

To some, the ceasefire is a tentative but rare opportunity for southern Thailand.

“For the first time in 16 years of the armed conflict in Thailand’s deep south, there is a glimpse of hope for peace,” said Sunai Phasuk, Thailand researcher for Human Rights Watch.