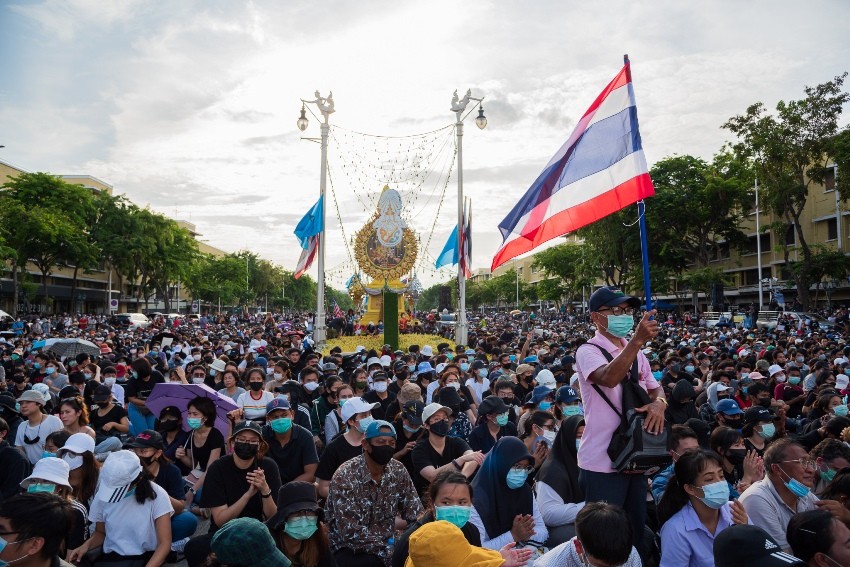 Police in Thailand have sought arrest warrants for six anti-government protest leaders on the trumped up charge of of sedition. Police are also seeing to lay charges of violating the computer crimes act; violations of the disease control law; and advertising using loudspeakers in public areas without permission.

The charges are related to the Aug 10 political gathering at Thammasat University’s Rangsit campus in Pathum Thani.

They are now wanted in relation to offences allegedly committed at the rally, namely sedition, violations of the computer crime law, violations of the disease control law and advertising using loudspeakers in public areas without permission.

Parit “Penguin” Chiwarak, a student activist, reacted on Facebook on Tuesday to news that police would seek arrest warrants for the six protest leaders.

“My six friends who organised the Thammasat Cha Mai Thon (Thammasat will no longer put up with it) will face arrest warrants for sedition (Section 116 of the Criminal Code). Oh, for heaven’s sake!” wrote Mr Parit.

He insisted rallying inside the university that day did not cause any disturbance and was peaceful.

Mr Arnon and Mr Panupong were arrested on Aug 8 for their roles in the July 18 anti-government protest at Democracy Monument. While Mr Parit was nabbed last Friday over his role in a rally in front of the Royal Thai Army headquarters on July 20.

The trio face several charges, including sedition, and were released on bail. Part of their bail condition was that they must not repeat the alleged offences.

Students have hit the streets in recent weeks, demanding the resignation of Gen Prayut’s and his cabinet. Furthermore the dissolution of parliament and the drafting of a new constitution.

At the Aug 10 rally, students expanded their demands to also include reform of Thailand’s monarchy.

The move has stirred anger in royalist groups, including the Coordination Centre for Vocational Students and People Protecting the Institution. The small but connected groups have carried out counter-rallies warning their opponents to stop offending the monarchy. Offending the monarchy in Thailand is illegal. Furthermore the Thai Government has used the draconian law to silence its critics.

The pro monarchy groups which mostly attracts older crowds, have held rallies at the same venues as the anti-government protesters. This also raised concerns of a clash between the two groups. However so far no violence has occurred.

Students in Thailand Call for Education Minister to Be Ousted