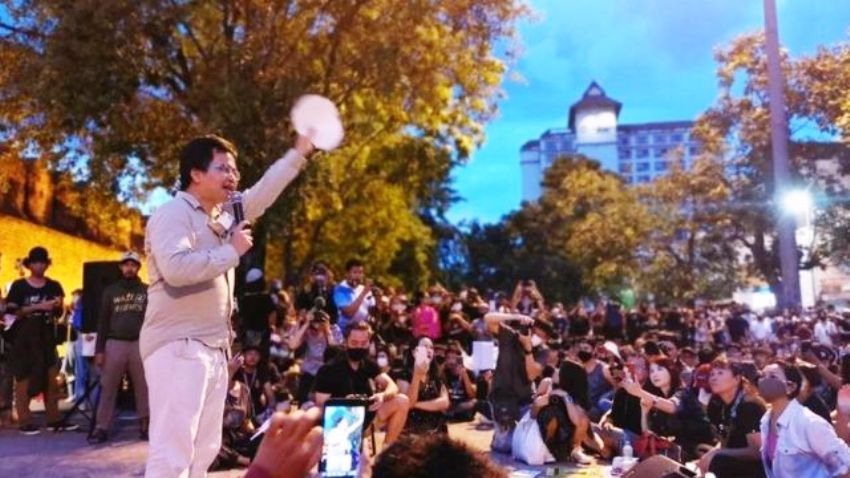 Activist lawyer Anon Numpa of the Anti-Government protests spoke in Chiang Mai yesterday, a day after being charged with Sedition by Thai police in Bangkok. Arnon Nampa took aim at the government for “threatening” the pro-democracy movement at a protest.

Thailand has seen daily demonstrations for weeks by young people denouncing the military-aligned government of Prime Minister Prayut Chan-o-cha. Who was elected in 2019 in what many say was a rigged election.

Mr Nampa and student activist Parit Cheewarak were arrested Friday. They were both charged with sedition under Section 116 of the Criminal Code and breaking coronavirus rules for taking part in a Bangkok rally last month.

Section 116 of the Criminal Code which is punishable by seven years imprisonment if found guilty.

The arrests also came four days after Mr Arnon led a discussion at a Ami-government rally on the monarchy’s role in Thailand.

He was Released on bail on condition they would not repeat the alleged offences. Mr Arnon travelled on Sunday to Chiang Mai to speak at a rally.

“We repeat our three demands: stop threatening the people, dissolve the parliament and write a new constitution,” he told a cheering crowd of roughly 400.

Analysts say the 2017 military-scripted charter tipped the scales of last year’s election in favour of former army chief Gen. Prayut and his party.

Protesters regard his administration — stacked with ex-generals and elite establishment allies. A legacy of Gen. Prayut’s royalist junta regime.

“We call for this charter to be amended because it is the inheritance of dictators,” said Mr Arnon.

His speech avoided the discussion of reforming the kingdom’s draconian royal defamation laws. Article 112 which protects the monarchy from any form of criticism.

Section 112 law aka Lese Majeste carries a sentence of up to 15 years per charge. Thus making open scrutiny of the monarchy virtually impossible. No charges have so far been filed under the Lese Majeste law against the protesters.

Another anti-government protest expected on Sunday in Phitsanulok province was cancelled. The organizer announced on Twitter, under the hashtag “#stop threatening people”.

Protesters say their nascent Anti-Government movement has been organised organically. Above all with young leaders taking to social media to promote the #flashmobs.

The coronavirus pandemic has sent Thailand’s economy spiraling into the abyss. Further sharpening the discontent of young people in Thailand against Gen.Prayut and his Military led government.