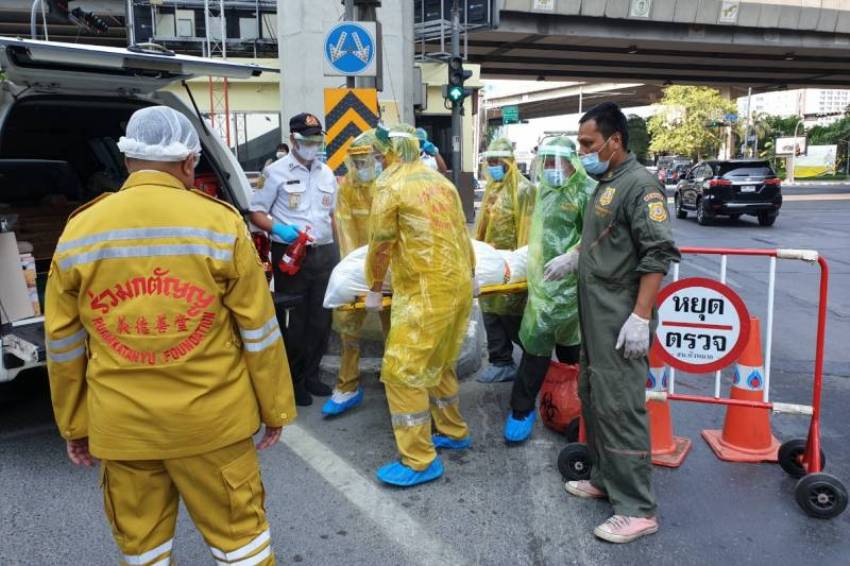 A 74 year-old British man has allegedly has jumped to his death from the Sirat Expressway in Bangkok on Saturday.

Police on Saturday (April 4) found the body the Briton at the Ramkhamhaeng intersection in Bangkok’s Hua Mak district.

Witnesses reportedly told police that they saw him jump onto Ramkhamhaeng Road from the Sirat Expressway above. Police also found his parked Isuzu D-Max pickup with a suicide not inside. According to Amarin TV his name was Brian Shelley Lindsay, 74, it was attached to the suicide note. The event happened around 7am but officials could not investigate the body until later in the afternoon. Because they were preparing protective gears in case the deceased was infected with the Covid-19 coronavirus.

From documentation in the truck, police were able to contact the deceased’s wife. She reportedly told the police that her husband was a British national and was not infected with Covid-19.  She added that her husband had prostate cancer and had become depressed lately due to losses in his business.

His body was taken to Institute of Forensic Medicine, Police General Hospital for autopsy.

British Tutor Jumps to his death in Bangkok

On March 28th, a 26 year-old Briton working in Bangkok as an English tutor apparently committed suicide on Wednesday (March 25) by jumping from a 13th-floor balcony.

Police were told the 26-year-old English tutor was despondent because his income had evaporated during the Covid-19 crisis.

A neighbouring merchant discovered the body while dumping garbage the next morning outside the building in Din Daeng district. A security guard admitted he’d heard something hit the ground the previous evening but did not investigate.

A Thai friend of the deceased said she’d known him for six months. She had invited him to help her make items that people could use as protection against the virus. It would bring them both a little income, she said.

That’s what they were doing on Wednesday evening when he asked to leave at around 8pm. She said he never complained about anything and she had no idea he might be suicidal.