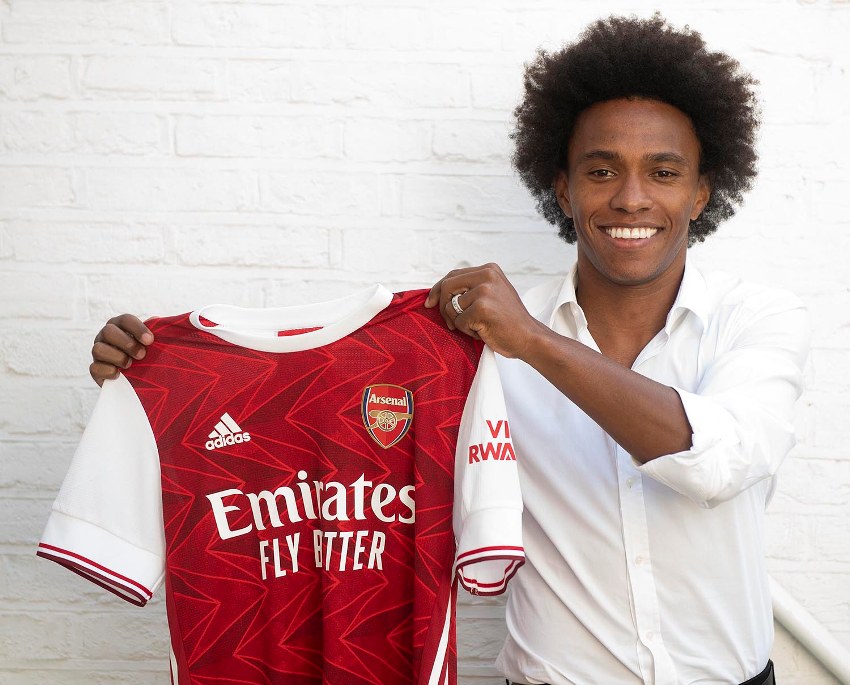 Every time the transfer window opens in the English Premier League, there are some moves that surprise you, and other moves that everybody knows about months in advance. When Jadon Sancho inevitably joins Manchester United, for example, the move won’t take anybody by surprise. The most striking move was Willian choosing to play with English Premier League Arsenal signing a three-year contract with the football club.

If Harry Kane joined Manchester City, on the other hand, that would be a shocking move that seemingly came from nowhere. Willian’s departure from Chelsea falls into the former category. Everybody knew he was planning to leave, and most people knew that he was almost certainly going to join Arsenal.

A few days ago, that badly-kept secret was outed when the 32-year-old Brazilian put pen to paper on his new contract at the Emirates Stadium, and happily posed for pictures in his brand new Arsenal shirt. After seven years playing at Stamford Bridge in the blue of Chelsea, he’s crossed London to join the Gunners.

He probably didn’t intend to rub salt into the wounds of his former fans at Chelsea with his opening statement as an Arsenal player, but his comment that he felt he was ‘joining one of the biggest clubs in the world’ will have left a sour taste in the mouths of many of them.

Arsenal is a massive club

He’s right though; historically speaking, Arsenal is a massive club with a huge global profile. In more recent years, though, they’ve been in steep decline. That begs the question of what he really left Chelsea for, and whether this is a smart career move.

Whatever Chelsea fans might claim in the weeks and months ahead, Willian didn’t leave because Chelsea didn’t want him. He might be 32, but he’s showing no signs of slowing down, and wasn’t short of suitors as his contract approached its expiry date. It was even reported in some places that Catalan giants Barcelona were interested in acquiring his services, and were prepared to offer the winger the three-year-deal that he was after.

Arsenal also placed a three-year deal on the table, with what’s believed to be a sharp increase on the salary he was paid at Chelsea. Chelsea was thought to have been on the fence about offering the player a three-year deal as opposed to a two-year one, and weren’t prepared to increase the offer they’d already put on the table in front of the star. Ultimately, that decision might have cost them. As with the ‘big club’ argument, though, that alone can’t explain why Willian decided to make the move – especially if Barcelona were knocking on his door.

Before we move on to the contract issue, though, we should remember that contract length is important to players. The longer their contract is, the more guaranteed money they have. That’s financial security in a career that’s notoriously short on it.

Without wanting to lean too hard on the metaphor, every time a player steps onto a football pitch, they’re taking a gamble just as a surely as someone playing an UK slots is. They don’t know what’s going to happen next, and they have little control over the majority of the external factors. Sometimes an online slots player will bet big and lose everything. Sometimes they’ll bet almost nothing and hit the jackpot. This is more or less the entire point of the ‘Striker Goes Wild’ online slots game.

Similarly, a footballer might break his leg badly and never play again in any game they take part in, or they might put in just the right performance in front of just the right scout to secure a big-money move. The longer the contract is, the more of a guarantee they have. When a player is in his thirties and contemplating the fact that he’s closer to the end of his career than the beginning, that’s a significant factor.

As we were alluding to before, the length of the contract might be a significant factor, but it’s not a defining factor. It’s unlikely that Willian would accept a three-year deal at a club like Everton or Newcastle, for example, despite the fact that both clubs finished mid-table in last season’s Premier League, just as Arsenal did.

Arsenal, even with their FA Cup Final triumph over Willian’s former employers, will have to make do with the Europa League. Barcelona, if we presume their interest was genuine, would also have been able to offer Willian football at Europe’s highest level. So again, why Arsenal?

If we put money and European football aside, there are only a few things left for us to consider. One is the fact that Willian already lives in London and, by all reports, loves the city and doesn’t want to disrupt his family’s life by leaving.

He could have achieved that aim by staying at Chelsea, though. Another possibility is that he was drawn in by Arsenal manager Mikel Arteta, who endured mixed fortunes during his first half-season in charge of the Gunners. Arteta is believed to be well-thought-of by the Arsenal team but doesn’t have a personal relationship with Willian.

If anything, his former manager Frank Lampard ought to have been a stronger draw in that respect. Aside from playing under Lampard this season, Willian also played alongside him during Lampard’s final season as a player in a Chelsea shirt. So it wasn’t the city, and it probably wasn’t the manager either. What else could it be?

Aubameyang to play alongside

Amazingly, the answer to that question – and the whole riddle – appears to be Brazilian legend and Arsenal technical director Edu, who has followed Willian’s career since he was a young player, and is believed to have been an influence on the winger when he was growing up.

Willian’s level of respect for Edu is apparently so significant that he was willing to pass up the chance of a three-year spell with Barcelona for the opportunity to link up with him, however loosely, at Arsenal. If there were ever a case for the post ‘Director of Football’ to be treated with more respect, perhaps it’s this.

Willian is at Arsenal not because he believes they’re bigger than Chelsea, and not because they offered him the most money, but because Edu is involved in the club’s hierarchy. It’s a surprising scenario, and one that may yet pay dividends for Arsenal on the pitch so long as they can keep hold of Aubameyang to play alongside him.