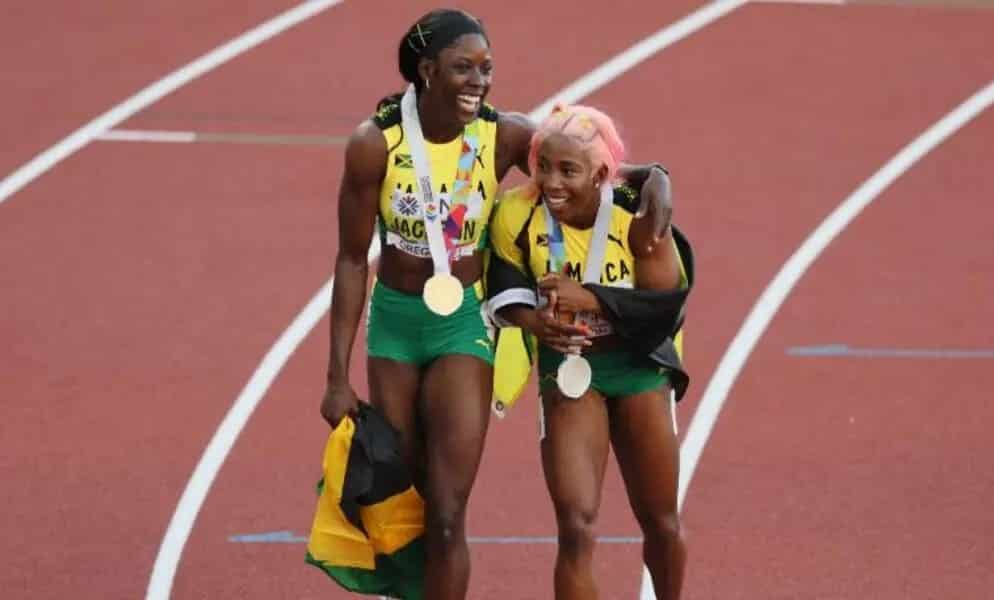 (CTN News) – Shericka Jackson, the gold medalist at the women’s 200m in Oregon, United States, is celebrating with Shelly-Ann Fraser-Pryce, the silver medalist at the event.

On Thursday night, the World Championships of sprinting saw record-breaking performances throughout each of the women’s and men’s 200m finals as both men’s and women’s records tumbled.

After beating Shelly-Ann Fraser-Pryce to win the gold medal at the national championship, Shericka Jackson set a new record at the national and championship level.
There was no doubt in my mind that the Jamaican dominated the race and won it in a time of 21.45 seconds, making her the second fastest woman in history behind only American Florence Griffith-Joyner.
The men’s race was quickly followed by Noah Lyles retaining his title and breaking the American record set by Michael Johnson 26 years ago as he broke the previous record set by Johnson.
Having crossed the finish line in 19.31 seconds, Lyles is now the third fastest man over the distance of the race.
As Lyles said after winning the race, “This is my day. I finally got to do what I’ve always wanted to do.”. He then added, “I felt that I had the best possible start I could possibly have gotten.”.
There were also two fellow Americans on the podium with him Kenny Bednarek came in second and teenager Erriyon Knighton came in third putting the US on the brink of becoming the first country to win the 100&200 metres medals at World Championships in a clean sweep.
In the end, Lyles added that it was an immaculate feeling to be on the podium with his two fellow Americans.

Jamaica did not complete a 1-2 sweep in the women’s race, but Jackson and Fraser-Pryce put Jamaica on top with a clear lead over Great Britain’s Dina Asher-Smith in third place, despite not completing the full sweep.
Despite seeing his record beaten by Lyles, Johnson, who was working as a pundit for the race, said the quality of the women’s race was the “best we have ever seen.”
World champion Shericka Jackson said he was feeling great after the performance. As the fastest woman alive, I can’t complain. She holds the national record and the championship record.”
People Also Read:
Kyler Murray and The Cardinals Extend Their Contract Through 2028
China Will Host Asian Games In 2023 After COVID Postponement
Club America VS Manchester City: Live Stream:
Related Topics:
Up Next

West Indies vs India: Live Stream The 1st ODI For You

RB Leipzig vs Liverpool: Lineups, Preview, and How to Watch