Packers Down Rams, 32-18, to Advance to NFC Title Game
Advertisement 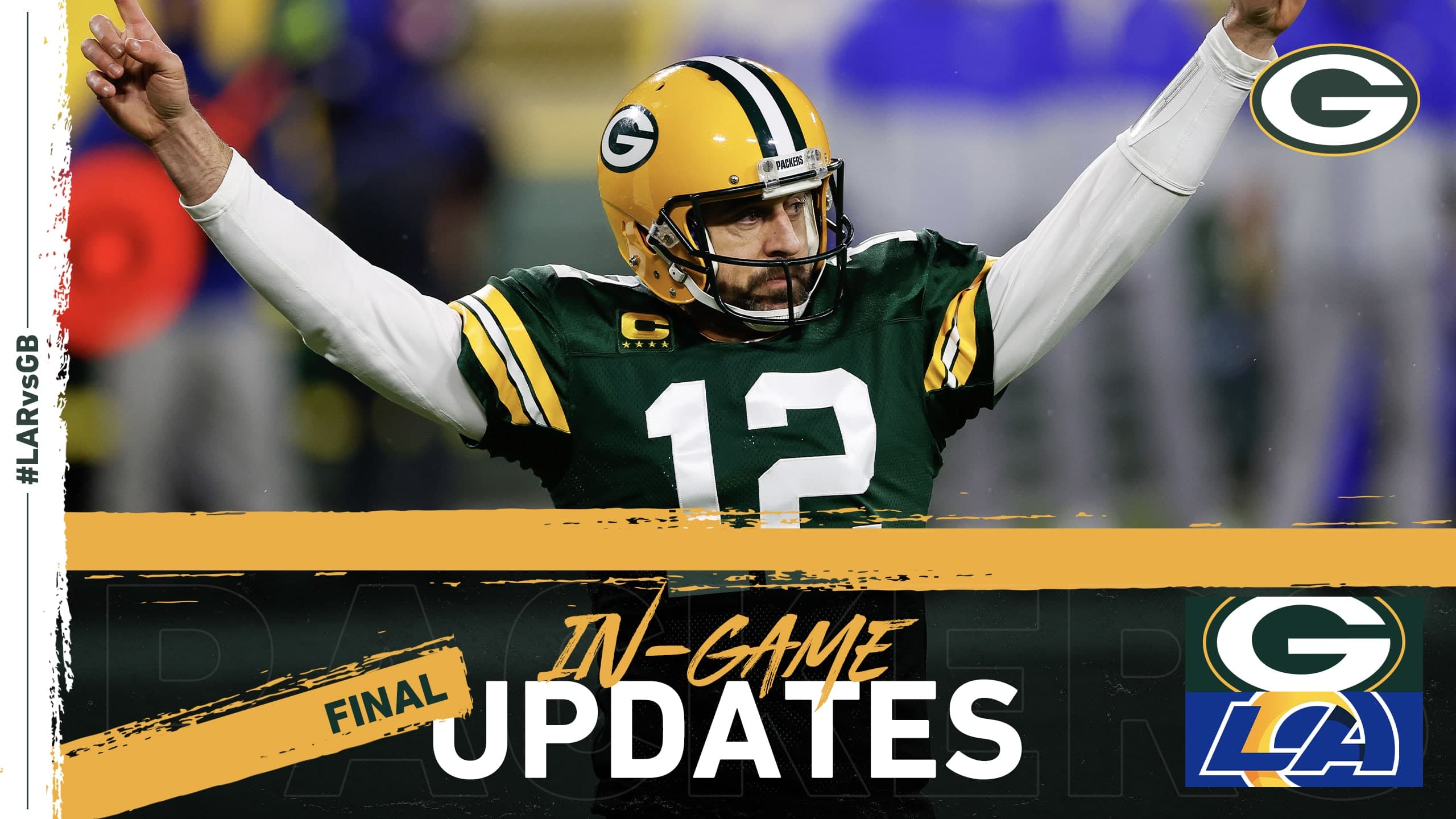 GREEN BAY – The Packers advanced to their second straight NFC Championship Game with a 32-18 victory on Saturday over the Rams in the divisional round at Lambeau Field.

The Packers led by seven in the fourth quarter when QB Aaron Rodgers found WR Allen Lazard, who had dropped a potentially big play earlier in the second half, for a 58-yard touchdown to give Green Bay a two-score lead again.

The defense then responded with two sacks on a Rams series near midfield to get the ball back and keep the Packers in command.

The Packers are back in the NFC title game and will face the winner of Sunday’s Buccaneers-Saints game. Next week’s game will be at 2:05 p.m. CT at Lambeau Field.

The Packers’ ground game was productive all game, with RB Aaron Jones getting 99 yards and a TD on 14 carries. RB Jamaal Williams added 65 yards on 12 attempts.

Here’s a recap of all the action: Packers and Rams tied at 3

The Packers won the opening coin toss and deferred. The Rams went three-and-out to start the game with Preston Smith deflecting a Jared Goff at the line of scrimmage on third-and-6.

Green Bay motioned Davante Adams cross pre-snap on second-and-8, as the Rams opted to leave All-Pro cornerback Jalen Ramsey on the defense’s left. Quarterback Aaron Rodgers hit Adams a quick out for 8 yards and the initial first down.

Green Bay also used a two-RB package of Aaron Jones and AJ Dillon on the opening possession, with Dillon picking up nine yards up the middle after Jones motioned wide.

The biggest play of the drive came when Rodgers caught the Rams trying to substitute after a 3-yard run by Dillon, finding Equanimeous St. Brown for 27 in the middle of the field on the free down.

The Packers’ drive stalled at the LA 5, as Green Bay had to settle for a 24-yard field goal by Mason Crosby to give the Packers an early 3-0 lead.

Los Angeles answered back by going hurry-up against the Packers’ base defense, with Goff completing passes down the middle to Robert Woods (19 yards) and Josh Reynolds (28) to get down to the Green Bay 23.

The Rams tried to go with a Wildcat package with Cam Akers at quarterback but linebacker Christian Kirksey sniffed it out to hold Los Angeles’ running back to a 2-yard gain on first-and-10.

The Packers’ dime defense stopped Akers on third-and-2 at the Green Bay 15. The Rams tried to go for it on fourth-and-1 but a false start penalty caused them to settle for a Matt Gay 37-yard field goal to tie the game at 3 with 4 minutes, 36 seconds left in the first quarter.

The Packers advanced back into Rams territory at the end of the first quarter thanks to three runs by Jamaal Williams for 17 yards and two passes to Robert Tonyan for 14. 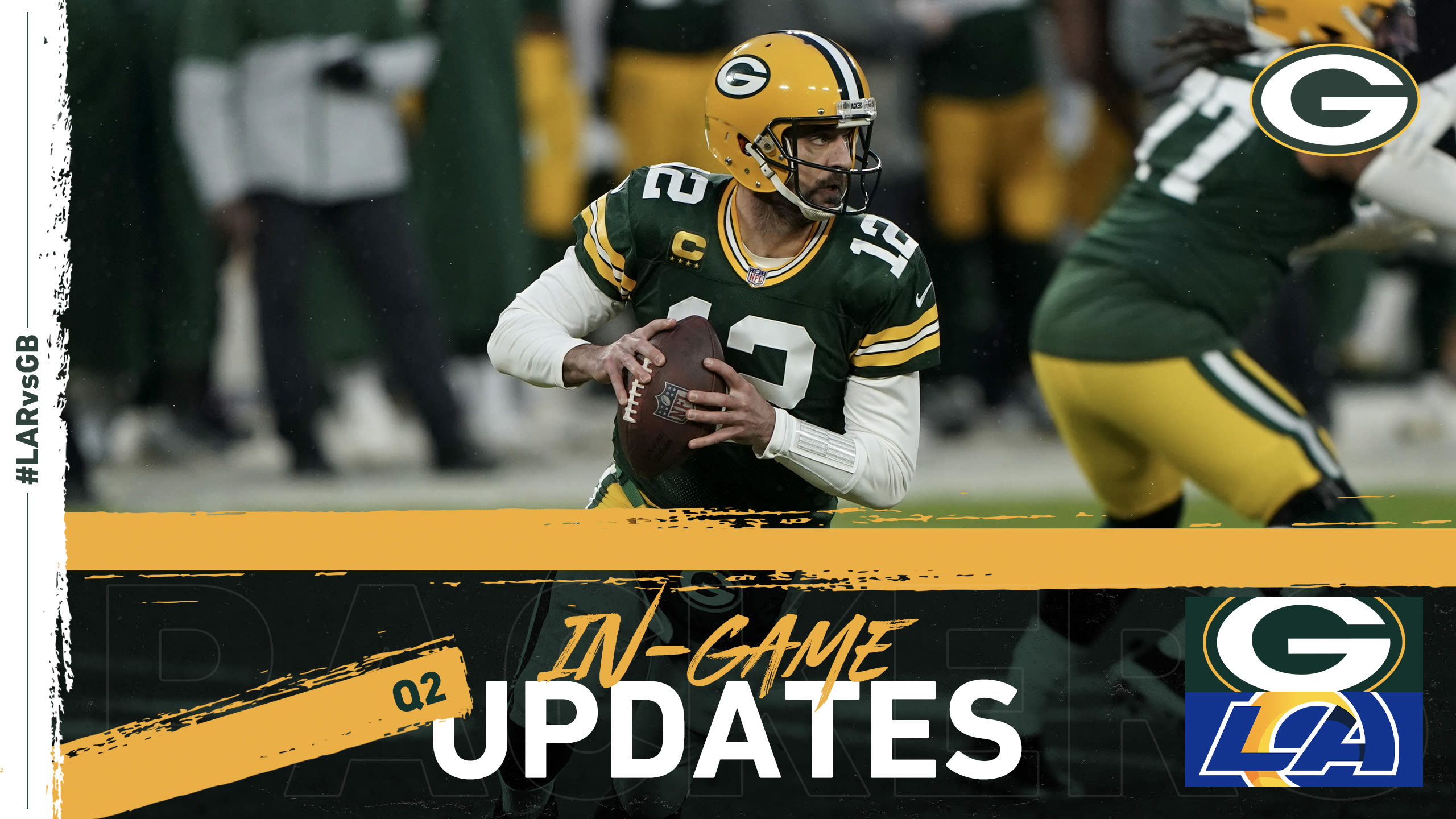 The second quarter began with Aaron Donald being flagged for unnecessary roughness after putting his hands on Elgton Jenkins’ facemask after an incomplete pass to Adams.

Instead of third-and-7 at the LA 36, the Packers used the first-and-10 situation at the 21 to set up two runs by Jones for nine yards, an 8-yard pass to Allen Lazard to set up first-and-goal and Williams plowing through for 5 yards down to the LA 1.

Facing third-and-goal, Green Bay motioned Adams across with Ramsey following him. Adams then pivoted and motioned back to the right and Rodgers hit him on a quick flare for the 1-yard TD to take a 10-3 lead.

With the catch, Adams moved into sole possession of the No. 2 spot in team playoff history with seven receiving TDs. Freeman had 10 and Jennings had six.

Rodgers moved past Peyton Manning (40) on the all-time postseason list and now ranks No. 4 in NFL history with 41.

The Packers’ defense came right back with another stand. After holding Akers to a 3-yard run on a stretch play, Za’Darius Smith came inside a Christian Kirksey blitz to sack Goff for a 7-yard loss on second down.

Kirksey then dropped Malcolm Brown on a 4-yard check down on third-and-14 to force the Rams to another three-and-out.

The Packers started their next series at the LA 47 after a special-teams penalty on the Rams. Rodgers started the drive with a check down to Jones for 14 yards after he turned upfield and made Troy Hill miss.

Green Bay moved back inside the Rams’ 20 after two throws to Valdes-Scantling for 17 yards. Jones nearly broke a big gain off the left side but Tonyan was flagged for holding.

The Packers countered back with a 12-yard slant to Adams to set up third-and-2, which Williams converted on a 5-yard dive up the middle. Two more Williams carries for six yards setup third-and-goal at the LA 2.

Rodgers scrambled in for the 2-yard TD on a read option, extending Green Bay’s lead to 16-3 after an aborted extra point in which Mason Crosby was banged up.

Mike linebacker Krys Barnes left the game momentarily with a thumb injury but returned with a club. The Rams mounted a late drive, cutting the Packers’ lead to 16-10 after a nine-play, 75-yard drive that ended with a 10-yard TD pass to Van Jefferson.

The Packers got the ball back with 29 seconds left and two timeouts. Rodgers connected with Adams for 21 and Tonyan for 33 to set up Crosby’s 39-yard field goal to give Green Bay a 19-10 lead at halftime. The Packers chipped away at the Rams’ defense in the first half, carrying it 15 times for 66 yards, before Aaron Jones broke a 60-yard run to open the third quarter. It’s the third longest run by a Packers player in playoff history.

Green Bay would keep it on the ground during the five-play, 54-yard series with Jones eventually punching it in with a 1-yard TD run up the middle to put the Packers ahead 25-10 after the failed two-point conversion.

Green Bay forced its third three-and-out of the Rams’ offense with Akers being limited to three yards on first down, Za’Darius Smith pressuring Goff into throwing the ball away on second-and-7, and Rashan Gary and Kenny Clark combining on a sack for a 9-yard loss.

The Packers were facing second-and-17 from their own 7 when Rodgers stood tall in the pocket and connected with Lazard for 21 yards and the first down.

Lazard had another chance for a big play on first down after a 11-yard Williams run, but he couldn’t bring it in and Green Bay would have to punt for the first time.

The Rams came out slinging the ball, completing six straight passes to move into scoring range. The Packers did a good job of stifling LA’s Wildcat formation with Akers on its first two tries but the rookie running back finally found paydirt on a 7-yard run up the middle.

The Rams cut the Packers’ lead to one score after hook-and-lateral pass to Akers, bringing the score to 25-18 with 1:41 remaining in the third quarter.

The third quarter ended with Rodgers connecting with Adams on a 8-yard pass off a slant to the Green Bay 47. The Packers’ drive stalled two minutes into the fourth quarter, with KeiVarae Russell downing JK Scott‘s punt at the LA 6.

A series of short throws moved the ball out to the Rams’ 32 before an incompletion and a Clark sack for a 6-yard loss made it third-and-16. Goff had to settle for a 5-yard completion, leading to a Johnny Hekker punt.

On second-and-6, Rodgers dialed up a 58-yard touchdown pass to Lazard deep down the seam to push their lead to 32-18 with 7 minutes remaining.

The Packers’ defense took it from there, with Jaire Alexander tackling Woods for a 3-yard loss on a second-and-10 screen and Preston Smith deflecting his second pass of the day on third down.

The Rams went for it on fourth-and-13 but Clark and Gary combined for another sack of Goff for the turnover on downs at the LA 49.

Rodgers hit Tonyan on a playaction rollout for a first down to start draining the clock. Back-to-back carries of six yards for Williams resulted in a second first down, drawing a fist pump out of Rodgers with 2:35 remaining. One more WIlliams first down brought the game to the two-minute warning, allowing Rodgers to kneel out the win.

To Read more Sports News , Go to This Link https://www.chiangraitimes.com/sports/