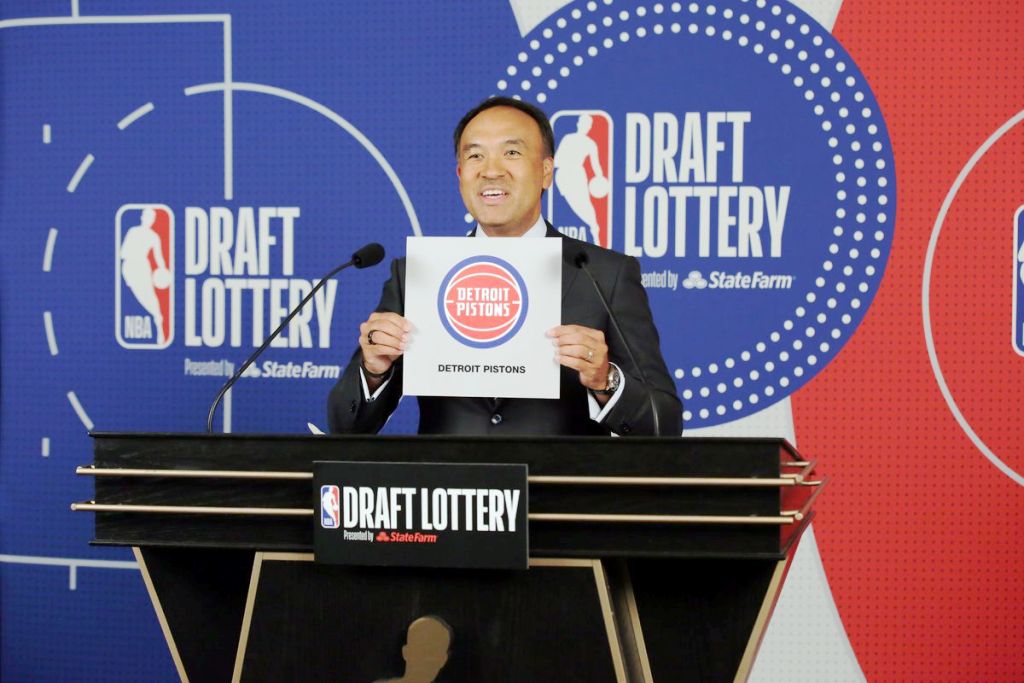 The Detroit Pistons have claimed the top spot in a loaded 2021 NBA draft Lottery, followed by the Houston Rockets, Cleveland Cavaliers and Toronto Raptors.

Detroit, after taking three players in the first round of last year’s draft — Killian Hayes (seventh), Isaiah Stewart (16th) and Saddiq Bey (19th) — will now get a chance to add a high-end talent to its mix. It will be the Pistons’ first top-five selection since they took Darko Milicic second overall in 2003, and their third in the past 40 years. They also took Grant Hill third overall in 1994.

Detroit Pistons have the top overall pick for the first time since drafting Hall of Fame center Bob Lanier out of St. Bonaventure University in 1970.

“Obviously we get to add another wing player to the restoration process,” said Pistons general manager Troy Weaver, who was hired to run Detroit’s basketball operations last year. “We’re excited to be in this position. But it means that we’ve got a lot of work to do and we’re going to be diligent about it. But it always helps to be able to add the number one pick.”

Oklahoma State guard Cade Cunningham is projected by many to the be No. 1 overall pick. Sources told ESPN’s Adrian Wojnarowski on Tuesday night that the plan for Cunningham will be to visit only one team before the draft: the Detroit Pistons.

The Rockets, after making the playoffs the past eight seasons, saw things go in an entirely different direction this season after trading James Harden to the Brooklyn Nets for a bevy of draft picks back in January. But after finishing with the NBA’s worst record, Houston got a bit of luck Tuesday, allowing it a chance to immediately begin to restock its coffers around center Christian Wood with an elite young talent.

Cleveland, after picking fifth the past two seasons, got a dose of lottery luck this time around, as the Cavaliers hope to break back into the playoff mix in the Eastern Conference next season around whomever they pick, young guards Collin Sexton and Darius Garland, forward Isaac Okoro and center Jarrett Allen.

It was a miserable season for the Raptors, who saw what easily was the most successful stretch in franchise history — seven straight playoff appearances, including the 2019 NBA title — come to a screeching halt this season. Playing in Tampa, Florida, because of the ongoing COVID-19 pandemic, the Raptors endured a stretch of close losses to begin the season, then a massive bout of COVID cases among players and coaches just as the team got itself back to .500 midway through, sinking its chances at a return to the postseason.

Tuesday night, however, the Raptors got some reward for that ugly season, as they leaped into the top four for a chance to add a premium young player to a team that is ready to win right now around its core of guard Fred VanVleet and forwards Pascal Siakam and OG Anunoby.

The Magic shifted into a rebuilding mode this year, trading Nikola Vucevic to Chicago, Evan Fournier to Boston and Aaron Gordon to Denver. Now, the Magic will get two cracks at adding young talent to its core thanks to its own pick, the fifth overall selection, and that of the Bulls, which it got as a result of the Vucevic trade when it didn’t jump into the top four selections.

No team had more to gain in this draft than Oklahoma City. The Thunder were the only team that had a chance to land two top-five selections if they received Houston’s pick, which would have happened if the Rockets didn’t move up in the draft.

Ultimately, though, Houston got lucky, leaving the Thunder with its own pick — sixth overall — in addition to Boston’s 16th overall selection, which they picked up in last week’s trade that sent Al Horford back to the Celtics for Kemba Walker, and Miami’s 18th overall selection, as they continue to rebuild around emerging star guard Shai Gilgeous-Alexander.

The Timberwolves knew they would be giving up their pick either this year, if they stayed outside the top-three picks, or an unprotected pick next season if it did not.

Ultimately, it was Houston, Orlando and Golden State that managed to have things break their way Tuesday night. As a result, six teams — Oklahoma City (3), Houston (3), Golden State (2), Orlando (2) and New York (2) — have control over 12 of the 30 first round picks in this year’s draft.