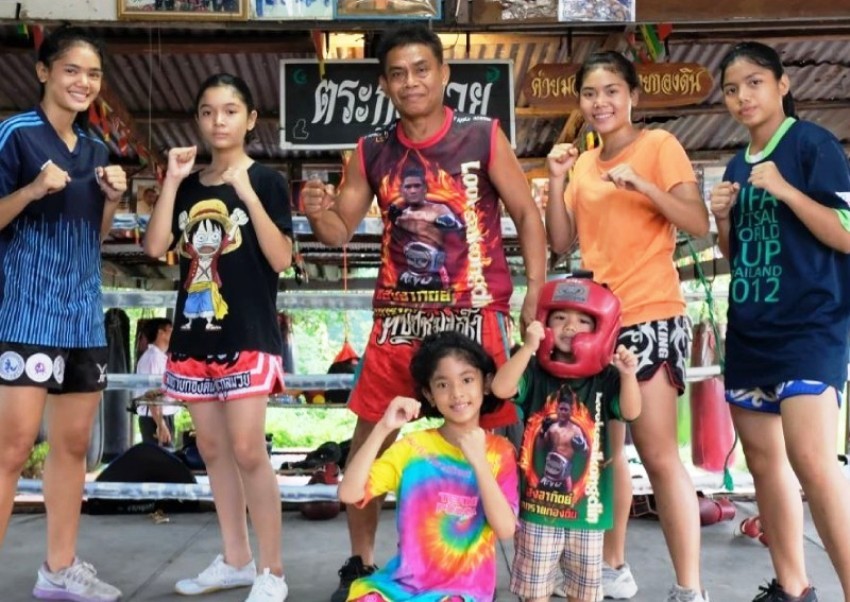 Six days a week, many of the 16 children of Nopparit Yoohanngoh, a Muay Thai boxing trainer, are up and about before sunrise in Bangkok city.  Yawning and bleary-eyed, his children head to their father’s gym, which consists of a weathered boxing ring and an adjacent training space under a corrugated iron roof. He built the gym by himself among shady willows beside a scenic canal.

The teenagers do runs on footpaths along the waterway, lift rusty weights, do push-ups on plastic mats and pummel punching bags hung from beams. Even Nopparit’s youngest child, nine-year-old Mussalin, is at it.

Nopparit Yoohanngoh, has trained all of his 16 children in Muay Thai An elfin girl with curly black locks, she kicks boxing pads held by an older brother – before sneaking off for some ice cream at a local shack that doubles as a convenience store. After school, his children return to their father’s gym and resume training.

For three decades Nopparit, 54, has coached his children – the eldest is 32 – in Thai boxing, or Muay Thai, starting when they were in diapers. His younger ones all compete in the sport and several of his grandchildren are training too.Soft-spoken and a doting father, Nopparit has steered his children towards Thai boxing to keep them away from drug abuse in their low-income neighbourhood. “It was already a big problem in my youth,” he says. “My friends who became junkies are all dead.”

Nopparit has trained his nine daughters as hard as his seven sons, and produced some of Thailand’s best female fighters.

“Boys are stronger and more athletic, but girls can make up for less strength by mastering the techniques,” he explains, during outdoor practice with five of his daughters in muggy tropical heat as dark monsoon clouds loom overhead.

His daughters have all won championships in their age and weight categories. Even more there are numerous trophies, medals and photographs around his modest town house that attest to their success. “I’m not proud of their belts. I’m proud of their resolve and character,” Nopparit says. “I don’t care if they win or lose. I just want them to do their best.”

His daughter Kullanat, a lithe 18-year-old with her long hair pulled into a topknot, begins sparring with Phoobadin, her 16-year-old brother, who has boyish features, well-toned muscles and throws explosive power punches.It’s a spirited give-and-take as the siblings practise kicking and clinching while their mother, Somsamorn, encourages them.

“When we were little and we sparred, my sisters easily beat me so I cried,” Phoobadin recalls. That is no longer the case. “Now he’s much stronger than us,” Kullanat says.

Dubbed “Thailand’s miracle child” by the US-based Boxing Scene magazine, Phoobadin, whose ring name is Sangarthit Looksaikongdin (after the name of his father’s gym), recently defeated a fighter five years his senior at a high-profile bout in Bangkok to claim the World Boxing Association Asia’s light-welterweight title. Since turning pro at 14, he’s won other coveted belts, in boxing and Muay Thai.

For winning a prize fight recently, he pocketed 300,000 baht (S$13,000), a windfall by local standards, especially for a high-schooler.His older sisters can only dream of earnings like that despite being accomplished Muay Thai fighters in their own right. Female fighters are taken less seriously by local promoters and fans of Thailand’s beloved national sport, the young women say.

“The men are stronger and more dynamic so I understand why people prefer to watch them,” says Phawita Yoohanngoh, 19, who has had 118 fights since her first at age six. She has won most of them, but gets 10,000 baht at best for a bout. “Even I think it’s more fun to watch men fight,” she adds. “But some women have great technique, which is also fun to watch.”

At local competitions, female fighters are routinely relegated to sideshows – if they’re invited to compete at all.

And while men duke it out through five three-minute rounds with one-minute breaks, women often fight for three rounds lasting two minutes each with two-minute breaks. That leaves less time to show off their skills.

Women fighters also suffer from being matched up by event organisers without regard for their skills and experience, which leads to mismatched contests. “A lot of promoters don’t bother much with female fights. They look at two girls and go ‘Same weight? Go fight!’” says Jade Marrisa Sirisompan, a one-time world champion who has retired from competition and advocates for greater recognition of female fighters in Thailand.

“You don’t want to watch someone kick someone else’s ass,” she says. “When a fighter is outclassed by another, it isn’t a challenge or fun for either of them.”Under the right conditions, female fighters can put on a great show. Kanyarat Yoohanngoh, a petite 21-year-old university student, did just that last December against Paloma Arranz, a 29-year-old nurse from Spain, during a televised bout in Bangkok. The most accomplished Yoohanngoh girl in the ring, Kanyarat competes as Duongdaonoi Looksaikongdin in the ring and recently held a world championship title in the 48kg class.

As her parents and sisters cheered her at ringside, Kanyarat withstood a flurry of kicks and punches from Arranz when suddenly she spun around to elbow the Spaniard in the forehead, leaving her with a bleeding gash.Undaunted, Arranz kept on pressing with more punches and kicks.

Dodging and weaving, Kanyarat knocked her opponent down in the second round with a clinical elbow to the face. In the third round, Kanyarat stunned Arranz with another lightning-quick elbow strike.

The Spaniard, her face blooded for the second time, retaliated with well-aimed strikes of her own.

The judges called it a draw, which still irks Nopparit, who saw his daughter as the clear winner. Few men could have shown more heart than these two women, he says. Yet in Thailand’s most prestigious venues of Muay Thai, the Lumpini and Rajadamnern stadiums in Bangkok, no woman is allowed to touch the rings, let alone compete in them.

“The rings at these places are seen as sacred areas,” explains Chinawut Sirisompan, a grandmaster of the sport. “Every so often they’re sanctified with mantras and blessings by monks. A woman’s touch is believed to undermine their magical power.”Some years ago a Japanese female journalist, unfamiliar with the taboo, put a foot on a step of the ring in one of the stadiums.

“That night it was a bloodbath,” Chinawut says. “All the fighters got badly cut. They blamed the woman.”

The same taboo about contact with women pertains to the traditional magical tattoos with which many male fighters get themselves inked for protection against injuries.

Newly tattooed fighters stay away from menstruating women lest the skin-deep magic of their tattoos should vanish.

Even at less prestigious venues female fighters have to go low – literally. Men enter and leave Thai boxing rings by climbing over the topmost of four ropes, but women crawl under the bottom one.

“Men go over, women go under. Even in my gym,” notes Jade, the daughter of Chinawut, who owns and runs a Thai boxing camp in eastern Bangkok. The grandmaster is president of both the World Muay Thai Organisation and the Kru Muay Thai Association. And in his office is a large shrine with sacred garuda statues and antique swords.

The weapons are testament to Muay Thai’s origins as a martial art. Developed for hand-to-hand combat on medieval battlefields. Furthermore which were off-limits to women.

Among the framed mementos on his wall is a newspaper clipping about a young female fighter from 1997 at Thailand’s first official Muay Thai bout for women.

A reformer who wants a larger role for females in his sport. Chinawut staged the event in Bangkok between a foreigner and a free-spirited Thai woman he had been training. “I got a lot of flak for that,” he recalls. Undeterred, he carried on staging fights for women at his organisations’ tournaments. By now such fights have become routine at locally held international competitions.

However, when his daughter, now 28, announced her decision at age 18 to become a fighter, he brushed her off. “I laughed when she told me,” recalls Chinawut. “You don’t want your daughter to get punched in the face and Muay Thai is rarely a good career. Especially for women.”

Jade persisted, proving her mettle in the ring. “She had the guts to do it,” her father concedes. “Given a chance, women can be great fighters.”