How To Beat The System And Win At Online Crypto Gambling

5 Ways Virtual Reality Has Made an Impact in Gaming Technology

There will be a lot of star power in Super Bowl LVI, not only on the field, with Joe Burrow taking on Matthew Stafford; but onstage, with Dr. Dre and Snoop Dogg headlining a jam-packed halftime show. On the SoFi Stadium turf, Dwayne Johnson is scheduled to make an appearance ahead of a kickoff during the pregame festivities.

Dwayne Johnson tweeted this week, “after all these years, my football dream has finally come true. This will be historic. This will be my honor. This will be exciting. I’ll see you on Sunday!” 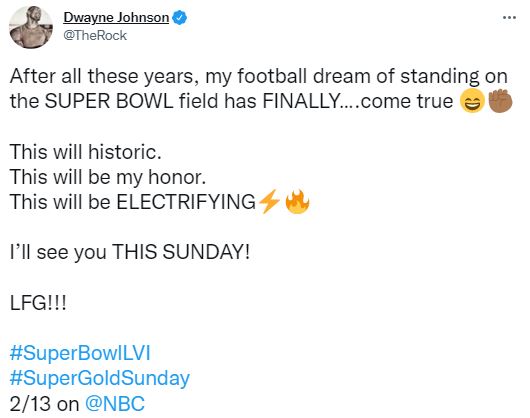 The actor, businessman, and former WWE star will narrate NBC’s pre-game show and tease “Super Gold Sunday” — with both the Super Bowl and Winter Olympics broadcast on the same day — before delivering a “pre-kickoff speech” ahead of the Bengals-Rams game.

Dwayne Johnson, a former football player for the University of Miami before becoming a pro wrestler, previously made an appearance at Super Bowl LIV in Miami, when he introduced Chiefs and 49ers players.  Dwayne  Johnson “The Rock” has had a growing relationship with pro football of late: he produced and starred in HBO’s Ballers series, he appeared on Peyton and Eli Manning’s “Monday Night Football” broadcast, and he has become a co-owner of a revived XFL league that is scheduled to return in 2023.

The Rock is ready for #SBLVI! (via @TheRock)