Earthquake in Indonesia felt All Over Southern Thailand 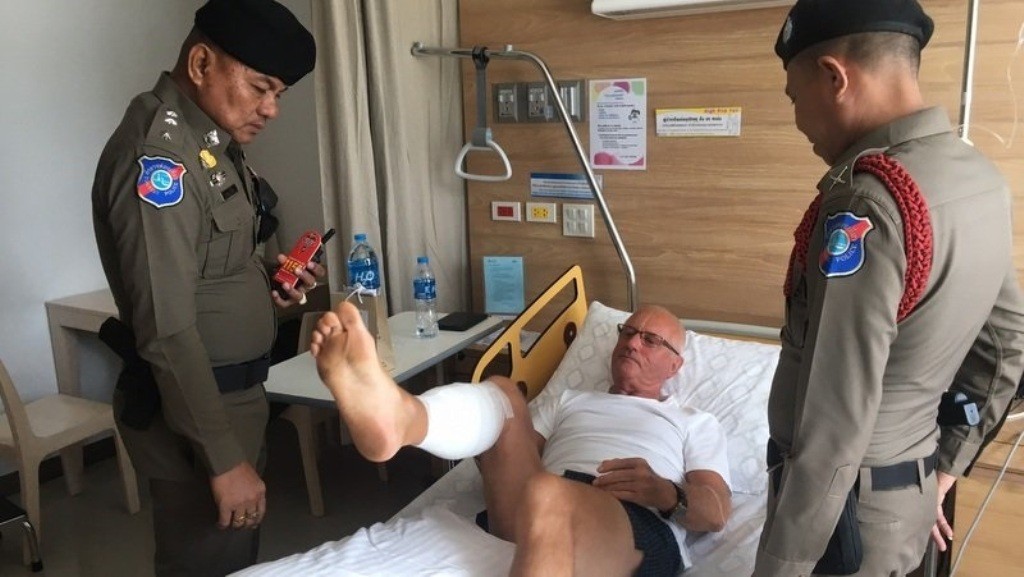 A German tourist has been severely injured in a possible shark attack while swimming at a beach in southern Thailand beach. 75 year-old Hans-Peter Malten, was swimming at Nang Thong Beach in the Phang Nga when his leg was bitten.

Mr. Malten said that he and his wife went for a morning walk along the beach on Sunday morning. At about 7:15 a.m., he went for a swim while his wife stayed on the beach, the Phuket news reported.

While swimming about seven meters from the beach, he felt a big fish swimming nearby and then he was bitten.

Malten was taken to a Medical Center before being transported to Bangkok Hospital in Phuket where he was treated.

The bite left him with a severed tendon damage and a gaping 7.9-inch semicircular gash on his leg. Malten has since been discharged from the hospital, where doctors were reportedly stitched up his wounds.

Authorities have yet to identify type of fish or shark that bit the 75 year-old German.

Local marine expert Dr. Thon Thamrongnawasawat of Kasetsart University believes it could have been the act of a bull shark or a black-tip reef shark.

However a black-tip reef shark would leave a smaller bite mark than the latest injury, Dr. Thon said.

According to the International Shark Attack File at the Florida Museum of Natural History, there have been four confirmed unprovoked shark attacks in Thailand.

The latest injury could have been the result of a shark mistaking a human for other prey. Above all due to reduced visibility in murky waters, he explained.

Two of the most recent shark attacks reported in Thailand include one off the coast of Koh Tao in Surat Thani in 2018. And another in Phuket in 2017, both of which reportedly did not cause any severe injuries, he said.

While shark attacks are “very unlikely,” he advised against swimming at dawn or dusk when smaller sharks tend to look for food near the beach.

In 2015, an Australian tourist in Phuket was bitten on the foot while swimming at Karon Beach in the early morning hours.  Jane Neame, 37, was rescued by Karon Beach lifeguards who spotted her calling for help in the water.

She was treated at Bangkok Hospital Phuket however authorities never identify what could have caused the bite injuries.

“It is very rare for [a] tourist to be bitten like this, and I have not been able to confirm precisely which kind of fish bit [Neame’s] foot,” shark expert Tessapon Krajangdara, a specialist at the Phuket Coastal Fisheries Research and Development Centre, said at the time.

“It is possible that a small hammerhead shark bit her, as they feed in the early morning. But that would be very unusual, as a shark would normally bite a person on the leg [not the foot],” he said.

Also, the water where she was swimming is quite deep, but Phuket’s beaches are not known for attracting sharks.