Home Opinion Expats in Thailand Weigh in on Anti-Government Protests 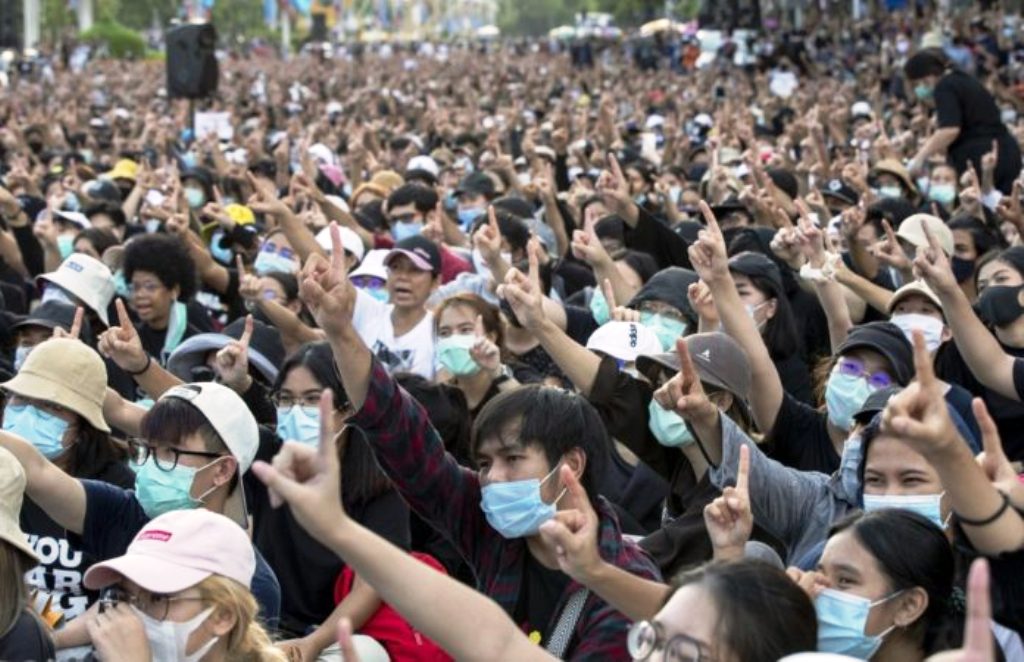 Anti-government demonstrators in Thailand led by the Free People group are demanding the government dissolve parliament. While people rallied against the government many expats were watching and weighed in their thoughts.

The Free People group gather at the Democracy Monument on Ratchadamnoen Avenue on Aug 16th, to protests against Thailand’s pro-military government.

In front of Democracy Monument under police guard was a grey-haired foreigner in a blue T-shirt and shorts. He wore sandals and carried a backpack. He looks like a tourist, but he said he is “observing” the pro-democracy protest which has become the largest anti-government rally since the military coup six years ago.

Student-led protests have spread nationwide since July 18. On Aug 16, over 10,000 protesters braved the searing heat to join the demonstration led by the Free People group to demand the dissolution of parliament, seek changes to the military-backed constitution, and end government harassment of dissenters, without recourse to military coups or a national unity government.

Various youth-led groups took the stage to air their grievances ranging from education and gender inequality to labour and community rights in front of a cheering crowd.

Angels and Demons at the Rally

On the sidelines, the “Unofficial Drama” group organised a street performance where a male angel was trying to drag two female slaves and persuade them to follow him. However, they were awakened by two female students who dared to question his behaviour before they joined forces to turn him upside down.

A member of the group said while some Thais argue society is not ready to address the issue of the monarchy, that does not mean there is no truth to what the students are saying.

Protesters flashed three-fingered salutes and chanted in defiance of dictatorship. They put up colourful umbrellas — a staple symbol of resistance in Hong Kong — and held banners drawing inspiration from pop culture, including The Hunger Games and Parasite.

An American expat, who identified himself as “Randy”, told the Bangkok Post their three demands are “simple” and “reasonable”.

“We also have problems about democracy at home,” he said. When asked about calls for reform of the monarchy, the man in his 50s declined to comment because “it is difficult for a foreigner to understand the idea that you can’t discuss certain subjects”.

Earlier, human rights lawyer Arnon Nampa broke the taboo to discuss the monarchy at the Harry Potter-themed protest at Democracy Monument on Aug 3. Later Panusaya Sithijirawattanakul, representative of the Student Union of Thailand, read out their 10-item manifesto during the rally at Thammasat University’s Rangsit campus on Aug 10.

A German expat in his 30s who now lives in the Phra Khanong area said he joined the rally because although he is a foreigner, he has lived here for 12 years and feels like a Thai citizen. “I feel compelled to stand up for what is right and that is the main reason I am here,” the man, who asked not to be named, said.

He said he was surprised to see so many people turn out, especially young students who are often expected to fall into line. “It is good to see they care about authoritarianism,” he added.

When asked about his view of their demands, he said some are “minefields”, but he agreed with those who maintain that they want to protect the monarchy by “making it more constitutional”.

It is just a different opinion

Meanwhile, another Expat, who also asked not to be named, said he does not get involved in politics because he doesn’t trust those who came into power, but he joined the rally because it was close to his apartment.

When asked how it differs from the situation in his own country, he said things were more peaceful there and hoped they will remain so.

“I think this one — whether it be pro-democracy or pro-monarchy — is not right or wrong. It is just a different opinion. If you start to look at life like this, you will not have hatred or antagonism towards the other side,” the man, in his 60s, said.

The same day, about 60 demonstrators had joined a pro-monarchy rally led by vocational students at Democracy Monument.

Stability and prosperity to the kingdom

Chris Baker, a British historian and writer, joined the forum on the theme of “Student-led protests and Thailand politics: Where is it all heading?” at the Foreign Correspondents’ Club of Thailand (FCCT) on Thursday night. While other speakers addressed the student protests, he provided historical background for their discussion.

The historian, who has been based in Thailand for more than 30 years, explained the cosmology of the monarchy and the role of the king in bringing stability and prosperity to the kingdom.

He went into detail about the negotiations between the high institution and pioneers of democracy over their coexistence, saying the space of the monarchy contracted from 1910-1970, but has grown since then amid debates behind the scenes in the form of underground literature and the internet.

Of Mr Arnon’s call for public debate over “He who must not be named”, he said: “You could almost hear the thunder crashing in the background. The plate of glass breaking. This was a hugely historical moment.”

Tips For Turning Your Patio Porch Or Deck Into an Outdoor...