A wildlife trader was apprehended while delivering four tiger cubs he was selling for $45,000 to an undercover agent in Northeastern Thailand’s Mukdahan province.

Wildlife protection officials investigating the illegal wildlife trade in the Northeast apprehended him.

They discovered that a man, later identified as Mr. Thanad Wongsarn, 63, had four tiger cubs smuggled from Laos and was willing to sell them for 2 million baht, said Pol Lt Gen Jirabhop Bhuridej, commissioner of the Central Investigation Bureau, on Tuesday.

He was contacted by an undercover wildlife officer posing as a potential buyer. Following negotiations, the trader agreed to reduce the price from US$55,000 to US$ 45,000.

The four tiger cubs were to be delivered at a petrol station in Mukdahan city center.

When he arrived at the rendezvous around 3 a.m. in a pickup, police moved in to arrest him. Two male tiger cubs and two female tiger cubs, each about two months old, were in two baskets inside the pickup.

During questioning, Mr. Thanad allegedly stated that he purchased the wild cubs from a person in Laos and smuggled them into Thailand. He was taken to the central police station for further investigation. 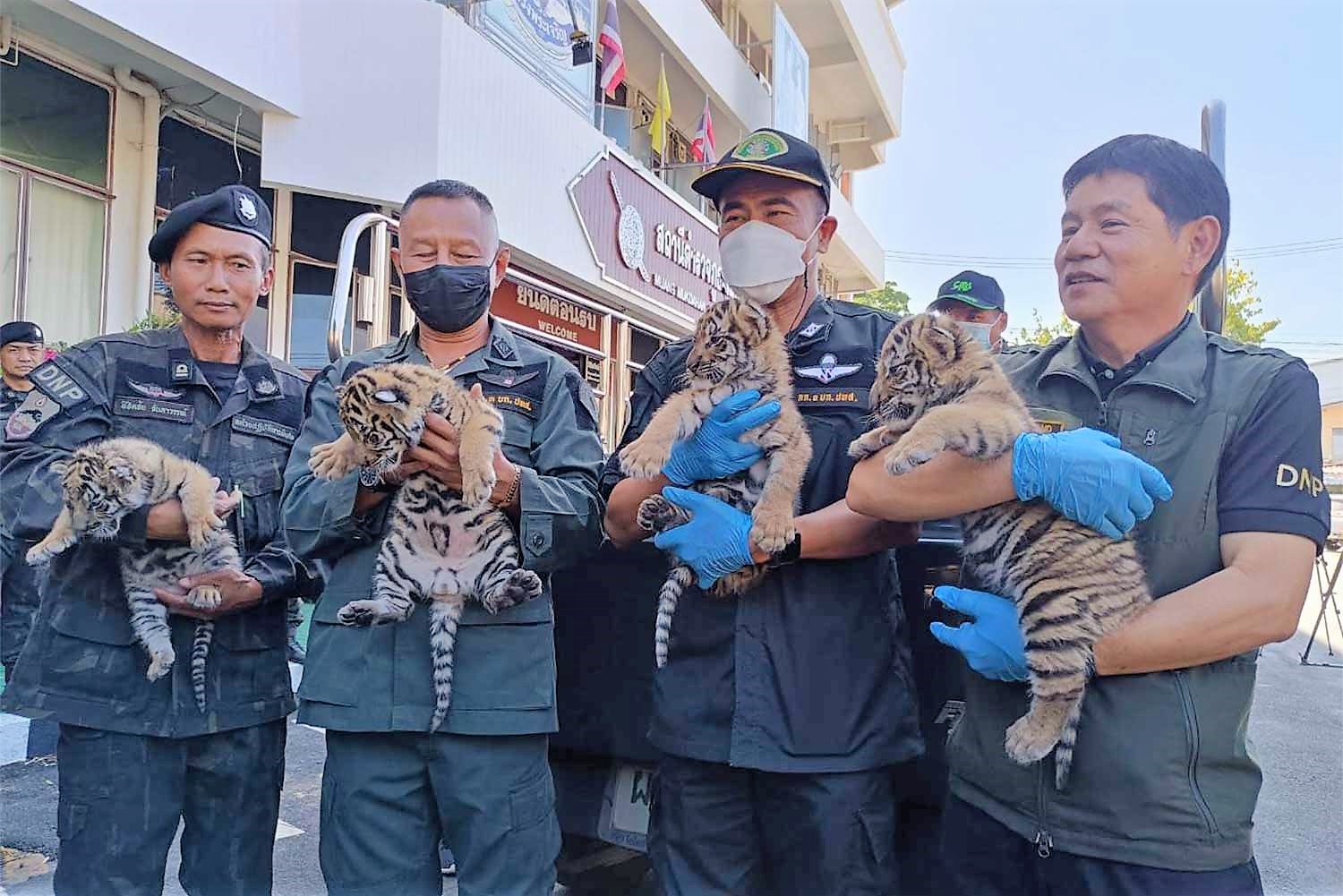 The tiger cubs were taken to Si Sa Ket’s Chulabhorn wildlife breeding station to be properly cared for.

In April, three illegal wildlife traders were apprehended while delivering a tiger cub they sold for $11,200 each to an undercover agent in Nonthaburi province.

The three men, identified only as Pheeraphol, 23, Phornthiwa, 30, and Chatree, 41, were wanted on April 5 on charges of illegal possession of protected wild animals and illegal wildlife trading, according to to arrest warrants issued by the Criminal Court. The police withheld their surnames. 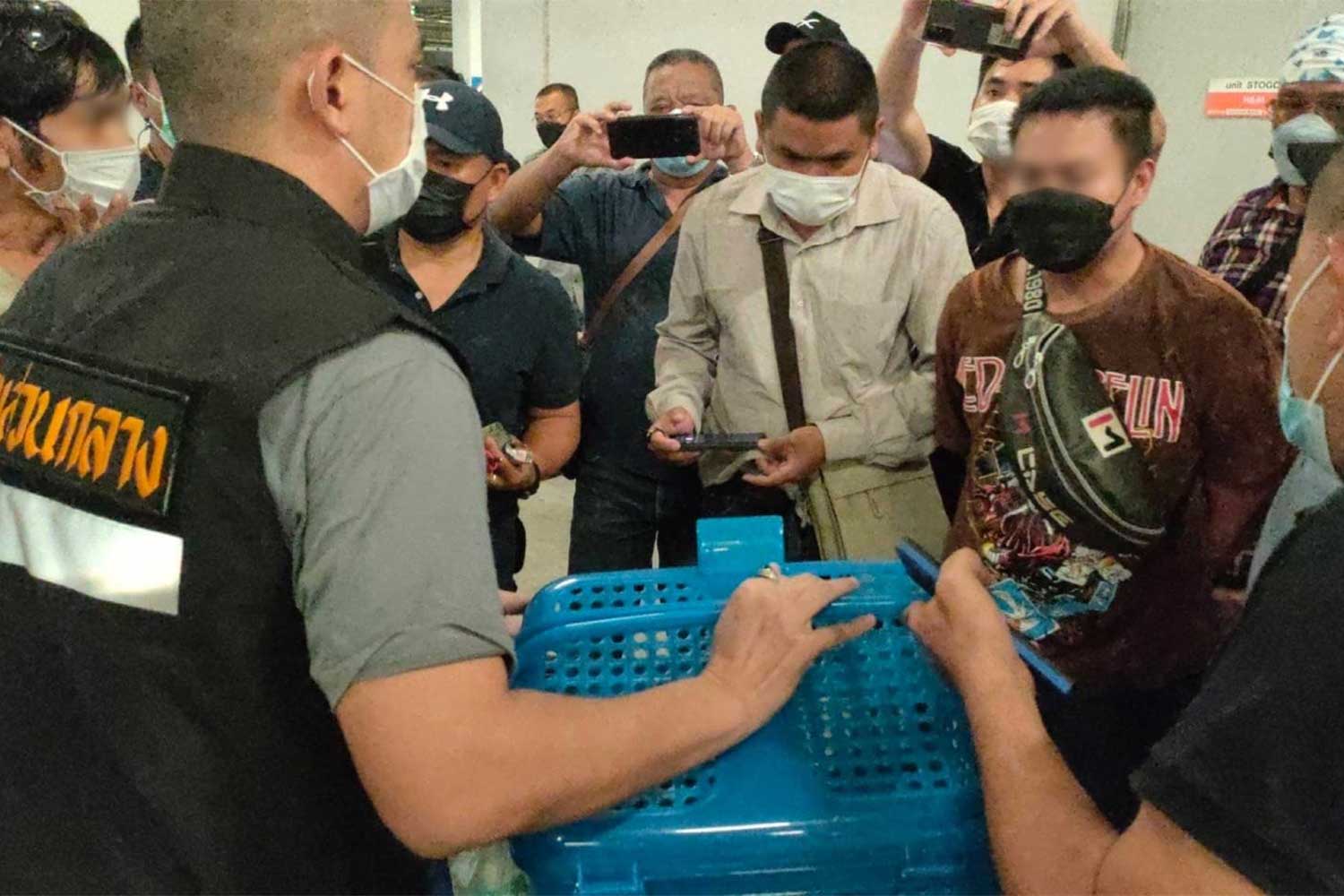 The investigation resulted in the arrest of his accomplice and alleged major wildlife trader in the South, Manusee, alias Bang See, on February 4.

Mr. Pheeraphon and Mr. Phornthiwa were allegedly selling wildlife on the internet.

According to media reports, an investigation team member posed as a customer and contacted them about purchasing a tiger cub for US$11,200.

The suspects demanded half in advance, with the balance due when the cub was delivered on April 5 in the parking lot of a shopping mall in Nonthaburi.

The two men arrived with the third suspect, Chatree, and were all arrested. During questioning, the trio allegedly admitted smuggling the tiger cub from Laos through a natural border crossing.

According to media reports, Mr. Chatree would find the animals when selling wildlife, while Mr. Pheeraphon and Mr. Phornthiwa would contact customers.

The suspects were turned over to Bang Yai police for further investigation. Trading of Tiger Cubs and Wildlife

Thousands of tigers are bred in captivity in China, Thailand, Laos, and Vietnam. The skins, bones, claws, teeth, and meat of these farm-raised cats are in high demand.

The poaching of Asia’s last 5,000 wild tigers is driven by this low-risk, high-value enterprise run by international crime syndicates. China is the largest consumer, followed by Vietnam.

These captive tigers, which are inbred and crossbred, will never be released into the wild.

Human actions that include slaughtering or trading live tigers and their prey, as well as encroaching on their last slivers of habitat, continue to endanger their wild survival.

It is for this reason that tigers are the most endangered of the big cats.

Tiger parts have been used for millennia as talismans and as medicines. Traditional Chinese medicine employs nearly everything from whiskers to tail, though there is no scientific evidence to support their efficacy.

The United Nations estimates that Asia’s black market wildlife trade is worth up to $23 billion per year.