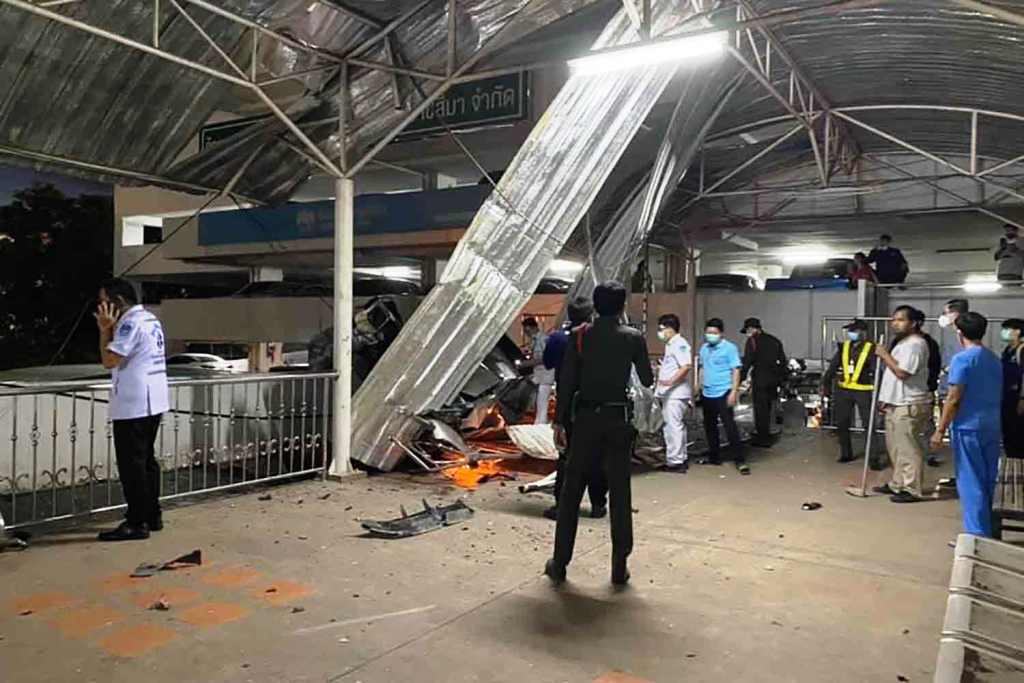 Two people have been injured in northeastern Thailand after their Toyota pickup truck crashed through the guard wall at a hospital parking lot. The pickup truck then dropped six stories into a passageway on the send floor of the hospital in Nakhon Ratchasima, on Wednesday night.

The Toyota Vigo pickup truck was registered in the northeastern province of Nakhon Ratchasima, ended its plunge as a wreck in a passageway on the second floor of the building.

The incident happened at Maharat Nakhon Ratchasima Hospital around approximately  7 pm, police said. Witnesses at the accident scene said the driver had earlier quarrelled with a woman in the parking building. In anger, he backed and crashed through the defence wall of the hospital’s parking lot.

Police told Thai Media that one of the injured was the driver of the Toyota pickup truck. The other injured person was buying food on the ground floor and was struck by a chunk of shattered concrete from the eighth-floor parking lot wall.

In other news, a married couple has miraculously escaped with only minor injuries when their Toyota pickup truck laden with logan fruit plunged off an expressway onto the road below in central Thailand on Wednesday.

The driver and a woman passenger sustained only minor injuries despite their pickup truck plunging more than 10 metres to the road below.

The driver of the Toyota pickup truck was later identified as Somchai Traiprom, 32, and his wife Renu Chumjangreed, 42.