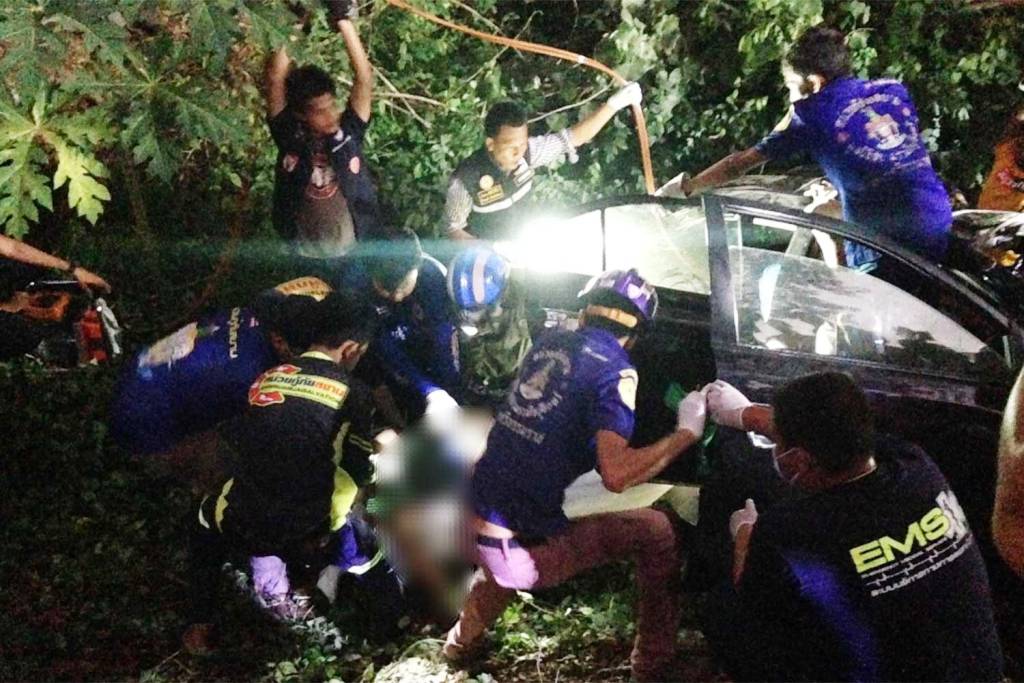 Three people were killed and another severely injured when a car and a pickup truck collided head in Southern Thailand on Wednesday. Tragically one of the victims was an expecting mother.

Both vehicles, an Isuzu pickup and a Toyota Yaris, were hurled off the road and down an embankment.

The driver of the pickup survived the crash, but trapped in the wreckage. He was extracted by rescuers and rushed to Hospital. He was later transferred to Maharaj Nakhon Si Thammarat Hospital.

Three people were found dead in the wreckage of the small sedan, one man and two women. It took rescue workers several hours to retrieve their bodies from the wreckage. One of the women was pregnant, Pol Col Thian said.

Police said the two vehicles were travelling in opposite directions and had collided head-on. Both were reported to be going fast. The investigation was continuing.

Meanwhile, one person was killed and three of his family members injured in Surat Thani province after a violent confrontation with another family.

Police said Wednesday they were alerted to a shooting incident at a house in Bang Sawan subdistrict.

At the scene, they found the body of a man lying dead on the ground with a gunshot wound. Three other persons had knife wounds. The deceased and injured persons were all from the same family.

The alleged shooter, was waiting to turn himself in to police at the crime scene. His 14 year-old son had also allegedly attacked the three victims with the knife.

Furthermore an investigation revealed that the incident stemmed from a family quarrel that escalated into a fistfight. After which led to a violent altercation because of anger and face.

Police charged the shooter with murder and his son with assault with a weapon. They reportedly confessed to their crimes the Nation reported.