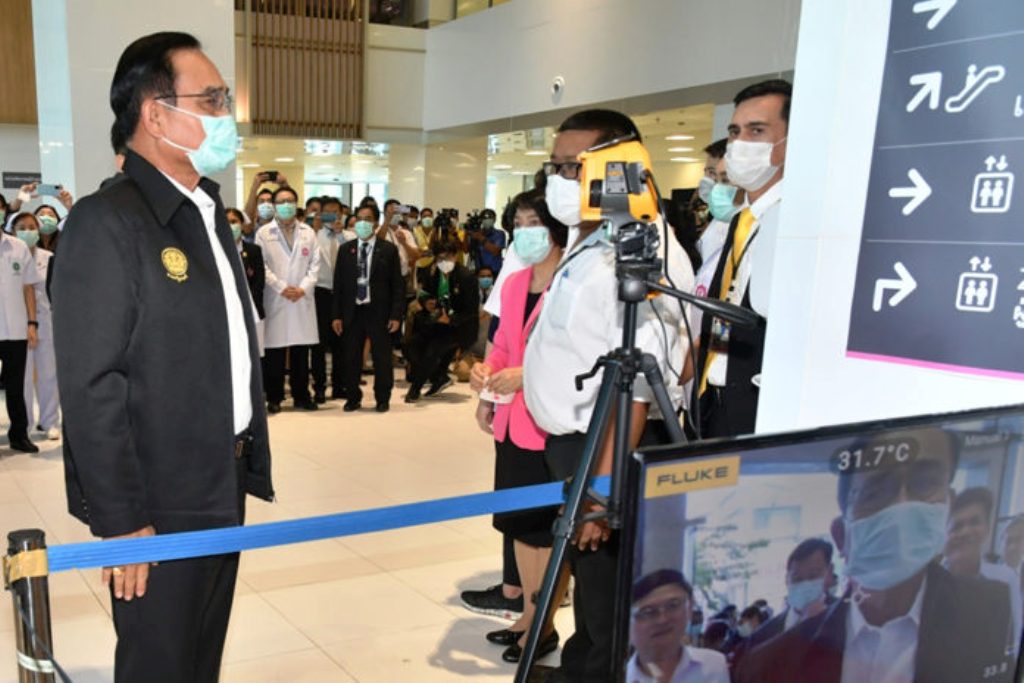 Thailand’s Prime Minister has said he will invoke an state of emergency decree on Thursday with the aim of limiting people’s movements. Above all forcing them to stay at home in a bid to stop the spread of Covid-19 Coronavirus.

In a live televised announcement at Government House, Prayut Chan-o-cha said the new requirements will be implemented on Thursday. Furthermore a committee will be formed to work out measures on a daily basis.

This latest move comes in response to a Public Health Department report on Tuesday that the virus has claimed three more lives. Consequently raising Thailand’s death toll to four. Furthermore 106 new infections were recorded, bringing the total number of infections in the country to 827.

Tuesday’s number of new confirmed cases was lower than the 122 recorded on Monday.

Dr Walailak Chaifu, the epidemiology director of the Disease Control Department, said Covid-19 had now spread to 47 provinces. With boxing stadiums in Bangkok being the epicentre. The ratio of male to female patients was 2:1.

The prime minister said that as per the 2005 Executive Decree on Public Administration in Emergency Situations, and with the cabinet’s approval, the government may consider imposing a state of emergency for up to three months though it may be renewed. Once implemented, every agency’s jurisdiction in preventing and mitigating the situation will be transferred to the prime minister.

“Requirements will be announced on Thursday. They will be issued on an ongoing basis to reduce the epidemic. Some will be requests for cooperation and others will be compulsory,” the prime minister said.

“Do not return to your home provinces. If you have to, you will face various screening measures. There will be checkpoints along the way. Please quarantine yourselves at home. Quarantine facilities will also be opened locally and by the government,” Gen Prayut said, adding that many places will also subsequently be closed.

“Many people have been infected. There must be field hospitals and large-scale quarantine areas,” the prime minister said. “If the situation does not improve, there will be a total lockdown.”

Gen Prayut also warned that during the state of emergency, people should be careful about what they post on social media. Those who violate these orders can be arrested and prosecuted, he said.

He added that vendors who raise the price of products unreasonably will also face penalties.

A government source said Gen Prayut had sought approval to invoke the emergency law during the cabinet’s first teleconference. At the teleconference, Deputy Health Department Minister Sathit Pitutecha proposed the decree only be imposed for one month, the source said.

The source added that Deputy Prime Minister Wissanu Krea-ngam explained to the cabinet that once the decree is enforced, the prime minister has the power to issue directives. Above all without having to seek cabinet approval.

Mr Wissanu also told the meeting that the decree will not mean a national lockdown, because Thais overseas will still need to return, the source told the Bangkok Post.

Overlapping working hours will be adopted for government officials, and employees at private companies, though the Bangkok governor and provincial governors still have the power to order the closure of at-risk locations. However, supermarkets, markets, restaurants, food vendors and banks and financial institutions will be allowed to remain open, the source said.

After news emerged of the government’s plans to declare a state of emergency. People reportedly flocked to supermarkets to stock up on food and essential items.

Of those who succumbed to the disease on Tuesday, three were Thai men with underlying conditions, said Dr Taweesin Wisanuyothin, spokesman for the Public Health Department.