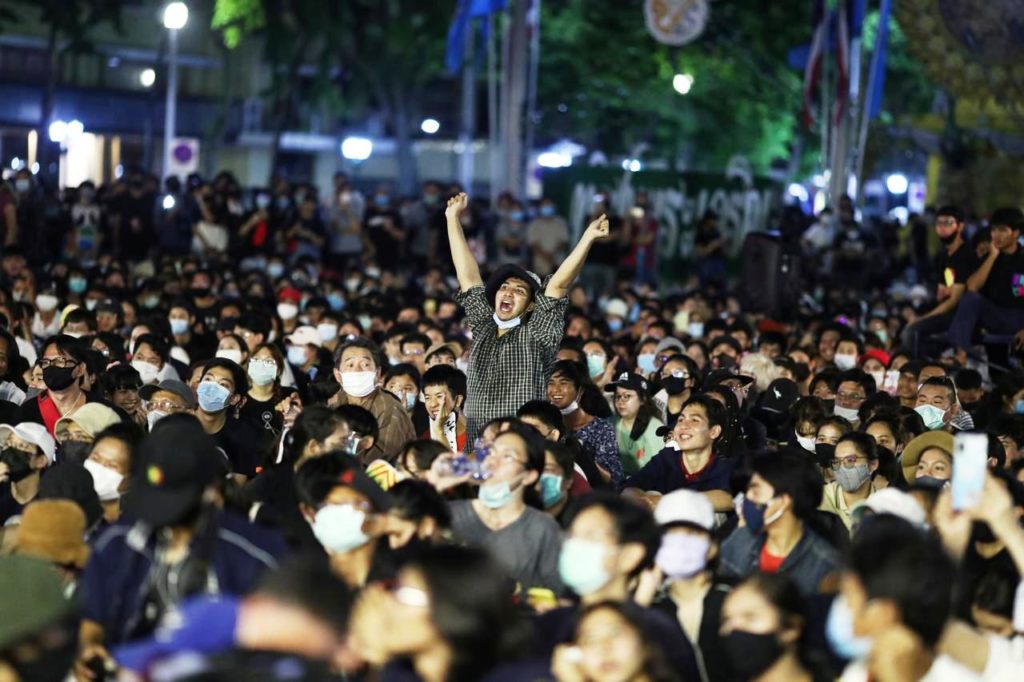 More than 10,000 Thai Anti-government protesters chanted “down with dictatorship” and “the country belongs to the people” at a rally in Bangkok on Sunday. By far Thailand’s biggest anti-government demonstration since the 2014 coup.

There were cheers for protestors calls to curb the monarchy’s powers. A taboo subject that is punishable with a 15 year jail sentence. As well as demands for Prime Minister Prayuth Chan-ocha to step down; a new constitution; and an end to the harassment of government opposition activists.

Student protestors have led anti-government protests throughout Thailand almost daily for the past month. But Sunday’s demonstration drew a broader crowds. Thailand has experienced decades of protests punctuated by military coups.

“We want a new election and a new parliament from the people,” student activist Patsalawalee Tanakitwiboonpon, 24, told the crowd. “Lastly, our dream is to have a monarchy which is truly under the constitution.” The Metropolitan Police Bureau put the crowd at 12,000 at around 7pm. However Anti-government protest organizers claimed more than 20,000 were calling for a restoration of full democracy.

Vehicles were also barred from entering the area for the safety of the demonstrators. Furthermore police were using the compound of Satriwithaya School as a command centre for officers to maintain law and order.

Meanwhile, Thailand’s Prime Minister Prayut Chan-o-cha has pleaded for calm and patience from police deployed at the rally site.

Speakers at the rally said their protests have expanded beyond students to include a wide cross-section of the population. “Free People is now not limited only to students, they said. The anti-government protests also includes people from different aspects of society. Protestors ranging from artists and labourers to people from all walks of life,” it said.

Trakul Meechai, a political scientist at Chulalongkorn University, told Thai PBS the government and Parliament should hold an urgent meeting to address their calls and make clear their positions on the demands.

The new round of anti-government protests started on July 18 before spreading into several provinces, particularly at school and university campuses.

How To Generate Sales Leads With Purchased Email Lists?