A 15-year-old student was killed when a homemade hand gun was accidentally fired by another student in the classroom. Students and teachers initially said the accident was caused by a computer explosion.

It happened on Thursday afternoon at Wat Lad Pla Duk School in Nonthaburi, in central Thailand.

15-year-old Noppasil Ngamsud sustained serious injuries to his face, including a wound about 3-4 centimeters deep near his left eyebrow. Rescue workers who rushed to the scene administered CPR but were unable to save his life.

Police initially investigated the new computers in the classroom after students and a teacher reported hearing an explosion.

There was damage to the keyboard at the desk where student was sitting and some key caps had fallen. However, officers found no other signs of damage to the ten computers.

The explosion occurred around 1.30pm, shortly after Grade 9 students sat down for class, according to the computer teacher.

She said she ran around the classroom to check and found one bloodied student lying unconscious below his computer station. She told one of the students to alert teachers and have them call the police and rescue workers.

A 15-year-old boy who was sitting next to Noppasil said that the explosion occurred about 10 minutes after he turned off his computer.

There were no burning odors or suspicious sounds before hand, he said.

He said the loud explosion left him with a ringing in his ears. Another classmate who had been sitting on the other side of the victim was slightly injured by the explosion.

However, Nonthaburi’s deputy police chief was not convinced by the teacher and student statements, and ordered a forensics doctor to examine the victim’s wounds.

There were traces of a bullet in the students eye.

During further questioning, one student admitted that he had found a homemade gun and brought it to school. It had discharged accidentally when he was playing with it, a police source said.

In the company of two relatives, Ms. Paweena Ngamsud, the mother of the deceased student, visited the school. When they saw his body, they burst into tears.

Ms Paweena, 35, explained that Noppasil was her only child and he was good with computers. She said never caused any trouble for her family.

She and her family were awaiting further information from forensic police regarding the death of her son.

In response to the incident, Amporn Pinasa, secretary-general of the Office of Basic Education Commission, has ordered an investigation into the school and its director.

He will be questioned by a committee over allegations of negligence, Mr Amporn said. 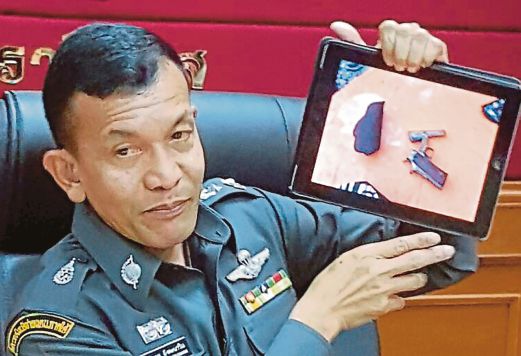 It is a well-known fact that homemade guns are prevalent in Thailand, even having their own nickname: “Thai Pradit” guns. A homemade gun can be purchased online for just 6,000-8,000 baht by gun enthusiasts who surf the internet.

Recent years have seen perpetrators use homemade guns to kill and attack their victims, as well as to rob gold shops and even grocery stores.

According to a 2017 report by The Small Arms Survey, an independent research group based in Geneva, Switzerland, Thailand has the highest gun ownership rate in Southeast Asia.

According to the Royal Thai Police, 70% of gun homicides — and homicides that occur with unregistered guns — involve homemade guns as the weapon used.

Despite the threat these weapons pose, the government has never had clear strategy to solve the problem. Gun violence rarely gets the attention of the government or civic groups, unlike other social issues such as alcohol abuse or smoking.

As for existing law, Thailand has only one key piece of legislation on gun control and it dates back more than 70 years.

The Controlling Firearms, Ammunition, Explosives, Fireworks and Imitation of Firearms Act 1947 was issued to maintain national security after a coup in 1932.

Even though this legislation is written to make it harder for civilians to carry guns, it has loopholes that can encourage sales on the black market.

In terms of homemade guns, this legislation does not have measures or penalties to deal with such weaponry or prevent owners of recreational guns from modifying them into dangerous firearms.