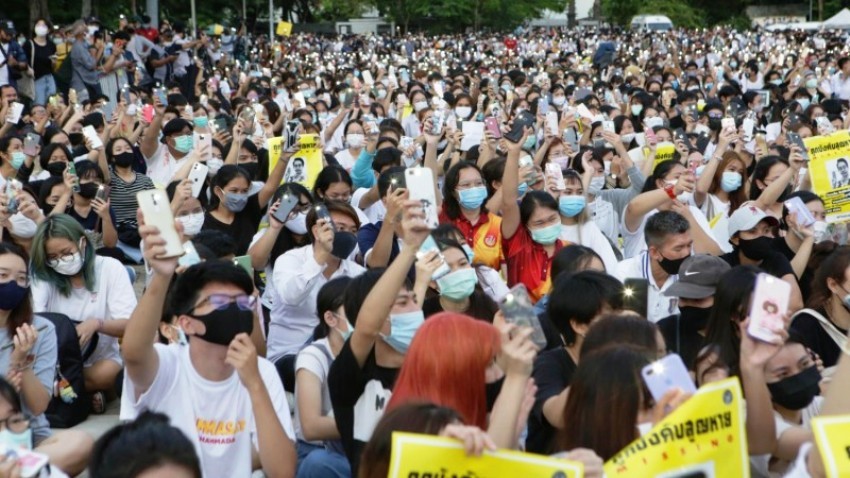 A group of Senators in Thailand are urged authorities to probe the source of funding for Anti-Government protestors and also jail them. This comes after anti-government protestors gathered at Thammasat University’s Rangsit campus on Aug 10.  The Senators believe the protest were seen as offensive to the monarchy.

Junta appointed Senator Somchai Sawaengkarn, for instance, proposed at a Senate session that the Anti-Money Laundering Office (Amlo); the Department of Special Investigation (DSI); and the Royal Thai Police investigate the money trail behind the protests.

He said renting the giant LED screen that was used to display images mocking a portrait of His Majesty the King would normally cost hundreds of thousands of baht.

Digital Economy and Society Ministry and Technology Crime Suppression Division were also urged to track and take legal action against people who disseminated copies of the illegal content on social media, he said.

Offending the monarchy is illegal in Thailand under the lese majeste law under article 112 of the Criminal Code.

Senator Somchai also called on the police to petition the court to withdraw bail granted to human rights lawyer Arnon Nampa and political activist Panupong Chadnok. They have been allowed out on bail in a sedition case on the condition that they must not repeat the offences they are accused of.

They were caught in a video clip making a speech at Monday night’s gathering allegedly offending the monarchy and urging other people to join them. Mr Somchai believes police already have a copy of the video clip as evidence.

Mr Somchai also called on the Foreign Ministry to seek cooperation from Japan. Where historian Pavin Chachavalpongpun and social critic Somsak Jeamteerasakul now live. Even more to track them down and extradite them back to Thailand.

Both Mr Pavin and Mr Somsak were seen speaking on Monday night via video. The senator urged media to stop covering gatherings that violate the lese majeste law.

At the anti-government protest rally students announced a set of 10 demands. These demands included changes in the country’s highest institution, including Section 112 and royal prerogatives.

Thailand’s Prime Minister Prayut Chan-o-cha on Tuesday said that the government had been closely monitoring the situation and admitted he was worried about it. However, he refused to comment on the protesters’ demands.

Meanwhile, Thammasat University on Tuesday issued a statement distancing itself from the rally and apologized for the rally that took place on its campus.