Teachers at an elementary school in northern Myanmar attacked by a military helicopter last week have described the horror of the attack, including witnessing a wounded child screaming in agony and begging to die.

The violence at a school in Let Yet Kone village, Sagaing region, killed 14 people, including 12 children, the youngest of whom was seven years old.

The United Nations (UN), the European Union (EU), and human rights organizations have all condemned the incident, in which the Myanmar military claimed it was targeting rebels who were using civilians as human shields.

According to one teacher, some children were playing outside while others were in class when two Mi35 helicopter gunships opened fire with machine guns and heavy weapons on the school.

“One girl was hit on the back of her head… there was a lot of blood coming out,” the teacher told Agence France-Presse (AFP) over the phone, describing frantic attempts to administer first aid.

According to the Myanmar teacher, students scurried under tables as smoke billowed around them.

The helicopters then landed, and troops stormed the school grounds, ordering everyone inside to come out, according to the teacher.

According to the teacher, some children left a trail of blood as they crawled out, while others were too injured to move from their hiding spots.

According to the teacher, the mother of a wounded student pleaded with soldiers to let her into the classroom where her seven-year-old son was bleeding to death.

“The soldier asked her, ‘Do you want me to shoot and kill you?'” said the teacher.

Her son was bleeding so profusely that he appeared to be “drowning in water,” they added.

The mother and her dying son were later reunited; he was missing a hand and a leg.

“The boy was still alive,” the teacher said, “and he said, ‘Mummy, it’s very painful, kill me, kill me, I can’t stand the pain.”

According to the Myanmar teacher, the tearful mother begged the soldiers not to take her son’s body, but they insisted he was not dead and took him to the hospital.

“‘Let me make a funeral for my baby,’ cried the mother.”

A second teacher described her students running inside as the helicopters approached, only to be hit by a large explosion.

“I saw one child get hit and yell for help. A teacher told Radio Free Asia that he was covered in blood and kept yelling for help, but I didn’t dare to go out to help him.

As the shooting continued, the second teacher fled the building, taking 20 students to hide under a large tamarind tree while the injured boy screamed for help.

Many people in Let Yet Kone village are still waiting for word on some students who have gone missing since the attack. 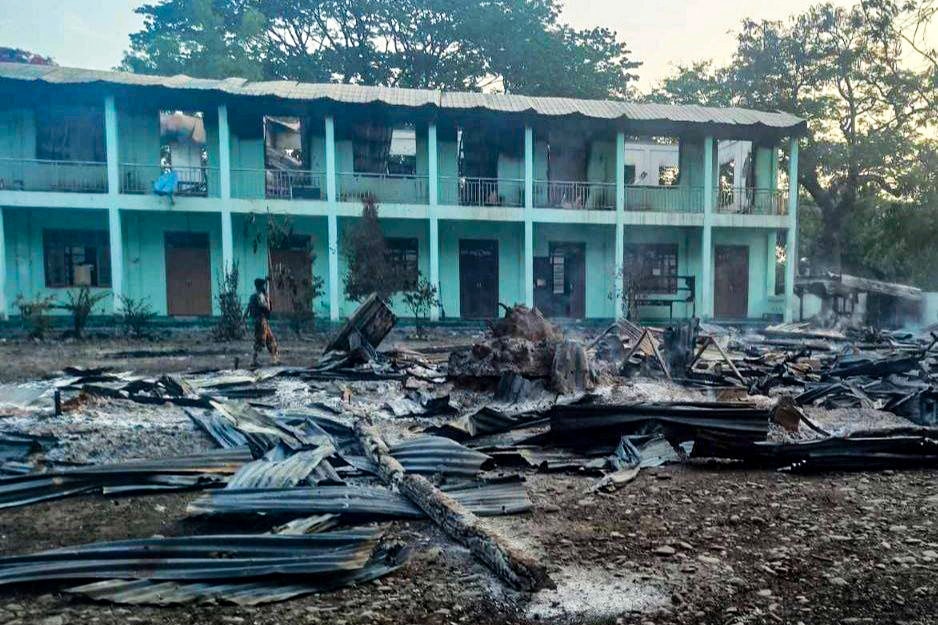 There are no plans to reopen the school, which had nearly 250 students and over 20 teachers.

The junta said it sent troops in helicopters to the village after receiving information that fighters from the ethnic rebel group Kachin Independence Army (KIA) and a local anti-coup militia were moving weapons.

The military accused the insurgents of using civilians as human shields and claimed to have recovered mines and explosives from the village.

“Security members provided necessary medical care and arranged for patients to be transported to a nearby hospital,” the military said in a statement.

On Tuesday, Myanmar news Junta spokesman Zaw Min Tun accused the KIA of transporting villagers to a monastery and then firing on troops from there.

According to a local monitoring group, Myanmar has been in chaos since the military seized power in a coup in February last year, with nearly 2,300 civilians killed in a crackdown on dissent.

Fighting has been fierce in the Sagaing region of the country’s northwest, with entire villages being burned down during clashes between anti-coup fighters and the military.