Attacks by Myanmar’s Military on pro-democracy insurgents and their allies frequently result in civilian deaths.

However, on Friday, the number of children killed in the airstrike on Tabayin township in the Sagaing region is the highest since the army seized power in February of last year, ousting Aung San Suu Kyi’s democratically elected government.

The army’s takeover sparked widespread nonviolent protests across the nation. The military and police responded with lethal force and proliferation of armed resistance in cities and rural areas.

According to UNICEF, fighting has been particularly intense in Sagaing, where the military has launched multiple offensives, sometimes torching villages and displacing more than half a million people.

The attack occurred on Friday in the village of Let Yet Kone in Tabayin, also known as Depayin, about 110 kilometres (70 miles) northwest of Mandalay, the second largest city in Myanmar. 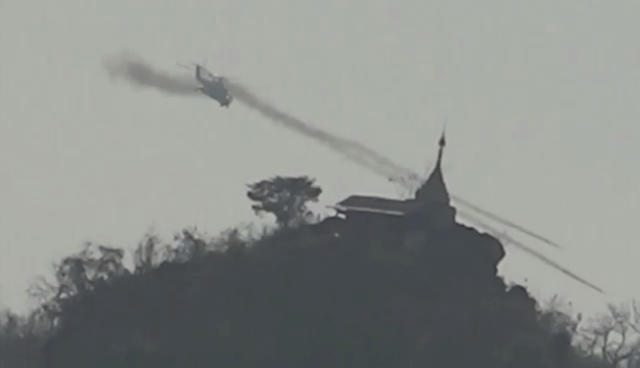 Two Mi-35 helicopters hovering north of the village began firing machine guns and heavier weapons at the school, located within the compound of the village’s Buddhist monastery, school administrator Mar Mar was attempting to get students to safe hiding places on the ground floor classrooms.

Mar-Mar works alongside 20 volunteers who instruct 240 kindergartens through eighth-grade students. She and her three children have been hiding in the village since fleeing for safety to avoid the government’s crackdown.

She employs the alias Mar Mar to conceal herself and her family from the military.

She stated that she had not anticipated trouble because the aircraft had previously flown over the village without incident.

“Since the students had committed no wrongdoing, I never imagined that they would be brutally shot with machine guns,” Mar Mar told The Associated Press on Monday via telephone.

She said by the time she and the students and teachers were able to seek refuge, one teacher and a 7-year-old student had been shot in the neck and head, and Mar Mar was forced to use pieces of clothing to staunch the bleeding.

“They continued to fire from the air into the compound for an hour,” Mar Mar said. “They did not pause for even one minute. At that time, all we could do was chant Buddhist mantras.”

When the airstrike ceased, approximately 80 soldiers entered the monastery compound and opened fire on the buildings.

The soldiers then commanded everyone in the compound to evacuate the structures. Mar-Mar reported seeing approximately thirty students with wounds on their backs, thighs, faces, and other body parts. Some students had lost limbs.

She stated, “The children informed me that their friends were dying.” “I also heard a student shout, ‘It hurts so much! I can no longer stand it. Kill me, if possible. This voice continues to reverberate in my ears,” Mar Mar said.

She reported that at least six students were killed in the school, and a 13-year-old boy working at a nearby fishery was also fatally shot. She reported that the airstrike also resulted in the deaths of at least six adults in other areas of the village. Soldiers removed the cadavers of the deceased children.

She stated that more than twenty people, including nine wounded children and three teachers, were also abducted by the soldiers.

Two arrested were allegedly members of the anti-government People’s Defense Force, the armed wing of the military’s resistance. Additionally, security forces torched homes in the village, forcing its inhabitants to flee for their lives.

A volunteer in Tabayin assisting displaced people reported that the soldiers in nearby Ye U township cremated the bodies of the deceased children.

Mar-Mar stated, “I am now telling the international community about this because I want justice for our children.” We require genuine democracy and human rights rather than humanitarian assistance.

A day after the attack, Myanma Alinn newspaper reported that security forces had inspected the village after receiving information that People’s Defense Force members were hiding there.

According to the report, members of the People’s Defense Force and their allies from the Kachin Independence Army, an ethnic rebel group, hid in houses and the monastery before opening fire on the security forces, resulting in the deaths and injuries of villagers. It was reported that the injured were transported to hospitals, but there was no mention of the student’s condition.

The Assistance Association for Political Prisoners in Thailand reports the Myanmar army has killed at least 2,298 civilians since it seized power a year ago.

The U.N. Child Rights Committee reported in June that 260 documented attacks on school children and education personnel had occurred since the military coup.