On Friday, a crane truck operator was electrocuted to death, and two other workers were injured when the boom crane touched a live power wire on a roadside in northeastern Thailand.

When police and rescue workers arrived, they discovered the burnt body of 46-year-old crane driver Sompong Thaemsomdee beside the boom crane.

According to worker Kitakorn Supamat, while Sompong, a resident, was unloading sewage pipes to be buried on the roadside, the boom hoists accidentally touched a live wire, causing the vehicle to catch fire.

One of the workers attempted to assist the driver but was electrocuted.

The electricity also injured another worker on top of a hoisted pipe. He was severely injured when he fell. 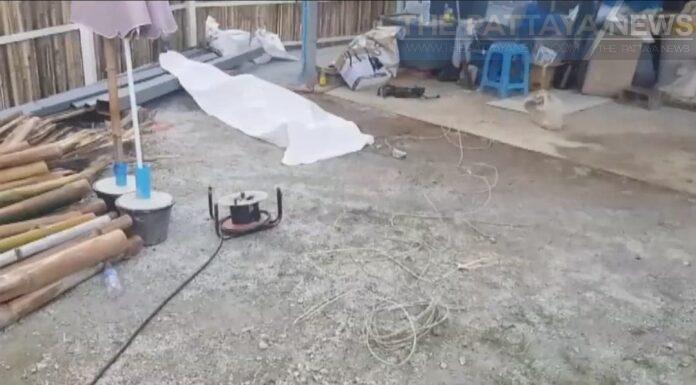 In May of this year, a 42-year-old man was electrocuted to death after stepping on a live power box on a wet floor and breaking it.

Yutaka Wanthayat, 42, was discovered face down on a wet floor with a fractured power outlet at his feet. The police then unplugged it, assuming the victim had accidentally stepped on it and been electrocuted to death.

Oranong Premkamon, the victim’s 27-year-old wife, and his mother-in-law arrived at the accident scene later and were reportedly devastated to learn that her husband had died.

They told police that Yuttana worked in a shopping mall and did odd jobs like installing electrical outlets and furnishing houses to support his family.

According to the house owner, the victim was hired to build a roof for her mushroom farm.

She was unaware of the accident until someone informed her that the victim had passed out on the floor.

In September, a student in Udon Thani was praised for risking his own life to save a young boy who was electrocuted while wading through floodwater.

Atthachai Argudom, a 19-year-old student at Udon Thani Technical College, is seen in a widely shared video clip pulling the unconscious 12-year-old out of shin-deep water.

The drama unfolded near a power pole outside Satri Rachinuthit School in the Northeast province. According to witnesses, electricity was suspected of leaking from the power pole.

During the rescue, Atthachai received electric shocks that left him feeling weak.

He and the student were both taken to the high ground within the school compound before being rushed to the hospital.

Udon Thani Governor Siam Sirimongkol paid a visit to Atthachai in the hospital. He thanked the young man for his selfless kindness and gave him money to purchase a new phone.

In a rush to save the boy, Atthachai dropped his phone into the floodwater.

Kanokrat Loeichaiyaphum, the schoolboy’s mother, also visited her son’s rescuer in the hospital. She claimed that her son would have drowned if Atthachai had not rescued him from the floodwaters.

“I am grateful to this man for saving my son’s life.” “Thank you for your bravery and good deed,” the 45-year-old said as he stood by Atthachai’s bedside.

Supannee Saelim, Atthachai’s grandmother, said he has lived with her since childhood following his parents’ divorce.

“I am proud of him and relieved that he is safe,” she told the press.