Hundreds of Protesters Rally for Democracy in Bangkok

Several hundred of protestors led by a group called Free Youth gathered on Saturday near the Democracy Monument in Bangkok. The protestors called for the dissolution of the House and a rewrite of the constitution.

The rally was the first major political demonstration since the end of most Covid-19 restrictions. And while the emergency decree, including a prohibition on public gatherings, remains in effect, government officials have said they would not apply it to political events if they remained peaceful.

Hundreds of police officers were on hand to keep the peace and the event went ahead largely without incident. At one point demonstrators began to push back a metal barrier that had been set up to keep the crowd from spilling into the road nearby, and the police eventually backed off.

“No one hates the nation here,” one protest leader said, as he led the crowd in singing the national anthem at 6pm.

The rally was staged to press three demands: dissolution of the House, a rewrite of the constitution and an end to official and judicial harassment of those critical of the government. 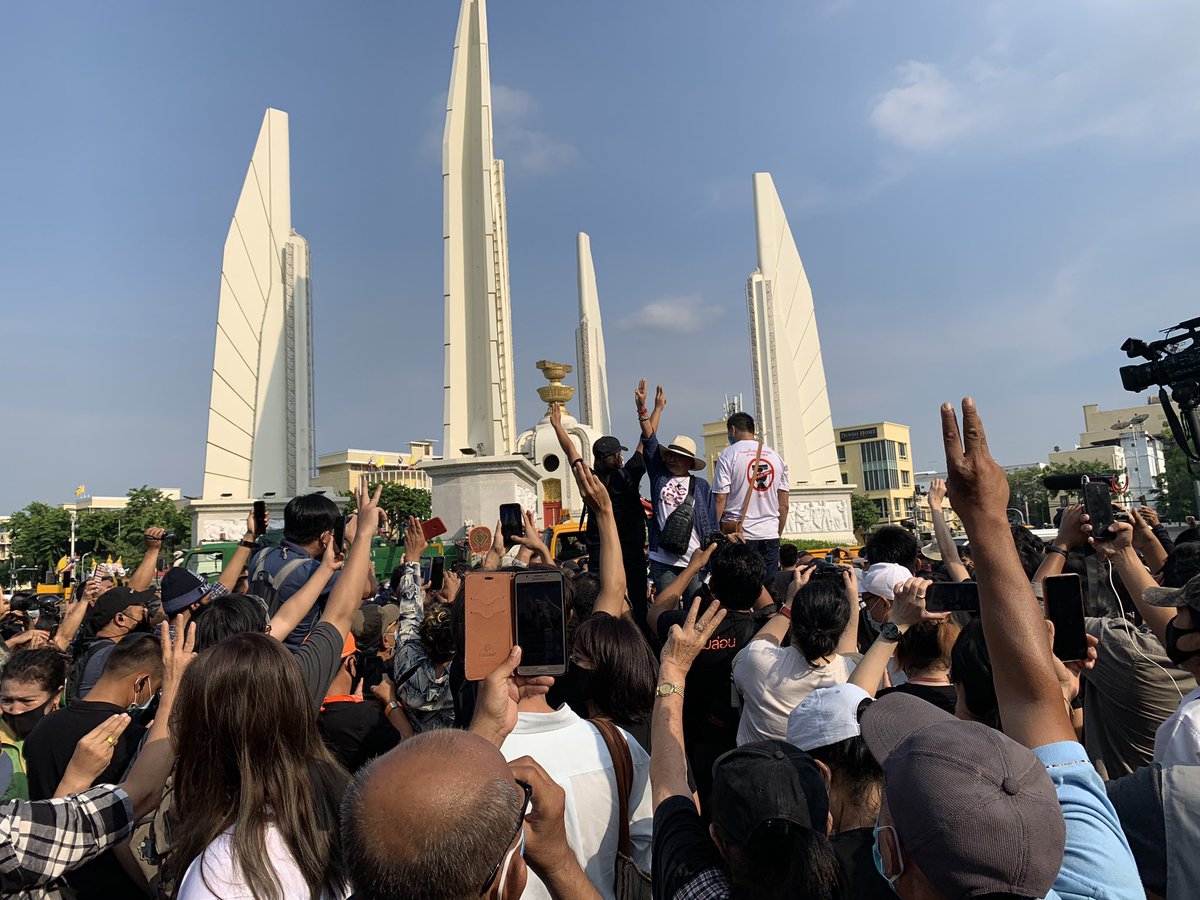 Earlier on Saturday, City Hall staff were seen arranging plants and flower pots at the base of the monument and barricading the area. In response to online criticism, officials said it was routine work, suggesting it had nothing to do with the planned rally scheduled at 5pm on the same day.

Prior to the event, organizers took to Twitter to remind those who planned on attending to wear masks and carry saline water (in case tear gas is used).

“112 free pizza also available for early birds,” read the tweet. (The pizza reference is a play on the delivery phone number of a local chain, which contains the numerals 112, the same as the Criminal Code section on lese majeste)

“Don’t leave this burden for our children who will have to endlessly demand justice. End it now,” the tweet added.

When people started to converge on the area at 5pm, they had no place to assemble and had to sit in front of a McDonald’s restaurant near the monument.

A number of men believed to be plainclothes officials took video and pictures of the gathering.

At 5pm, musicians from Rap Against Dictatorship performed a new song and sang their anti-establishment anthem Prathet Ku Mee with the demonstrators joining in.

Among the speakers at the rally was Free Youth secretary-general Tattep “Ford” Ruangprapaikitseree, one of the two activists who had brandished placards slamming the government for its mishandling of the quarantine of an Egyptian military delegation in Rayong province last week.

Other speakers were Mike Panupong, chairman of a group called Eastern Youth for Democracy, Juthathip Sirikan, chairwoman of the Student Unions of Thailand, and Non Nattachon from Eastern Youth.

Mr Tattep took the stage at around 5.20pm, and took aim at the government’s mishandling of the Covid-19 situation.

“Some 500,000 of us are about to lose our jobs. How can we go on from here? The outbreak has almost been contained but the government dropped its guard and allowed infected VIP guests to enter,” he said.

He also said he thought the 2019 election would bring more freedom but people continue to be harassed.

“Besides, we’ve inherited a sinful legacy in the form of the 2017 constitution that prolongs the ruling power. So the third thing we need to do is to make a new one that truly belongs to the people.”

Parit Cheewarak, a co-leader of the Student Unions of Thailand, told the crowd the gathering was a warning for the government. “The emergency decree has been used to control people. The more it continues to be abused without legitimacy, the less sacred it becomes,” he said.

“Lift the decree immediately or the people will take the matter into their own hands.”

Ms Juthathip then asked the protestors to shine their mobile-phone flashlights on the monument and the sculpture of the constitution “to show how dark it has become”.

After that, the protesters chanted: “Prayut out”. The organisers pledged to stay overnight at the monument because “we’re so afraid it will disappear from this country”.

A handful of other symbols related to the 1932 revolution that overthrew absolute monarchy have vanished in recent years, with the government offering no explanations as to why.

The resentment of progressive young people has grown in recent months as they see the current elected government is not very different from the military junta that preceded it.

They have been highly critical lately of the unwillingness of the government to follow up on the disappearance of a self-exiled anti-government activist in Phnom Penh, and the commission to a psychiatric ward last week of a man who wore a T-shirt that said “I have lost faith in the monarchy”.

A police spokesman said no charges were laid in the latter case and a hospital official said the man had agreed to be admitted to psychiatric care, something his mother disputes.