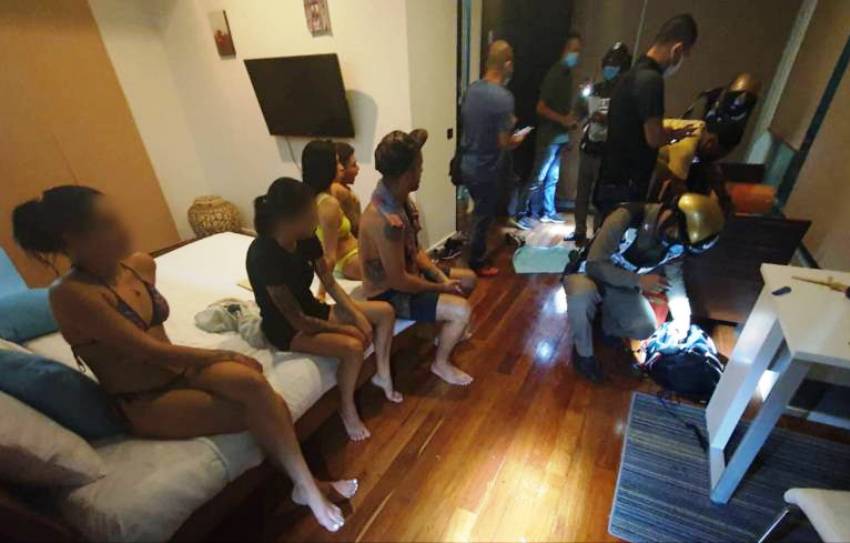 Nine foreigners were arrested in Phuket for allegedly using drugs and partying in violation of the emergency decree.

Three British men, an American man, an Australian and a Ukrainian, along with three Ukrainian women and five Thai women were found at 10pm allegedly drinking alcohol and using cocaine along with marijuana while playing loud music.

The Patong Police Station charged all of them with gathering in a crowded place violating the emergency decree. Also violating an order from the Disease Control Department which might lead to the spread of Covid-19. Police also charged one of the foreigners for being in possession of two types of drugs.

Police cracked down on the group after receiving a call that residents in the house were holding a party. They were allegedly disturbing the neighbours with loud music.

Meanwhile, the Government of Thailand has introduced a Nationwide curfew banning people from leaving home from 10pm to 4am starting Friday. In the government’s latest move to contain the spread of coronavirus.

Prime Minister Prayut Chan-o-cha announced the curfew on Thursday evening. The curfew applies to all Thai and foreigners in the Kingdom.

Exempted from the curfew are medical and banking personnel; as well as logistic workers handling consumer products; farm goods; pharmaceutical products,; medical supplies and equipment; newspapers; petrol; postal parcels; or products to be imported and also exported. Movements of people to quarantine places are also allowed.

Other exemptions are people working normal night shifts or those heading to or from airports with necessary documents stating the purposes; or officials working by the announcements or orders and those allowed by officials to leave the house on emergencies.

Violation of Curfew Jail and/or fine

Violation will result in a jail term of not more than two years and/or a fine not more than 40,000 baht. Existing curfew orders or announcements in any province with stricter requirements shall remain in effect. For relief measures, Gen Prayut said three funds would be set up to help people affected by the mitigation measures.

Centres will be set up to distribute face masks. “I won’t let anyone hoard the product and take advantage of people during this difficult time,” he said.

In terms of disease mitigation, a centre will be set up to manage travel in and out of the kingdom with strict screening, quarantine and monitoring measures. Gen Prayut also sought cooperation in delaying entry to Thailand until April 15.

In terms of communication, a briefing will be held every day by the Centre for Covid-19 Situation Administration. Unauthorized people will not be allowed to give interviews.