Financial Scams And Get Rich Schemes On The Rise In Thailand

Thailand has seen a significant increase in complaints about financial scams, selling non-existent products or doubling the money for prospective investors quickly.

Individuals have lost billions of baht as a result of scams. According to Acting Sub Lt Thanakrit Jitareerat, Secretary to the Minister of Justice, the “Forex -3D” scheme, which surfaced several years ago and was brought back to public attention following the indictment of actress Savika “Pinky” Chaiyadej, at its peak it attracted up to 50,000 victims and total investments worth up to 30 billion baht.

While law enforcement agencies may have no trouble locating and prosecuting fraudsters, recovering stolen funds for victims is different.

Some people are drawn into scams by promises of high returns that they can enjoy without the need for knowledge or expertise, according to Mr. Piyasiri Wattanavarangkul, the former director of the Department of Special Investigation Bureau.

“They are enticed by the promise of high returns in a short time and earnings from recruiting new investors. They also do not need to be familiar with the schemes. The economic situation could play a role. However, these are external factors. Greed and ignorance are internal factors, “He stated.

Mr. Piyasiri said that some people fall for such scams repeatedly, implying that they are aware of the risks and willing to take them. 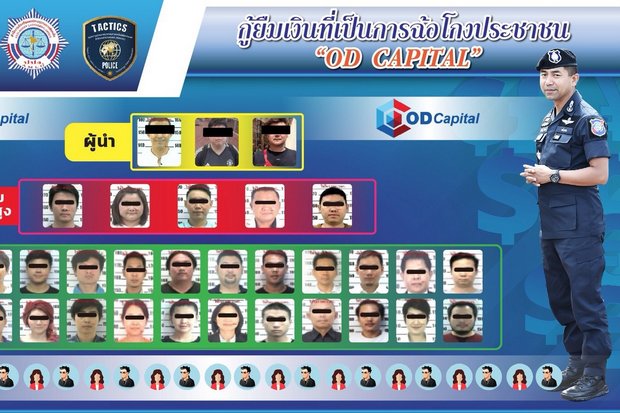 One major reason Ponzi schemes are growing is that participants are unaware of the legal ramifications. He believes it is critical to raise public awareness that Ponzi scheme participants risk losing their money and freedom if they invite others to join bogus investment schemes.

Foreign exchange trading in Thailand requires a license from the Bank of Thailand, so legal operators are commercial banks, financial institutions, and authorized agents. Scammers usually organize forex trading workshops to attract investors, giving them access to their potential victims.

In terms of cryptocurrency trading, operators in this market must obtain a license and are subject to scrutiny by the Securities and Exchange Commission (SEC).

However, according to him, many investors are unaware of this and invest with illegal trading platforms claiming to operate in other countries’ digital asset exchanges.

Direct sales are not all scams, but they are when they focus on bringing in new members rather than selling products and when members are compensated for recruiting people rather than the sales generated by their business.

Commodity investments and forward contracts are speculative investments in which individuals are duped with promises of high returns, particularly when prices rise. He claims that gold, oil, and agricultural products such as rice are used in these fraudulent schemes.

Fund mobilization scams are simple, with investors being urged to invest in stocks. The most common type of charity fraud scam is a cremation service fund, in which members deposit money with the promise that their families will receive a lump sum upon death.

According to Mr. Piyasiri, the advancement of technology and social media has provided scammers with an effective tool for defrauding people. Celebrity endorsement lends credibility to scams, even if these public figures have nothing to do with the schemes.

He said that the Royal Thai Police and the Justice Ministry’s DSI are in charge of combating this type of crime, while the Interior Ministry and the Finance Ministry play a role in raising public awareness.

On the other hand, he added that authorities must be proactive in combating scams, taking action before harm is done, such as inviting suspected scammers in for a chat when they spot scams or examining their tax records.

According to Mr. Piyasiri, Ponzi schemes cause victims more than just financial harm; in many cases, families and communities are destroyed, and some people are driven to commit suicide.

“The most important thing is that officials use technology to reach victims and ensure that their complaints are investigated as soon as possible. It is critical to recovering as many stolen assets as possible, “He stated.

He suggested that the decree on loans amounting to public fraud be improved to assist authorities in keeping up with the scams. Anyone can become a victim

They use the image of “new millionaires” to dupe people into believing they can change their lives with a small investment. People from all over Thailand are drawn to such opportunities.

According to the statistics, many victims are well-educated and have job security, so unless people are made aware of tricks and how to spot them, they will continue to fall for scams, he says.

According to the CIB chief, people running scams design their investments to keep up with people’s changing lifestyles and new technologies, and forex trading is just one example.

According to him, these business opportunities are not real, and payments will continue until the schemes can no longer attract new investors.

According to the CIB chief, social media platforms and financial transactions made easier by smartphones significantly increase financial damages.

According to Pol Lt Gen Jirabhop, police have increased awareness campaigns about scams, but the best defence is to be skeptical and conduct due diligence before investing.

“Even if they are friends or family, be skeptical. It is safe to assume that no business will or can provide you with more than what appears reasonable to expect, “He stated.

He said that if convicted of convincing people to invest in a fraudulent scheme, they face 10 years in prison.