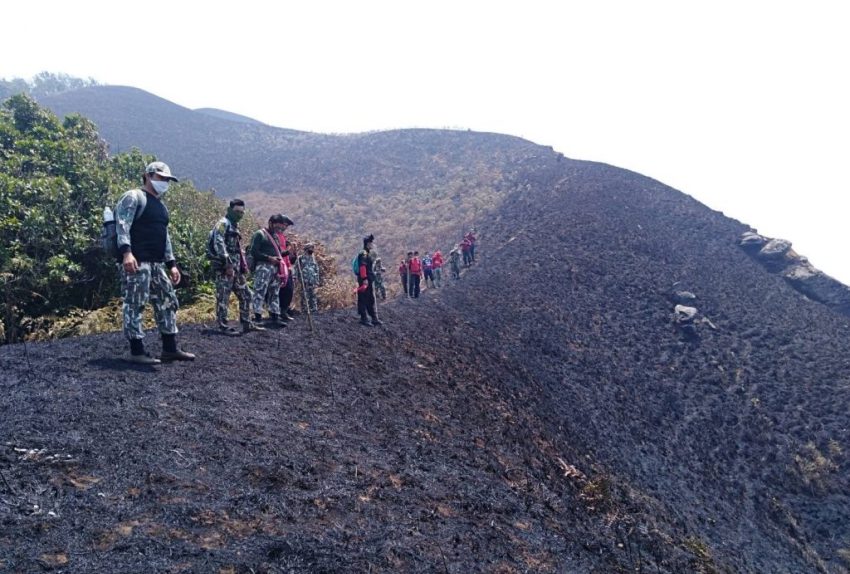 One of Northern Thailand’s most popular hiking spots Doi Mon Jong mountain has become the latest victim of a wildfire. Raging wildfires have sprung up across Northern Thailand over the past few months.

Doi Mon Jong Wod, in Om Koi District is considered an ‘Unseen’ destination, for its beauty and nature. Nearly Twenty Rai of Doi Mon Jong mountain in Chiang Mai province was turned to ash this week. A once-lush green area covering the equivalent of three football fields now forms an ugly black gash in the landscape.

Doi Mon Jong is among the 10 highest peaks in Thailand, rising 1,929 meters above sea level. It is also home to various wildlife, including wild elephants, serow and goral, a rare goat-like antelope species. The local people told authorities that there were many herds of wild elephants in the area.

The governor of Chiang Mai announced yesterday that between the 1st and 6th April there were a total of 18,913 hot spots in Chiang Mai. Most of them found in Chiang Dao, Om Koi, Mae Chaem, Hod, Phraw, Mae Taeng and also Samoeng districts.

Firefighters posted photographs of the mountain’s charred slopes. Which also draw thousands of hikers from across the country each year.