On Wednesday, a 23-year-old man was arrested after allegedly throwing eggs at King Charles III and Queen Consort Camilla in York.

King Charles and queen consort entered the city through Micklegate Bar, a medieval gateway where monarchs are traditionally welcomed to the city, and begin walking among a slew of people, restricted by barriers, eager to catch a glimpse of the reigning monarch and his wife.

Several eggs were thrown and fell to the ground without appearing to hit the royal couple, according to video footage. The man accused of throwing the eggs fought with police officers as they apprehended him.

While being held by two police officers, the protester was seen smiling for the cameras and even sticking out his tongue.

According to Metro, Thelwell, 23, is well-known for his left-wing politics and has been arrested at least five times for various climate campaigns.

He was fined in September 2020 for blocking London Bridge for Extinction Rebellion.

The 73-year-old King Charles appeared stunned as he stared at several broken eggs on the ground, trying to comprehend what had just occurred.

While officers grappled with a man at the barrier, his team appeared to assess the situation. 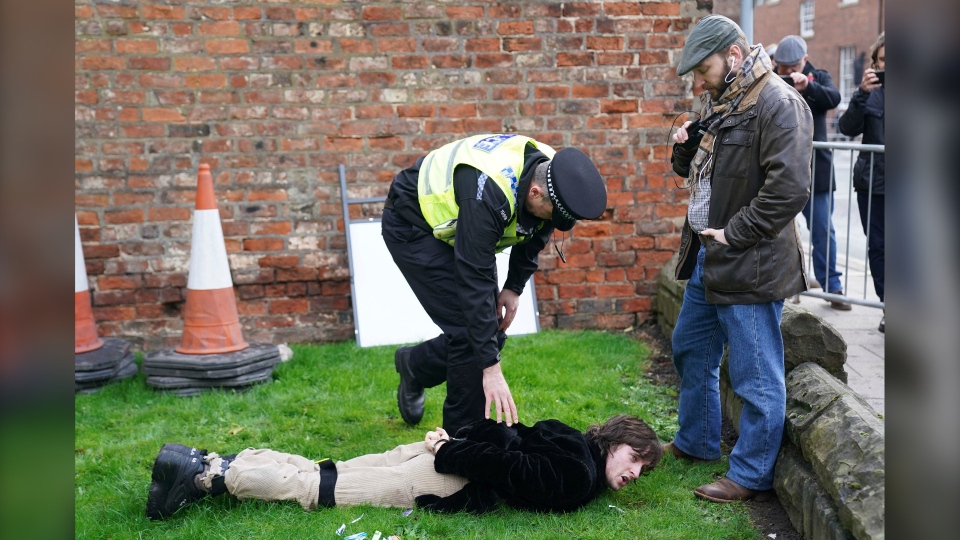 As he was being detained, the protestor booed and shouted at King Charles, “This country was built on the blood of slaves,” according to the New York Post.

Other crowd members attempted to uplift the king and drown out the negativity by chanting “Shame on you” and “God save the king” in the midst of the chaos.

King Charles and Camilla visited York as part of a tour of the United Kingdom. They also paid a special visit to York Minster, the city’s cathedral, where a statue of the king’s mother, the late Queen Elizabeth II, was unveiled.

“During her life, the late queen was always vigilant for the welfare of her people,” King Charles said at the ceremony. “For centuries to come, her image will guard what will become Queen Elizabeth Square.”

While the reason for the meeting with King Charles was not disclosed, both leaders were expected to discuss bilateral relations and how the UK can assist Nigeria in its fight against terrorism.

Both leaders communicated with each other prior to Wednesday’s meeting.

King Charles wrote to Nigeria’s president, expressing his condolences for the devastating floods that have killed hundreds and displaced millions in the West African country.