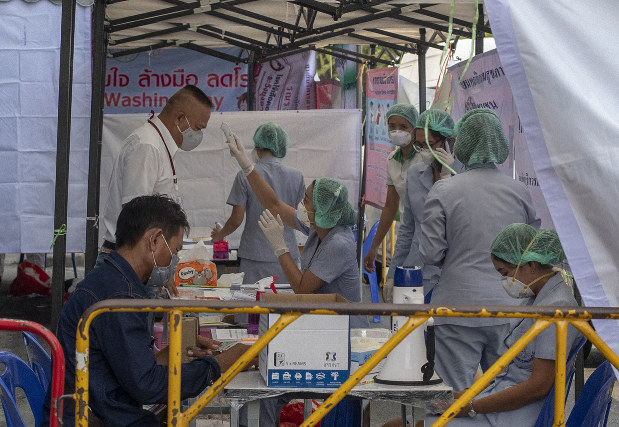 Thailand has reported 102 new Covid-19 coronavirus cases and 3 more deaths on Sunday, raising the total number of cases to 2,169. The country also reported 3 new deaths, bringing the total to 23 since the outbreak first emerged.

The latest fatalities were two Thai men and a man from Switzerland the Bangkok Post reported.

One of the Thai victims was a 46-year-old man who returned from working in London on March 22. He went to a hospital on March 25. The details of his work were not revealed Taweesilp Visanuyothin, spokesman for the Health Department said..

The other deceased Thai man was a 30-year-old worker who lived in Phatthalung and worked in Surin. He died at Prasat Hospital in Prasat district of Surin on Saturday.

The foreigner was a 82-year-old Swiss man who had attended a party in Hua Hin and also visited entertainment venues in Bangkok.

Meanwhile, of the 102 new Covid-19 Coronavirus cases 10 of them were recorded on the holiday Island of Phuket. The new cases raised the total infections on the island to 119 cases.

The 10 new Covid-19 Coronavirus cases are:

– A 40-year-old Swedish male tourist who arrived in Thailand with his wife on March 13. He was confirmed infected with Covid-19 on April 1. He had visited entertainment places in Soi Bangla in Patong area, Kathu district.

– A Thai woman, 29, a housekeeper. She is the wife of an Italian, the 41st Covid-19 infection, who worked at an entertainment venue in Soi Bangla in Patong. She fell sick on April 2.

– A Thai woman, 55, a housekeeper, wife of the 94th confirmed Covid-19 case. She had not developed any symptoms.

– A 23-year-old Thai female restaurant worker. She was close to the 92nd case. She became sick on March 29.

– A Thai man, 27, a welder in Bang Thao area in Thalang district. He is a son of the 94th confirmed Covid-19 case. He had not developed any symptoms.

– A Thai woman, 32, who runs a grocery store in Bang Thao area in Thalang district. She is a daughter of the 94th case. She fell sick on March 30.

– A Thai woman, 28, a housekeeper and daughter-in-law of the 94th case. She had not developed any symptoms.

– A Thai woman, 74, a grocer in the Bang Thao area of Thalang district. She is the mother-in-law of the 94th case. She fell sick on April 3.

Five of the 10 new cases are related to the 94th case. They all lived together in the same house as a family.

All 10 of them had been quarantined before being confirmed infected with the virus.

All 152 Thai people who refused to go into state quarantine and went home instead after returning to the country on Friday have reported to the authorities as requested, police said on Saturday.

Of the 152, 104 reported to the Emergency Operation Centre (EOC) at Suvarnabhumi airport and 48 others at the Damrongtham Centre in their home provinces, said assistant police chief Piya Uthayo, who is also the police spokesman.