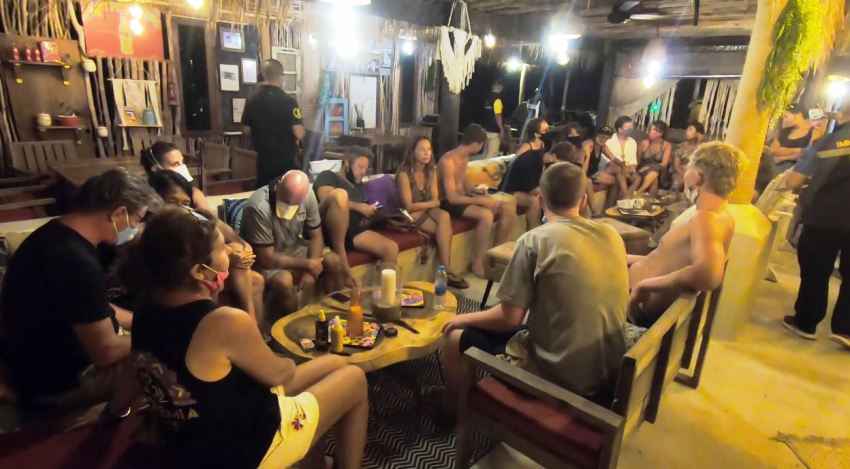 Tourist Police on the Island of Koh Samui in Southern Thailand have arrested, 22 foreign tourists for violating the emergency decree. The 24 people in total were arrested at a beer bar on Koh Samui island.

Acting on a complaint filed by local residents, police raided the La Bohemia bar and restaurant. There were 22 foreign tourists and two Thai nationals on the premises. Many were dancing to music and drinking Thai Media reported.

Quentin Thioliet, 24, a French National, identified himself as the bar owner. He had three Burmese working with him as waiters, only one had a work permit. The bar was also operating without a proper license.

The bar owner, his employees and all customers were charged with breaking the emergency decree. The State of Emergency decree prohibits restaurants selling alcohol. Furthermore gatherings are also banned to prevent the spread of Covid-19.

Thai tourism authorities report that about 10,000 foreign tourists have been stranded on three islands in Southern Thailand. The tourists were stranded after Thailand’s state of Emergency lockdown.

About 5,700 tourists on the Island of Koh Samui, were trapped when flights were suspended due to pandemic.

Tikamporn Sutti-udomrat, tourism and sports chief of Surat Thani, said on that there are also 3,300 foreign tourists on Koh Phangan and also another 1,000 on Koh Tao.

“They have accommodation, travel and growing expense problems. I have sought help from the Tourism and Sports Ministry,” he said. Mr Tikamporn has also asked hoteliers to let the foreigners stay until they can leave Surat Thani.

His office arranged for accommodation for the foreign tourists who had urgent problems but they would have to pass health screenings, he said.