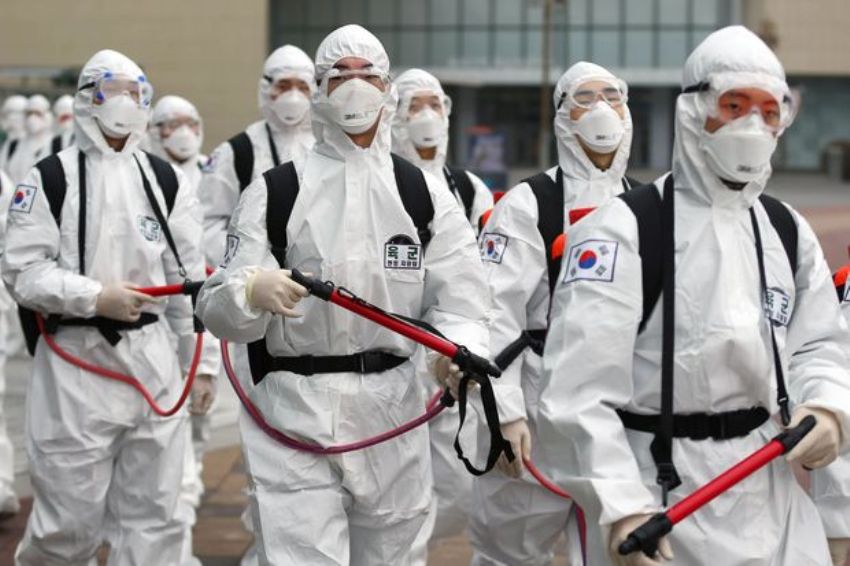 South Korean President Moon Jae-in said Sunday the government was waging “all-out war” to contain the novel coronavirus. This comes as the country added 586 more cases, taking the total to 3,736.

Scores of events have been cancelled or postponed over the Coronavirus outbreak. The country’s central bank has warned of negative growth in the first quarter for the world’s 12th-largest economy. Also noting the epidemic will hit both consumption and exports.

“The government is now waging all-out was on the coronavirus after raising the crisis alert to the highest level.” Moon said at an Independence Movement Day ceremony, scaled down due to the outbreak.

“We will be able to overcome the COVID-19 outbreak and revive our shrunken economy,” he added.

Samsung Electronics suspended operations at its domestic smartphone plant in Gumi on Saturday. The second time in a week, after a third employee tested positive for the virus.

Hyundai Motor also stopped operations at one of its plants after an employee tested positive for the coronavirus.

Concerts by K-pop superstars BTS and the World Team Table Tennis Championships were also among cancelled events. While sports leagues have modified their seasons to contain the virus.

K-pop star CHUNG HA was placed in self-quarantine after a member of her staff tested positive last month. The singer tested negative.

Nearly 90% of the cases were in Daegu, South Korea the centre of the country’s outbreak. Also neighbouring North Gyeongsang province, the Korea Centers for Disease Control and Prevention said in a statement.

The country reported one more death Sunday, taking the total death toll to 18.

South Korea has an advanced health system and a free media, factors observers say improve the reliability of its statistics. With the numbers expected to rise as it checks more than 260,000 people associated with the Shincheonji Church of Jesus.

A 61-year-old female member developed a fever on February 10, but attended at least four church services in Daegu. The country’s fourth-largest city with a population of 2.5 million, before being diagnosed.

Around 60% of the cases were linked to the entity, Reuters reports.

“Until now, the COVID-19 Coronavirus outbreak in the country has been excessively led by a specific group,” said KCDC vice director Kwon Jun-wook.

Shincheonji apologized Sunday on behalf of its members who had kept their religion secret. Adding: “It will be hard for our devotees to reveal their identity when political leaders… are recklessly criticizing Shincheonji as the epicentre.”

Daegu has also filed a police complaint against the local branch of the sect for submitting an incomplete list of its members. While other provincial governments have warned of taking similar action.

The city’s streets have been largely deserted for days, aside from long queues at the few shops with masks for sale, with authorities urging the public to exercise caution.

“The best way to prevent the COVID-19 is for the citizens to refrain from going outside,” said Daegu mayor Kwon Young-jin.

But officials say they are not considering a citywide quarantine similar to Wuhan’s lock-down, where the virus first emerged.

The new school term start has been delayed one week nationwide and three weeks in Daegu, while the US and South Korean militaries have postponed forthcoming joint exercises.

Leaders in Europe, the Middle East and the Americas rolled out bans on big gatherings. Even more stricter travel restrictions as cases of the new coronavirus spread around the world.

The epidemic, which began in China, has killed almost 3,000 people worldwide.

Thailand reported its first death from the virus on Sunday. While in Australia, a former passenger on the Diamond Princess cruise ship quarantined off Japan died in the western city of Perth.