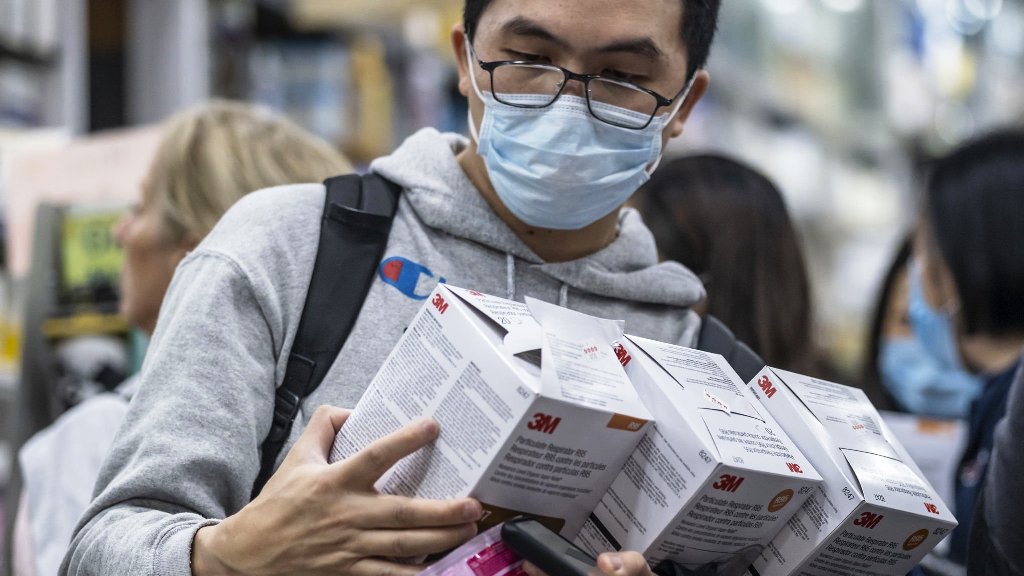 Face mask manufacturers in China are reopening factories shut for the Lunar New Year holiday, as consumers emptied out stock in stores. Chinese people are racing to buy face masks to protect themselves from the new coronavirus.

Manufacturers are promising workers up to four times their normal wages as consumers emptied out stock in stores.

“From what I have heard, the mask shortage is much, much more severe than what the public knows,” said Cao Jun, general manager of mask manufacturer Lanhine. Which has a factory in east China’s Ningbo city.

“Almost all hospital workers nationwide are facing a huge shortage of masks, not just in Wuhan.”

Cao said the firm’s clients were demanding a combined 200 million masks per day. Its normal production rate is 400,000 face masks a day. CMmask, in eastern China told Reuters it was offering workers triple their wages to come back to work.

Our factory is out of stock now, said Hu Qinghui, CMmask’s deputy general manager. We have now extended our working hours to produce more face masks, he said. People are in fear of the coronavirus spreading as hundreds of millions of Chinese travel during the week-long Lunar New Year holiday.

Worried about the potential for a global pandemic, China put Wuhan, the epicentre of the outbreak, a city of 11 million, on lock-down earlier this week. The decision was praised by the World Health Organisation.

China has now expanded its lockdown against the deadly new virus to an unprecedented 36 million people.

The number of confirmed cases of coronavirus around the world has climbed sharply. More than 1,287, cases of infection with at least 41 deaths reported from China.

Public transportation was shut down in Wuhan the epicentre of the outbreak. Furthermore China has shutdown 12 other cities in central China’s Hubei province. Encompassing a population bigger than that of New York, London, Paris and Moscow combined.

Hospitals in Wuhan have grappled with a flood of patients and a lack of supplies. Videos circulating online showed throngs of frantic people in masks lined up for examinations.  Many complaining their family members were turned away at hospitals that were at capacity.

“I don’t think this virus has been properly controlled,” a woman in Beijing told Al Jazeera. “I am very afraid of getting infected.”

Wuhan authorities said they are rapidly constructing a new hospital to deal with the crisis, to be completed by February 3, according to Al Jazeera.

The seriousness of the crisis an open question

It was not clear just how lethal the virus is, or even whether it is as dangerous as ordinary flu. Which kills tens of thousands of people every year in the US alone. Scientists say it is not clear if it spreads as easily as SARS, its genetic cousin. Which also originated in China with the government’s initially covering up SARS.

Many Chinese are suspicious of the case numbers reported by officials. Authorities have promised transparency.

The fear of a coverup was also recently expressed in an article in the Washington examiner.  Mad Money host Jim Cramer suggests China might be covering up the truth about the “rapidly spreading” coronavirus.

“Why did the mainstream media fall in love with the Chinese again? And think they are telling the truth about this illness?” Cramer posted on Twitter.

When one user asked Cramer which media outlets he was referring to, Cramer replied: “the ones who don’t say that China has a history of lying.” The market analyst also agreed with another Twitter user who tweeted, “Communist China has been exploiting the habitual mutual trust of western people to manipulate public opinions.”

Videos have also circulated on Twitter that purports to show Chinese citizens falling over and bleeding from the mouth. Reports of doctors treating victims while wearing hazmat suits have also been posted on the internet.

The UK’s Daily Mail also reports corpses of coronavirus victims are being left unattended in corridors of a hospitals flooded with patients in Wuhan. The video shows a chilling scene, captured by a woman who also claimed to be a nurse. The video was posted on the country’s social media network today but quickly censored.

The medical worker described how patients were being sent in non-stop without any quarantine measures. Warning that ‘everyone will end up being infected and dying’.

The now-removed video was shared onto Weibo, the Chinese equivalent to Twitter,  by a user known as ‘magic girl Xiao Xi‘. It was believed to be filmed at the Wuhan Red Cross Hospital. One of the facilities appointed by the government to receive coronavirus patients.

Meanwhile, about two dozen cases in all have been confirmed outside mainland China. Most of them in Asia Hong Kong, Macao, South Korea, Japan, Singapore, Thailand, Taiwan and Vietnam.

Many countries are also screening travellers from China and isolating anyone with symptoms.

Furthermore Chinese officials have not said how long the shutdowns of the cities will last.