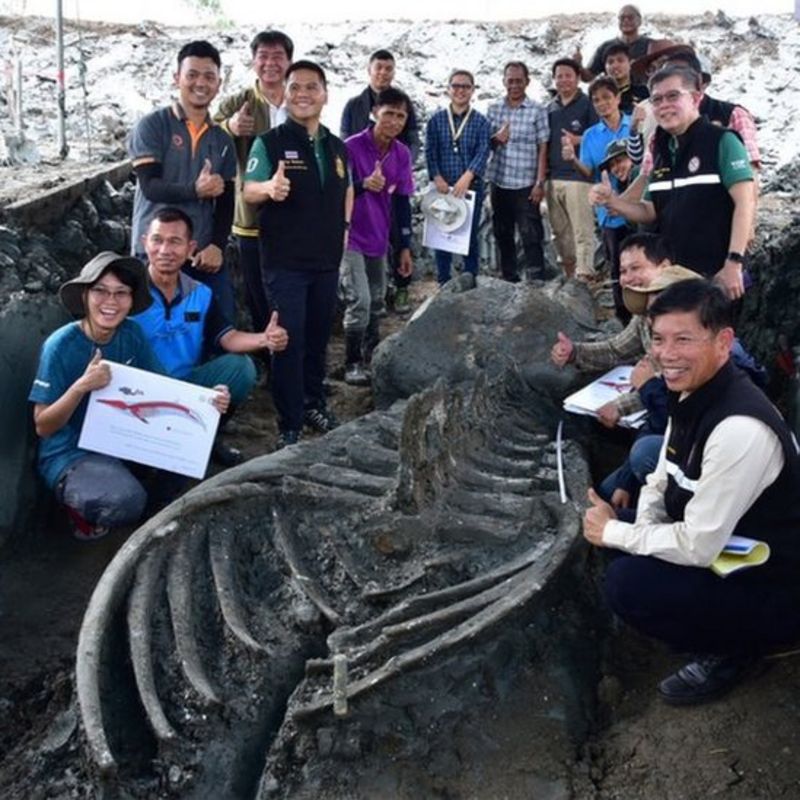 A whale skeleton thought to be up to 5,000 years old has been discovered, almost perfectly preserved, by researchers in Samut Sakhon, Thailand. Scientists believe the whale  skeleton is of a Bryde’s whale.

Researchers have excavated 80% of the remains and have so far identified 19 complete vertebrae, five ribs, a shoulder blade and fins. The skeleton measures 12 metres (39ft), with a skull that is 3 metres long.

The bones will be carbon dated to verify their age, but it is thought they are between 3,000 and 5,000 years old.

Bryde’s whales are still found in Thailand’s waters, where they are considered a protected species. The whales – which prefer waters above 16C (61F), and feed on schooling fish such as anchovies – face threats from fishing equipment as well as tourism.

The remains, which were found about 12km (7.5 miles) inland, will help scientists understand the evolution of the species, and track how sea levels have changed over thousands of years, said Varawut Silpa-archa, the natural resources and environment minister.

Understanding of the Bryde’s whale Marcus Chua, of the National University of Singapore, said the discovery adds to evidence of “relatively large sea level changes around 6,000 years to 3,000 years ago in the Gulf of Thailand. Where the shoreline was up to tens of kilometres inland of the present coast”.

Previously, only marine deposits containing small fossilized marine shells or crabs had been found inland, and it was not clear if those fossils had been moved by humans, said Chua. “A large sub-fossil whale dated thousands of years ago near Bangkok would provide strong evidence of where the sea was during that time,” he said.

Such evidence is highly relevant, given that the climate crisis is contributing to rising sea levels. “This could certainly bring attention to the issue, and show how and where low-lying areas could be inundated by the sea when that happens,” said Chua. The discovery will also help deepen researchers’ understanding of the Bryde’s whale, as well as other marine life. Alongside the skeleton, researchers found preserved items including shark teeth and shells.

“Scientists could also study the deposits found at the same level as the whale to reconstruct the biological communities present during that time, and compare them to present day systems,” said Chua.

The exact age of the skeleton is expected to be confirmed in December.

How to Enhance Your Experience Playing at a Real Money Casino