Thailand Goes on Offensive Over Monkeys and the Coconut Industry
Advertisement 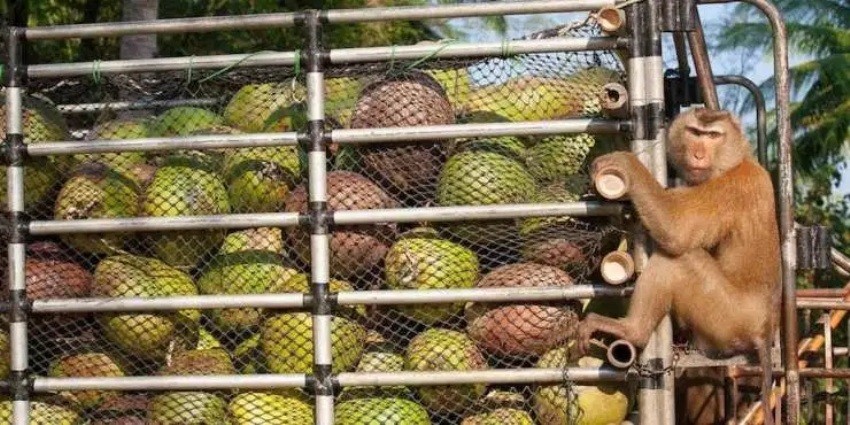 The Foreign Ministry has gone on the defensive against PETA as the animal rights group tries to cancel culture Thailand’s coconut Industry. The foreign ministry is urging Thai diplomats to explain to foreign importers and retailers that Thailand does not use monkeys to harvest coconuts on an industrial scale.

Ministry spokesman Cherdkiat Atthakor said Thai embassies and consulates must urgently clarify the “falsehoods” alleged in the People for the Ethical Treatment of Animals (PETA)’s report on Thailand’s use of monkeys to collect coconuts.

The ministry instructed Thai embassies and consulates to work with international trade promotion offices to closely monitor the situation, said Mr Cherdkiat, also director-general of the Department of Information.

The Thai embassy in Stockholm has issued a press release to deny Peta’s allegation against Thailand. Stating that using monkeys to collect coconuts is a local tradition. Furthermore there is no monkey labour in the wider export industry.

The Thai international trade promotion office in London has sent a letter to every large retailer in the UK to deny Peta’s report. It also plans to meet with the large retailers and importers to further clarify the matter.

The Thai embassy in Berlin said it was also closely monitoring reports that some shopping malls in Germany will ban coconut milk from Thailand as of October of this year.

The Thai Food Processors’ Association said at a meeting with the commerce minister that Theppadungporn Coconut and Thai Agri Foods — two Thai coconut milk exporters accused in Peta’s report — don’t even use monkeys to pick coconuts on an industrial scale. They have also signed a memorandum of understanding with importers and distributors of Thai products in foreign countries to certify this.

The private sector will also adopt a traceability system to track Thai coconuts from farms to buyers, the association said.

Monkey Trainer Speaks Out Against PETA

A monkey trainer in Thailand has spoken out against Animal Rights Group PETA saying very few monkeys are involved in harvesting coconuts for export. She is disputing claims of abuse by the animal rights group.

Earlier this month, some British retailers pulled Thai coconut products from their shelves after a report by People for Ethical Treatment of Animals (Peta) alleged that coconuts in Thailand were picked by abused monkeys.

Peta in an unsubstantiated statement said that “virtually all” coconuts from Thailand were picked by monkeys.

Somjai Saekhow daughter of Somporn Saekhow, one of the most famous monkey trainers in Thailand say this is a fabrication. Somjai trains monkeys to fetch coconuts at a “monkey school” in Surat Thani province.

She, says most coconuts used for export are harvested by humans with poles because the trees were shorter.

There are 80 different types of coconuts. In Thailand there are two very well-known ones. The tall 30 meter tree, produces the brown, ripe coconuts. These is also the most widely use shorter 5 meter coconut tree.

Only a few farms in the South use monkeys for older, taller types of coconut trees, she said.

Somjai also wanted to address PETA’s accusation of animal abuse, saying its not true. The monkeys we have are clearly happy when they are chosen to be trained. They like the attention, and they enjoy working.

There is absolutely no violence or coercion involved. The many monkey owners we know all work very quietly with their monkeys. Animal cruelty is also prohibited by law in Thailand, Somjai said.

Somjai said about three years ago we suddenly received a lot of hate emails, most from the US. A large number of them we trace back to people who are also active within PETA.

She said the country’s 200,000 coconut growers overwhelmingly use human labour and machines for harvesting.

“Even all the monkeys in the entire forest wouldn’t be enough for the industry. Because we export hundreds of thousands of coconuts (each year),” she said.

Thailand does not use monkeys to harvest coconuts on an industrial scale for its export industry, Commerce Minister Jurin Laksanawisit said this week.

Product makers have reached an agreement with the government to voluntarily set up a system to allow products to be traced to ensure they aren’t made from produce picked by monkeys, he added.