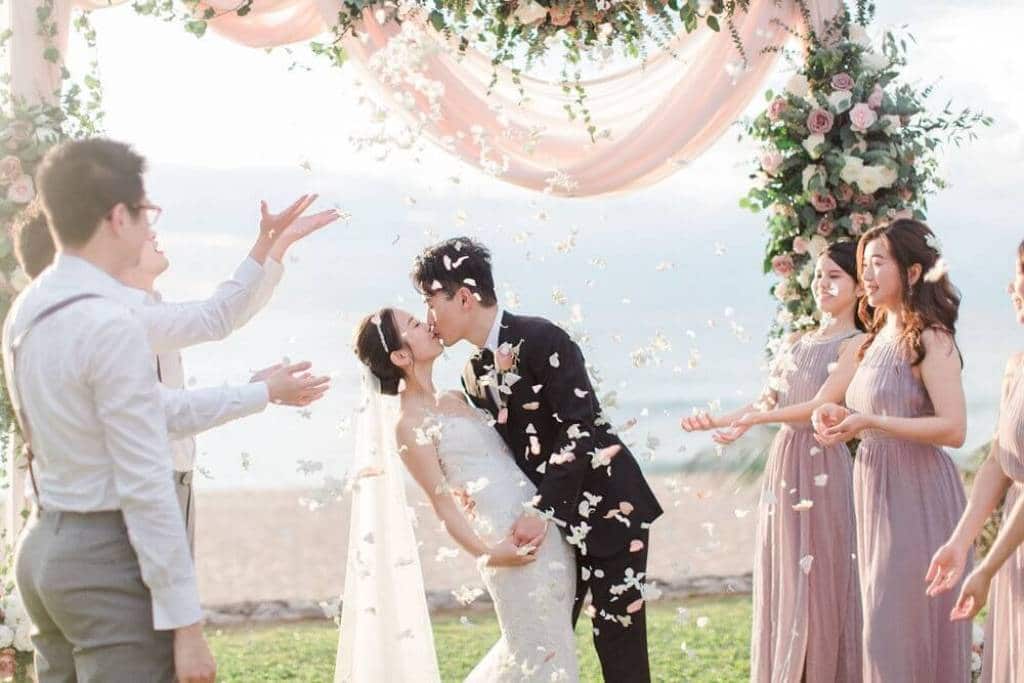 Couples are racing to the altar in a post pandemic vaccination-era wedding boom that has Las Vegas wedding venues and other venues in high demand according to luxury wedding planners.

“We’ve run out of trucks for some dates this year and that hasn’t happened before,” said Ben Goldberg, co-founder and president of the New York Food Truck Association told AP. “Our phones have been ringing off the hook with clients looking to have the weddings they had to put off during COVID.”

Also contributing to the rush are couples who went ahead and got hitched during stricter pandemic times with few or no guests and are now on their second go-arounds with larger groups. They’re competing for services with those who had always intended to marry this year.

“We’re seeing a lot of last-minute bookings with shorter planning windows,” said Anna Noriega, who owns the luxury Alorè Event Firm in Miami. “With vaccinations becoming more prevalent and on-site COVID testing available for events, we’ve seen an up rise in guest counts and a push for bookings.”

Namisha Balagopal, 27, in Emeryville, California, is among the double brides.

She and Suhaas Prasad, 33, met in 2014 and got engaged in May 2019. They planned a traditional South Asian Indian wedding last August in Utah, where Balagopal grew up, with 320 guests and events over five days. But they couldn’t make it happen under pandemic restrictions so we hired a luxury wedding planner to help us.

They decided on a small sunset ceremony that month with fewer than 10 people in attendance on Muir Beach near San Francisco. It’s where they had their first date and where Prasad proposed.

Now, their big celebration is on for Aug. 15 outdoors at their original venue in Park City, Utah, with about 230 guests and events over several days, including seven clothing changes for bride and groom. Many of their closest loved ones in India aren’t permitted to travel to the U.S.

“It’s just a really big part of our culture,” Balagopal said of the extravaganza. “In the end, it was really important to our parents.”

She’s mostly beyond the frustration phase of being a pandemic bride.

“The wedding is going to be so much fun. It’s just delayed gratification at this point,” Balagopal smiled.

The boom is on in bridal and bridesmaids dresses, too.

The budget-friendly David’s Bridal chain, with 282 stores in the U.S. and more in the UK, Canada and Mexico, has 300,000 dresses in stock due in part to the wedding drought of 2020.

“Moving forward it’s going to be an unprecedented wedding season this year,” said Maggie Lord, a vice president at David’s whose online wedding planning guide, Rustic Wedding Chic, was acquired by the company. David’s has been tracking broad wedding data through the pandemic.

“Couples are getting super creative and having Thursday night ceremonies or Friday afternoon ceremonies just because of the amount of people getting married this year,” Lord said. “We do know that 90 percent of brides this year are looking to have their weddings at outdoor venues,” where there are fewer restrictions.

Competition for vendors has some upping their prices. “They know they have customers who will pay it,” she said. “Wedding vendors are making up for a year of limited if no work at all.”

“They’re trying to meet the demand of new clients and clients who have postponed,” she said. “In order to do so, in many cases, they’re having to charge more. They’re having to hire additional resources, bring staff members back. Also the cost of goods is increasing. There are only so many linens, only so many rentals and only so many flowers that were planted this past season.”

One thing’s for sure, Lord said: Brides and grooms are “bringing back the big wedding, with guest lists that are a little bit more curated and maybe not 300 people on a crowded dance floor.”

Tirusha Dave is the owner and CEO of the upscale wedding planning company Bravura Brides used by Balagopal. She handled 10 weddings in 2019, with just three in 2020. Dave already has 11 weddings booked this year with 250 to 300 guests planned at each.

“I think everybody’s ready for things to bounce back, but just in a safe way,” she said.

Lord’s online planning applications site has far more vendors with bookings two years out, rather than the more traditional 12-month planning period as couples hold out for venues they want and seek to distance their special days from the pandemic altogether.

Justin Warshaw is the creative director and CEO of the global Justin Alexander Group, a bridal design and manufacturing house with five core brands and more under licensing and white-labeling arrangements.

He’s seen wedding dress bookings increase by 593% from April 1-May 15 2020 compared to the same period this year. Eighty-eight percent of his 2,200 retailers in 80 countries are now open and operating, with the U.S. his largest market.

“A lot of that has to to do with pent-up demand and also what we envisioned would happen: So many COVID couples turning into COVID engagements, turning into weddings,” said Warshaw, who’s among the newly engaged. “With the optimism from vaccinations, people want to celebrate with family and friends, and get on with their lives.”

Chappall Gage, who with his mother runs Susan Gage Caterers in Washington, D.C., has seen a boom in special events overall, with 30% to 40% of their weekend business in weddings.

“It’s the one big event that’s coming back quickly,” he said. “Right now we’re at this transition point where micro-weddings are ending and now people are starting to get comfortable doing larger weddings. When the mayor announced she was allowing dancing at weddings I could hear an audible cheer from the city.”