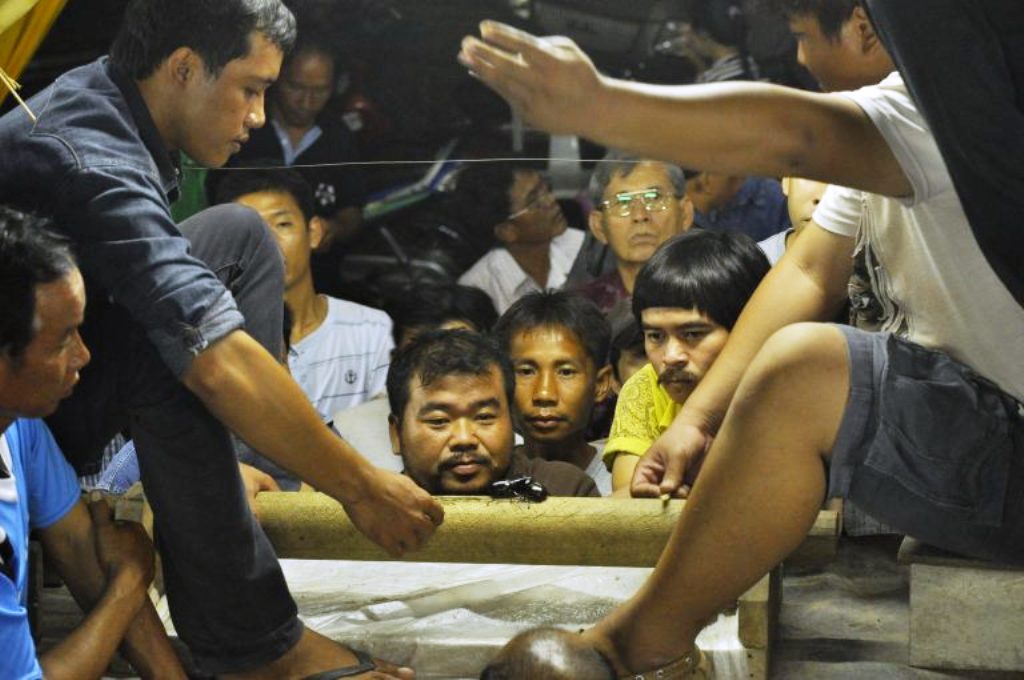 As the cooler weather arrives in Chiang Rai in Northern Thailand, boys and men gather for the final rounds of Rhino beetle battles. The Rhinoceros Beetle fighting season begins with the onset of wet weather and rages on until early winter.

Then farmers return to their paddies to harvest their crops, according to the website of the Department of National Parks, Wildlife and Plant Conservation.

The beetle competitions have been annual events in several northern provinces for decades, and are particularly popular in Chiang Rai, Chiang Mai and Lampang.

The Rhinoceros Beetle, known as “Kwang” in the northern dialect, has several subspecies; Kwangsong is so renowned for its fighting spirit and physical strength.

Beetle Fight on a Wooden Stage The Rhinoceros Beetle has also been adopted as the nickname for Chiang Rai United football club. In Pua district, Nan province, the tradition of beetle fighting is still strong. Legend has it that years ago, men found the black, shiny beetles deulling in the bamboo forests.

Impressed with their bravery, the villagers brought the bugs back to found a new sport. The beetles are sorted by size and assigned to an opponent on a wooden stage known as a Gon.

What the male beetles are fighting for, naturally enough, is a female — who is placed just underneath the stage where the opponents can smell her. The two male beetles then lock horns, and continue their struggle until one backs down.

Although beetle fighting is chiefly a hobby, gambling becomes inevitable once an audience gathers. Stakes can reach as high as 100,000 baht.

Sawang Sri-uan, 45, a Chiang Rai native who received 6,600 baht from matches held in Chiang San district, said he was very happy with his champion’s performance.  Mr Sawang said his beetle overcame opponents by attacking their lower legs until they slunk back in shame.

“I came here with a small group of friends who love the beetles. We brought around two or three beetles today and most of them were very strong,” he said.

But not all owners regard their bugs as cash cows. For some, it’s an exhibition of skills. 26-year-old Theerayuth Sutha, from Pan district in Chiang Rai, said he first played with fighting beetles when he was five years old as his father was an aficionado.

He said it was fun to watch the battles and roar encouragement. “They are natural fighters, Mr Theerayuth said, adding he enjoyed training his warriors for the event, even though one of them was knocked out in the first round.

As the life circle of the beetle runs around three months starting from September, beetle lovers like Banjong Jinasam, a Chiang Rai native, decided to breed them on their farms. Mr Banjong said both beetle breeding and fighting were well worth preserving. – Bangkok Post

Growing Your Own Medical Cannabis: A Beginner’s Guide