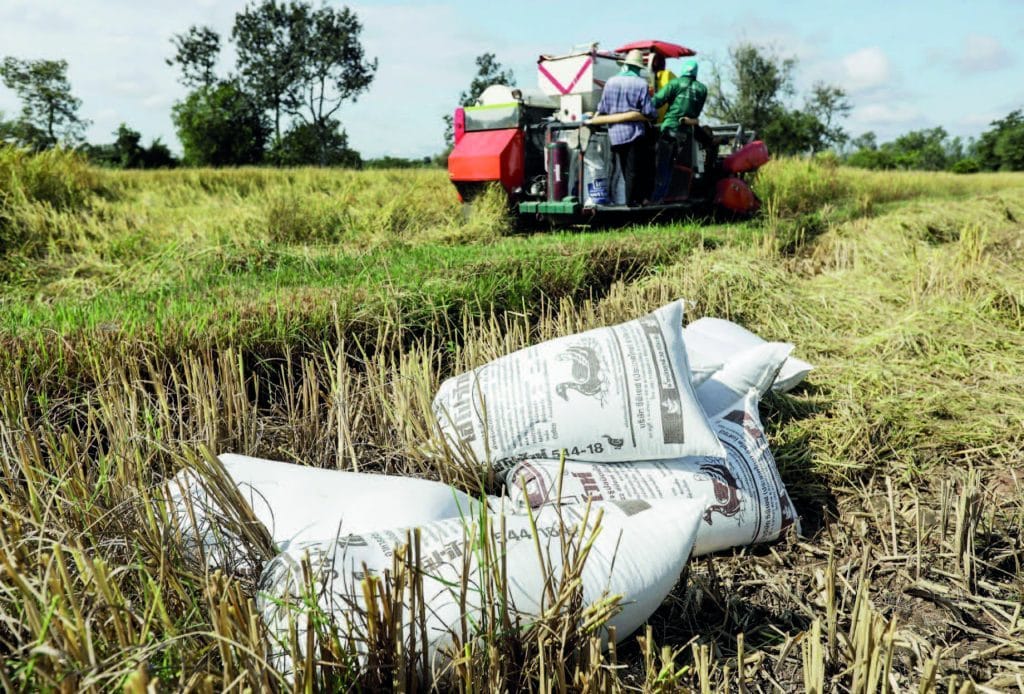 The Thai government government is stepping up efforts to regain that position of the world’s biggest rice exporter by lowering export surcharges and improving rice breeds. Thailand’s rice exports have been at a 23-year lows due to the extreme drought, the high baht, and higher shipping charges.

At a cabinet meeting, the government affirmed a plan to lower surcharges it collects from exporters for rice exports to the European Union and Britain from 2,500 baht ($80.51) per ton to 1,200 to 1,500 baht.

The government of Thailand decided to prop up rice exports after they shrank 25% in 2020 from the previous year to 5.7 million tons, according to the U.S. Department of Agriculture. The volume of exports was the lowest since 1997, when Thai society was thrown into confusion because of the Asian financial crisis.

Thailand thus fell to being the third-largest rice exporter in 2020, surpassed by Vietnam, which exported 6.16 million tons.

Furthermore weakened price competitiveness is one reason for the fall in Thailand’s position as a rice exporter. Exports of Thai rice were priced at $542 per ton in February, losing to those of Indian and Vietnamese rice, which were quoted at $393 and $520, respectively.

Rice production in Thailand contracted because of droughts hitting its rice-producing region in 2019 and 2020. The appreciation of the baht and steep rises in freight charges for container vessels dealt additional blows to rice exports.

The baht has stayed high in value as a “safe currency” amid the COVID-19 pandemic, weakening the price competitiveness of Thai rice. In addition, the global shortage of container ships has boosted transportation costs for exports.

Tough conditions are expected to continue for rice exports from Thailand. Chookiat Ophaswongse, honorary president of the Thai Rice Exporters Association (TREA), told a local newspaper that exports in 2021 are forecast to decrease from the previous year to 4.5 million to 5.0 million tons.

Thailand used to be the world’s biggest rice exporter but fell behind India and Vietnam allegedly because of a program introduced in 2011 by then-Prime Minister Yingluck Shinawatra to take farmers’ rice as mortgage in exchange for loans. The program to buy rice at prices higher than market prices in effect continued until the Yingluck administration was topped in 2014 in a coup.

The quality of Thai rice dropped because farmers indulged in the government’s generous protection policy. As emerging neighboring countries began to produce high-quality rice, Thailand lagged behind in the competition to improve breeds and lost its export competitiveness, falling from its position as the world’s biggest rice exporter in 2012.

The government is accelerating its comeback efforts. To promote the development of high-quality breeds, the Ministry of Agriculture and Cooperatives and the TREA are planning a contest on new rice breeds for export.

The Ministry of Commerce has set a target of increasing rice exports in 2021 by 5% from the previous year to 6 million tons to pave the way for Thailand to regain the position as the top exporter by recovering the costs of the failed policy. But competition with rival countries is expected to get tougher.