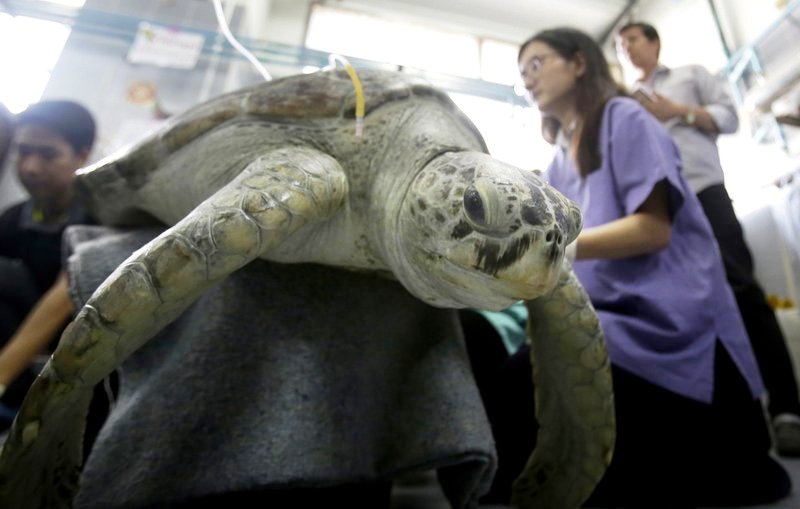 A 25-year-old green sea turtle named “Bank” has recovered from a life-saving operation to remove 915 coins from her stomach. Bank the green sea turtle flapped her flippers with vigor in her first swim after the operation.

Head of Chulalongkorn University’s veterinary medical aquatic animal research center Dr. Nantarika Chansue said the 25-year-old turtle was rescued from a pool in the seaside town of Sri Racha by the Thai navy.

The cause of her ill health was revealed by 3D scans. The 3d scans showed she had been eating the coins thrown into her pool by people believed doing so would bring them good luck. Over the years, the loose change got stuck in the turtle’s digestive tract and stomach. Cracking her ventral shell and causing a life-threatening infection.

The surgeons took four hours to remove  915 coins of various currencies from her stomach. Some are still inside her and veterinarians hope Bank will pass them naturally. Her rehabilitation has involved manipulating her limbs to make sure the muscles don’t stiffen up. Above all after being out of water for a prolonged period.

Veterinarians are also checking that her surgical scar does not get infected. But there are lingering concerns for the 25-year-old green sea turtle. “The wound healing seems to be OK and there is no secondary infection because we are using sterile seawater,” said Dr. Nantarika, “but we have checked her blood and her nickel concentration is very high so we have to work on that.”

“It’s fantastic! She is responding very well, now she is very happy and looks like normal turtle.”

Tips to Stay Safe When Buying for Groceries During COVID-19