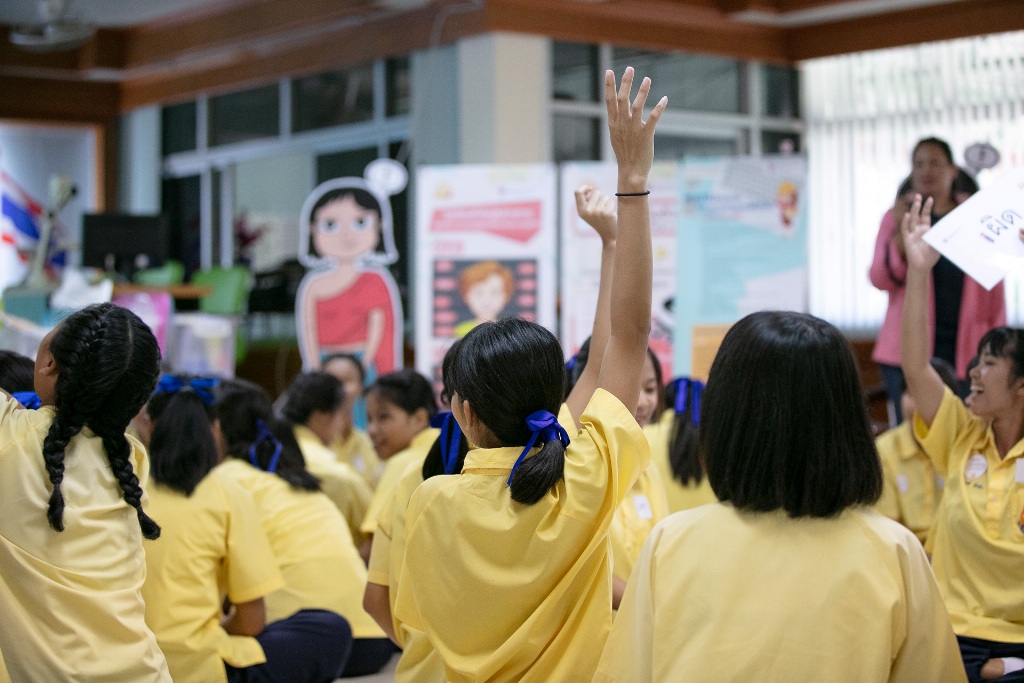 Thai Health Promotion Foundation has found Thai girls are entering puberty at an increasingly early age with the average age now being 11 years old and the youngest cases at 7 years old. Physicians believe this poses a risks to their growth and health as well as the possibility for unwanted pregnancy.

The foundation recently completed a study into puberty among Thai youth and its effects on the mind and body.

A representative of the College of Population Studies from Chulalongkorn University reported that the study found Thai children were entering into puberty at a progressively earlier age than before. Out of 8,000 children studied, menstruation among female subjects began as early as 7 years of age with the latest at 16.

The average age was 11 years. The early onset of puberty resulted in a stunting of growth with many of the girls not reaching their optimal genetic height and others ceasing to grow at the age of 13. Physicians involved in the study noted that earlier development of breasts among children could also put them at greater risk of breast cancer.

They also pointed out the risk of emotional trauma, as the fast development made many of the children feel isolated. In some cases, the girls also became victims of sexual molestation. The adolescent girls were unequipped to safeguard themselves from predators. A lack of sexual knowledge also led some to becoming teenage mothers.

Director of the foundation’s Youth and Family Health Support Office Nattaya Boonpakdee, says the trend is due to genetic and behavioral changes. Also the consumption of processed foods and supplements and the use of cosmetic pharmaceuticals.

It is hoped the findings will lead to policies relevant to child health as well as a push against sexual predation and teen pregnancy. Meanwhile, a new study in the United Sates released by the medical journal, Pediatrics, reveals a surprisingly big bump in the numbers of girls going through puberty between the ages of seven and eight. In a study of 1,200 seven-year-old girls, 10 percent of Caucasians had some breast development as compared to 5 percent in a study published back in 1997. Worse, a whopping 23 percent of African American girls had started puberty as compared to 15 percent back in the 1997 study. And our eight-year-olds?

The numbers are staggering. Eighteen percent of Caucasian girls and 43 percent of African American girls had reached early puberty, up from 11 percent for both groups.

Dr. Stanley Korneman, an endocrinologist at the University of California, Los Angeles says that environmental exposure to estrogens in plastics, chemicals and foods has been going up and that estrogens stimulate breast development. And he says that could be the link to early onset of puberty. Makes sense.

What is really going on here? I can just imagine that the smoky back rooms in Washington where meat, dairy and poultry lobbyists make their dirty little deals and hide the real facts about what is in our food are in hyper-drive. The information in this study, if people connect the dots, could blow up in their faces, and who could afford that?

Not the politicians on both sides of the aisle and certainly not their clients, those pirates who peddle hormone, antibiotic and steroid-laced food to our children. And we wonder why little girls look like very big girls far before their time.

Over consumption of processed food The solution to this problem is easy and obvious. Our children are being destroyed in the name of profit by big industry and factory farms who feed their animals steroids, growth hormones and antibiotics to make them fatter, faster.

While the childhood obesity problem is linked to the over consumption of processed food, drive-through, dinner in a bucket and the sheer volume of sugar and other junk our kids are eating, we must also look at the role growth hormones play in the size of our kids and the age they reach puberty.

According to Cornell, the declining age in puberty’s link to hormones in meat and dairy has been of concern to experts for some time now because of the possible links to breast cancer.