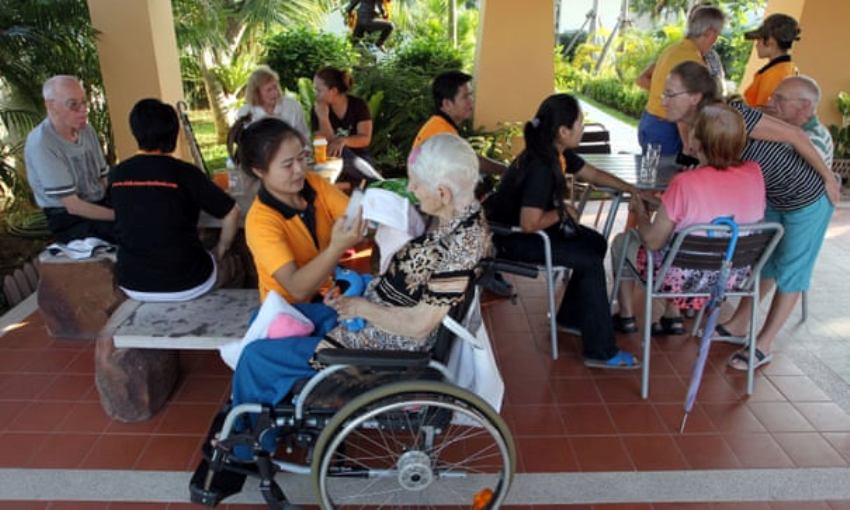 Residents of this facility for people with Alzheimer’s disease toss around a yellow ball and laugh under a cascade of water with their caregivers, in a swimming pool ringed by palm trees and wind chimes. Susanna Kuratli, once a painter of delicate oils, swims a lap and smiles.

Watching is her husband, Ulrich, who has a heart-rending decision: to leave his wife of 41 years in this facility 9,000 kilometres from home, or to bring her back to Switzerland.

Their homeland treats the elderly as well as any nation on earth, but Ulrich Kuratli says the care here in northern Thailand is not only less expensive but more personal. In Switzerland, “You have a cold, old lady who gives you pills and tells you to go to bed,” he says.

Kuratli and his three grown children have given themselves six months to decide while the retired software developer lives alongside his 65-year-old wife in Baan Kamlangchay — “Home for Care from the Heart.” Patients live in individual houses within a Thai community, are taken to local markets, temples and restaurants, each with three caretakers working in rotation to provide personal around-the-clock care. The monthly $3,800 cost is a third of what basic institutional care would come to in Switzerland.

Kuratli is not yet sure how he will care for Susanna, who used to produce a popular annual calendar of her paintings. But he’s leaning toward keeping her in Thailand, possibly for the rest of her life.

“Sometimes I am jealous. My wife won’t take my hand but when her Thai carer takes it, she is calm. She seems to be happy,” he says. “When she sees me she starts to cry. Maybe she remembers how we were and understands, but can no longer find the words.”

Spouses and relatives in Western nations are increasingly confronting Kuratli’s dilemma as the number of Alzheimer’s patients and costs rise, and the supply of qualified nurses and facilities struggles to keep up. Faraway countries are offering cheaper, and to some minds better, care for those suffering from the irreversible loss of memory.

The nascent trend is unnerving to some experts who say uprooting people with Alzheimer’s will add to their sense of displacement and anxiety, though others say quality of care is more important than location. There’s also some general uneasiness over the idea of sending ailing elderly people abroad: The German press has branded it “gerontological colonialism.”

Germany is already sending several thousand sufferers, as well as the aged and otherwise ill, to Eastern Europe, Spain, Greece and Ukraine. Patients are even moving from Switzerland, which was ranked No. 1 in health care for the elderly this year in an index compiled by the elderly advocacy group HelpAge International and the UN Population Fund.

Facilities in Thailand also are preparing to attract more Alzheimer’s sufferers. In Chiang Mai, a pleasant city ringed by mountains, Baan Kamlangchay will be followed by a $10-million, holidaylike home scheduled to open before mid-2014. Also on the way is a small Alzheimer’s unit within a retirement community set on the grounds of a former four-star resort. With Thailand seeking to strengthen its already leading position as a medical tourism and retirement destination, similar projects are likely.

The number of people over 60 worldwide is set to more than triple between 2000 and 2050 to 2 billion, according to the World Health Organization. And more are opting for retirement in lower-cost countries.

“Medical tourism” has become a booming industry, with roughly 8 million people a year seeking treatment abroad, according to the group Patients Without Borders.

The U.K.-based Alzheimer’s Disease International says there are more than 44 million Alzheimer’s patients globally, and the figure is projected to triple to 135 million by 2050. The Alzheimer’s Association estimates that in the U.S. alone, the disease will cost $203 billion this year and soar to $1.2 trillion by 2050.

The pioneering Baan Kamlangchay was established by Martin Woodtli, a Swiss who spent four years in Thailand with the aid group Doctors Without Borders before returning home to care for his mother who had been diagnosed with Alzheimer’s.

Wanting to return to Thailand and knowing that Thais traditionally regard the elderly with great respect, he brought his mother to Chiang Mai, where she became the home’s first “guest.” Woodtli never uses the word “patient.”

Over the next 10 years, the 52-year-old psychologist and social worker purchased or rented eight two-storey houses where 13 Swiss and German patients now reside. Two people normally share the modest but well-kept, fully furnished houses, each sleeping in a separate bedroom along with their caretaker.

Breakfast and lunch are eaten together at another residence where Woodtli, his wife and son live. On most afternoons, the group gathers at a private, walled park to swim, snack and relax on deck chairs. Regular outside activities are organized because he believes these stimuli may help delay degeneration.

Thailand is not the answer for everyone with Alzheimer’s

“Movement is important. Tensions are also relieved if they have freedom to move. Our carers allow our guests a lot of space as long as it does not pose a danger to them,” he says. “In Switzerland we don’t have opportunity for such care.”

He says his guests “cannot explain it, but I think they feel part of a family, a community, and that is very important.”

Yet Woodtli says he has received criticism about “the Swiss starting to export their social problems.”

The German press has recently described shifting the aged and ailing abroad as “grandmother export.”

Sabine Jansen, head of Germany’s Alzheimer Society, says that while some with Alzheimer’s may adjust to an alien place, most find it difficult because they live in a world of earlier memories.

“People with dementia should stay in their familiar environment as long as possible. They are better oriented in their own living places and communities,” she says. “Friends, family members, neighbours can visit them. Also because of language and cultural reasons, it is best for most to stay in their home country.”

Facility being built in the outlying Chiang Mai

Angela Lunde of the U.S.-based Mayo Clinic says that generally the afflicted do better in a familiar environment, but over time, even those with advanced stages of the disease can adjust well. “I think a positive transition has less to do with the move itself and more with the way in which the staff and new environment accommodates the person living with dementia,” she says.

Woodtli agrees that moving to country like Thailand is not the answer for everyone with Alzheimer’s, but those who have travelled widely and are accustomed to change can probably adapt.

“One of our guests sometimes wakes up in the morning and says, ‘Where am I?’ But she would do the same if she was in a care centre in Switzerland,” he says. “And they take their past with them. One guest thinks she is in a schoolhouse at Lake Lucerne.”

Those who end up staying at a facility being built in the outlying Chiang Mai district of Doi Saket will have amenities that would be tough for its European counterparts to match, including a clubhouse with a massage room and beauty parlour, a restaurant, Swiss bakery and pavilions with soaring ceilings and skylights.

“The idea is that this is a resort, not a hospital,” says Marc H. Dumur, a veteran hotelier who will manage the Swiss-owned, 3.5-hectare facility built amid orchards and groves of teak. Going up are 72 patient rooms in six spacious pavilions, plus villas for visiting family members. Around-the-clock care will be provided by a staff of 150, including a Swiss head nurse and at least one licensed Thai nurse for each pavilion.

These patient-to-carer ratios reflect the costs in a developing country like Thailand and the West. A licensed Thai nurse earns less than $700 a month, compared to about $7,000 for one in Switzerland, where care centres will have one nurse responsible for 10 patients.

Care at the Doi Saket home will cost $6,000 a month, roughly what a mid-level employee in Switzerland would receive as a pension, Dumur says.

A number of European countries have generous national health insurance, but these generally do not cover treatment abroad. Kuratli says the Swiss government would cover two-thirds of the bill for his wife’s care if she stays in Switzerland, but since high-end private clinics there can cost $15,000 or more per month, he could still end up paying more there than he would in Thailand.

Woodtli agrees that it is crucial “for the patients to be together with their carers, to know and trust.” He says Thai caregivers like those at Baan Kamlangchay are generally more emotionally and physically engaged with their charges.

At the swimming pool, Madeleine Buchmeier snaps photos and laughs as she watches a caregiver take her smiling husband’s hands to twirl around together in a dance out of childhood.

He used to sink when entering water. In the three weeks since they arrived, her husband has calmed down and can swim again, all while his medicine is being sharply reduced.

Geri used to bang his head against the walls of a care facility in Switzerland, says Madeleine, “as if he wanted to do something, get somewhere.”

Like Kuratli, Buchmeier is deciding whether her 64-year-old husband should stay or go back to Switzerland. Once a Ford Motor Co. employee who spoke four languages, he now mutters largely disjointed sentences but appears to recognize his wife.

Related Topics:Alzheimer’sWestern Countries Sending Alzheimer’s Patients to Thailand for Care
Up Next