In their quest to get high, drug addicts sometimes do terrible things, like attack their family members. Some parents try to arrest their drug-addicted kids; in the worst cases, they have even pulled the trigger to protect themselves.

Even though many drug addicts now have the choice of “free rehabilitation” instead of jail time, these problems still exist in Thailand.

The New Drugs Act in Thailand

Under the Narcotics Act B.E. 2564, which went into effect in November of last year, drug addicts are called “patients” and can avoid punishment if they sign up for free rehab. No matter how many drugs a suspect is caught with, they will be given help if they can prove they are not for sale.

Kosonlavat Intujunyong, a deputy director general at the Office of the Attorney General, told Thai PBS, “Drug addicts will only be prosecuted if they refuse treatment.”

Thailand has some of the world’s toughest drug laws, which has led to a high number of people in prison for drug crimes.

Under the new law, drug suspects who are ready to stop using drugs and go to rehab will also avoid getting a criminal record. At most, they will have to follow the rules like a travel ban, community surveillance, or a schedule for when to report. In reality, people who use drugs can live a pretty normal life and only have to keep going to rehab.

“Many crimes that happened recently could have been stopped if the drug addicts had gone to rehab,” said Kosonlavat. “Drug addicts need help from their families, and everyone in the family should sign up for treatment.”

Dr. Warot Chotipittayasunon, a Mental Health Department spokesman, said drug addicts’ families should step in if they don’t have the discipline to go to treatment programs independently.

“Call any hospital. If it doesn’t have drug treatment programs, the staff can suggest the next closest place that does,” he said.

Warot said that there was a good chance that people who were addicted to drugs would be able to stop using these programs. He warned them that they might return to their old ways if they returned to the same place and faced the same problems.

He said, “That’s why they also need help from other people.”

He also said that all drugs change how people think and that using them for a long time can hurt the brain. He said that the more damage there is, the harder it is to give up and return to normal life.

Until April 8, 144,110 people had been arrested for drug crimes in the first half of this year. During the same time period, they also got hold of 272 million methamphetamine pills, 8,691 kilograms of crystal methamphetamine, and 484 kilograms of heroin. Most drug addicts are teenagers.

A headman in a Northeast border province said that drugs were a problem in many villages. He also said that most local drug addicts are teenagers or adults old enough to work.

“We can tell who is using drugs, but there’s not much we can do about it,” a community leader said on the condition that he or she not be named.

He said he tries to get people to take drug-using family members to treatment programs, but most people don’t listen to him.

“In the last year, only one person has signed up for a program on their own,” he said.

He also said that most drug users say they need methamphetamine to work longer hours and make more money to take care of their families.

Even though there had been no reports of violent crimes done by addicts while they were high, he said that a worrying thing had happened recently, but he didn’t say what it was.

“We told the police, but they let the person go the next day.”

The headman thinks that different government agencies should work together to solve this problem. He also thinks they should start campaigns to warn people about the dangers of drugs.

He also wants the government to review the new drug law, which he says could be used by drug traffickers to get around the law by saying they only use drugs and don’t sell them.

The community leader also said something must be done to stop former addicts from returning to their old ways. 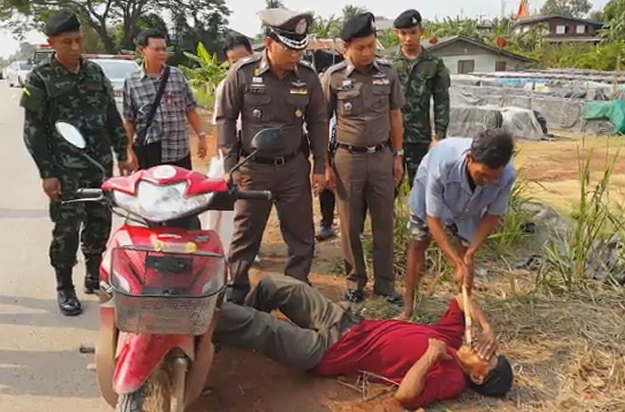 Trouble right outside your door

A recent news story told the story of “Bor,” a young man who graduated from college and moved home to take care of his old, partially paralyzed mother. But life in the village was anything but quiet. Late at night, a local junkie would often knock on his and his neighbours’ doors, yell at them and damage their property.

One night, the addict broke into the house and threatened Bor’s mother with a knife. Even though the police helped her, they did not arrest the attacker.

Bor said that after what happened, he decided to treat the addict more gently. So, one day when the man put out his hand, Bor took it. The man used the hand of friendship as a ruse to hit Bor in the face.

Bor was angry, so he grabbed a piece of wood and went after the person who hurt him. When he finally caught up to the man, he allegedly hit him once in the head, killing him.

Bor was accused of manslaughter, found guilty in court, and sentenced to seven years in prison.

During his appeal, he was helped by many people, including his boss, coworkers, the head of the village, and even some of his family members. The judge took three years off of his sentence and let him go free.

The main cause is poverty.

The head of the Women’s and Men’s Progressive Movement Foundation, Jaded Chouwilai, says that drug abuse is a common problem and that poverty is usually to blame.

He said that many people use drugs because they are worried about money or can’t find work.

As a result of the COVID-19 crisis, Thailand’s income gap has gotten bigger, and drug-related crimes are happening more often.

“Many people think drugs will help them get out of a tough situation,” Jaded said. “When people are stressed, former drug addicts often start using again.”

“The government shouldn’t just rely on the new law. Instead, they should deal with the real reasons people use drugs, like economic problems and how they affect society,” he said.

“Thailand’s Ministry of Social Development hasn’t done much about this problem. He said it should develop ways to strengthen families because when people feel weak, they often turn to drugs to escape their problems.