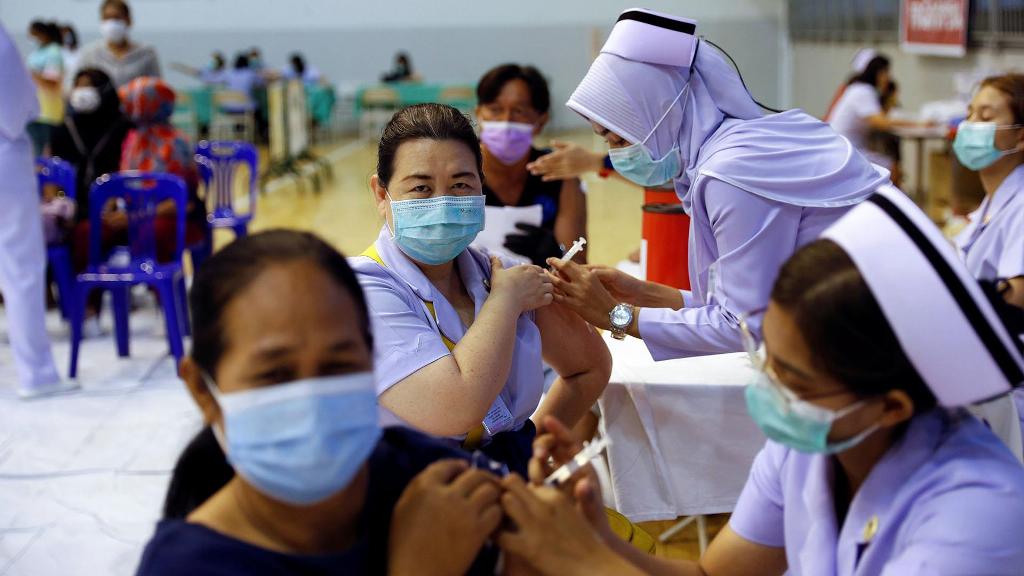 In their bid to curb the spread of COVID-19 in Bangkok, authorities are working with private bodies to have 25 vaccination centres by the end of May. Health officials are aiming for herd immunity by vaccinating 50,000 people per day.

On Sunday, Bangkok Governor Aswin Kwanmuang was in Central Plaza Ladprao in Chatuchak district to oversee the ongoing COVID-19 vaccination at the Bangkok Mass Transit Authority public transport drivers. The governor visited the centre with some officials from the Bangkok Metropolitan Administration (BMA).

The vaccination point was opened last week, making it the first immunisation centre outside a hospital. It works every day from 8.30am to 5pm and is vaccinating around 1,200 persons per day. Currently, there are three vaccination points at different locations in Bangkok – Samyan Mitrtown and The Mall Bang Kapi and Central Plaza Ladprao. The centres were jointly opened by BMA and the Board of Trade.

Registered health practitioners, along with at-risk frontline workers, such as bus drivers, teachers, garbage collectors and daycare centre staff, are currently being vaccinated. BMA and the Board of Trade aim to increase the centres in Bangkok to 25 by the end of May to make the inoculation accessible to the general public in June.

The 25 centres will achieve herd immunity once they all fully commence operations, as they will be able to vaccinate 38,000 to 50,000 persons per day. This will go a long way in meeting the Thai government’s target of vaccinating 5 million people in Bangkok within the next two months and 50 million nationwide by the end of the year. According to The Nation Thailand.

The 25 proposed locations for the vaccination centres are as follows:

Thailand has been battling with a new wave of COVID-19 since the more deadly U.K. variant of the virus was detected in the country in early April. As of Monday, May 17, 25 fatalities and 9,635 new cases, including nine overseas arrivals, were recorded. The recent spike is coming more from the prisons across the country, as no less than 6,853 of the new cases are from Bangkok prisons.

The total number of country-wide confirmed cases has now risen to 111,082.

The Thai government has an ambitious plan to vaccinate tens of millions by the end of the year and is also considering a walk-in plan due to the low uptake in the number of people registering for the mass vaccination plan set to roll out in June. A total of 100 million doses of the COVID-19 vaccine have been secured, and the government plans to get 50 million more.

Olusegun Akinfenwa is a correspondent for Immigration News, a news organization affiliated with Immigration Advice Service (IAS). IAS is a leading U.K. immigration law firm that helps people migrate and settle in the U.K.

Private Hospitals Told Not to Charge Patients for Covid-19 Treatment

Scientists Believe Ventilation Systems Linked to the Spread of Covid-19