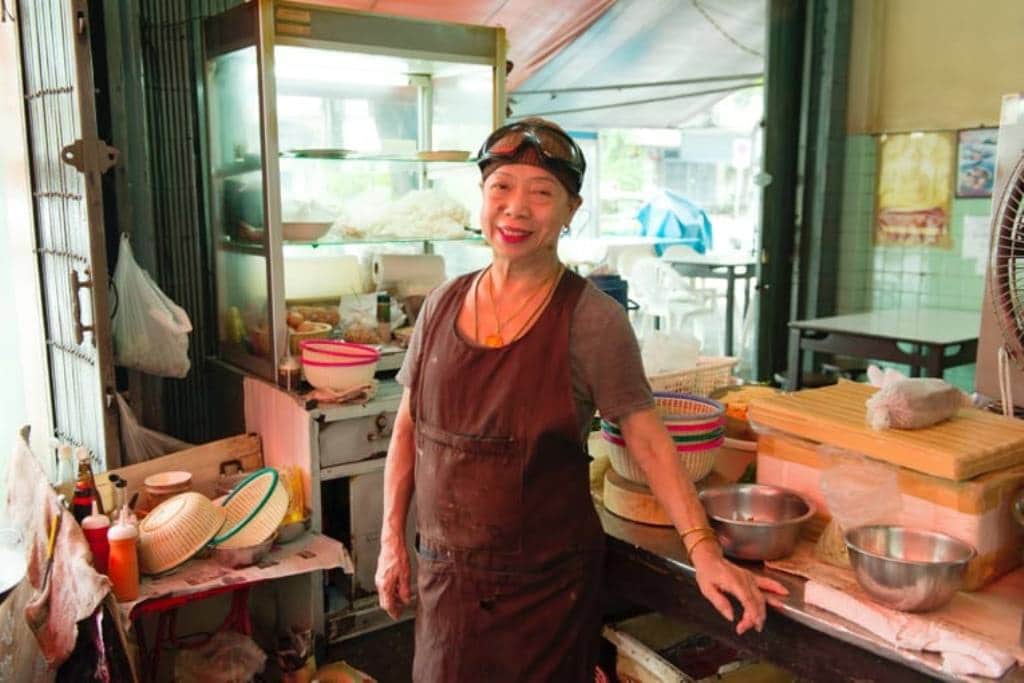 Few know Jay Fai by her real name, Supinya Junsuta, and fewer know that Jay Fai was a seamstress for years before losing everything in a fire. Ironically, it is near fire where you are most likely to find her these days, busy manipulating giant woks over charcoal fires, signature ski googles in place.

In 2019, she told CTN News that the goggles were because she “was old and my eyes required surgery”. The surgery required her to rest her eyes and she needed to wear glasses. This resulted in Jay Fai wearing ski goggles “to protect my eyes when cooking”, as she put it.

The petite lady, whose shophouse earned a Michelin star in 2018 and has continued to do every year since, was once again in the spotlight. Bangkok’s street food queen, as she is popularly known as, was named the winner of the prestigious Icon Award — Asia 2021 at Asia’s 50 Best Restaurant Awards, which was held virtually on March 25.

Jay Fai has been cooking at her open-air shophouse for more 40 years, turning her modest restaurant into a coveted destination for gourmets, chefs, celebrities and VIPS from within Thailand and across the world. Jay Fai honours Bangkok’s much-admired street food culture by sourcing only premium ingredients for her dishes and applying cooking techniques she has developed over decades.

The late Bangkok Post food critic Ung Aang Talay once noted that she has the ability to “transform very ordinary, lunchtime-at-the-market dishes into masterpieces of local cuisine”. The 76-year-old’s celebrity status was reinforced in 2019 when Netflix launched its Street Food: Asia series and devoted its premiere episode to the veteran cook.

Accepting the Icon Award, Jay Fai says, “I am grateful to be recognized for my hard work and craftsmanship. This is truly the reward of a lifetime for an ordinary chef like me. But most importantly, I hope everyone can learn from my story that dedication, hard work and patience can help you achieve your goals.”

When I asked her what her future plans were, since to most she seems to be at the pinnacle of her career, she replied, “As a working woman who has been working almost every day of my life, I hope to spend more time with my family in the near future. Live a simple and peaceful life as a wife, mother and grandmother.

“I have never been able to give that to my family before. Since I became a mother, I’ve had to watch my kids grow up from afar, raised by others. That feeling tortured me every day and it has always been on my mind till now. I never slept well when my kids were away. Right now, I just want to stay close to my family and be there for them. That’s all I wish for.”

Born to Chinese immigrant parents, Jay Fai worked as a seamstress for 10 years before tapping into her culinary talents once she started working alongside her mother and sisters selling rice porridge and chicken noodles from their food cart. To distinguish herself from other street vendors, she developed new skills and recipes, as well as experimenting with premium seafood. Woking over a hot stove

The self-taught cook mastered Japanese omelettes and later used those techniques to create her signature crab dish. Despite charging higher prices than other street food vendors, Jay Fai has attracted a devoted following with her generous portions, impeccable food quality and exuberant energy.

Jay Fai usually opens her shop around 3pm. But these days, no matter how early you get to Mahachai Road, she will be there “woking” over a hot stove, not a sweat bead in sight and as calm as ever. Even in the Covid era, there is still much of a fan following with locals and expats hoping to catch the crab omelette genius in action.

The cook, who Ung Aang Talay once extolled as the “Mozart Of The Noodle Pan” — is just as interesting as her cuisine. She once told the Bangkok Post that “if we cook using the same traditional methods, we don’t need to change or improve anything. But in this day and age, people change. With this change in lifestyle, the food changes too — whether it would be change in flavour or how we cook, food evolves over time.

Though an iconic figure on Mahachai Road, the business may soon have to be passed down to her daughter. “It would have to be my daughter,” she says, “but the restaurant will have to change the way I run things to make it easier and more comfortable for her to take charge.”